Inventor, painter, architect – was there anything that Leonardo Da Vinci couldn’t do?  Perhaps the most famous name to emerge from the European Renaissance, Da Vinci helped to change the world forever in just a few simple ways.  But how much about his life and work do we really know?

In this quick fact file, we’ll take a look at the trivia behind his life and some of his best work. 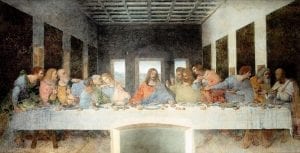 Do you know any interesting facts about Leonardo Da Vinci? Share them in the comments below!