If you’re new to this fantastic sport or are considering trying, here are 29 fun facts about SCUBA diving:

1. What does SCUBA mean?

SCUBA is an acronym, and stands for “Self Contained Underwater Breathing Apparatus”.

2. The invention of the Aqua-Lung

It was in 1942 that Jacques Cousteau and his partner Émile Gagnan designed the first successful valve system to supply divers with compressed air, known as the Aqua-Lung.  Today this is known as an open circuit system.

3. Where are the best scuba diving locations?

It’s said that Asia, the Red Sea, and the Great Barrier Reef are some of the world’s best scuba diving locations. The diverse colors and marine wildlife are so remarkable in all these locations that people find themselves returning over and over again. 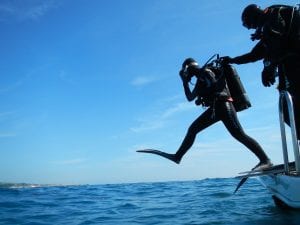 Many people wrongly believe that the air in the scuba diving tanks is pure oxygen, but that would poison the diver!

6. What do SCUBA divers breathe?

The air SCUBA divers breathe is actually a mixture of compressed gases. Typically, 21% oxygen and 79% nitrogen.

Surprisingly, oxygen becomes toxic on dives deeper than 42 meters.  Commercial and technical divers use a special mixture of oxygen, helium, and nitrogen (Trimix) during the deep phases of dives.

Nitrogen narcosis, also known as ‘narks’ is a symptom that occurs to divers at depths of over 30 meters.  The increased pressure alters the state of the oxygen and nitrogen and breathing these gasses can make a person feel uncomfortably drunk and at worst, fall in to a coma and die.

Divers need to be certified to breathe these other gas mixes, called Nitrox and Trimix. 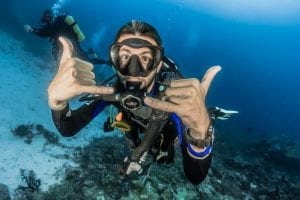 Caisson’s Disease also known as decompression sickness is a more serious effect of nitrogen when nitrogen starts to form bubbles in the diver’s body.

Do you want to buy all the right diving gear? Just for starters, you’ll need a wetsuit, fins, a mask, weights, a regulator, an octopus (a backup regulator) a tank, and a BCD. You can usually rent all of this from any good dive shop.

The average diver burns around 600 kilo-calories per hour in temperate waters. This is due to the large effort on the body to maintain its temperature. In fact, while scuba diving your body burns more calories per minute than during many other sporting activities. 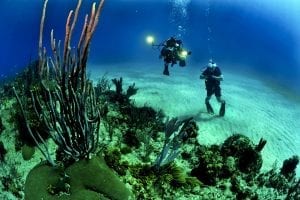 PADI stands for Professional Association of Diving Instructors and is one of the world’s best-known recreational diving associations that teach safe SCUBA diving techniques.

After the PADI Open Water Diver course, the most popular speciality is Underwater Photographer. 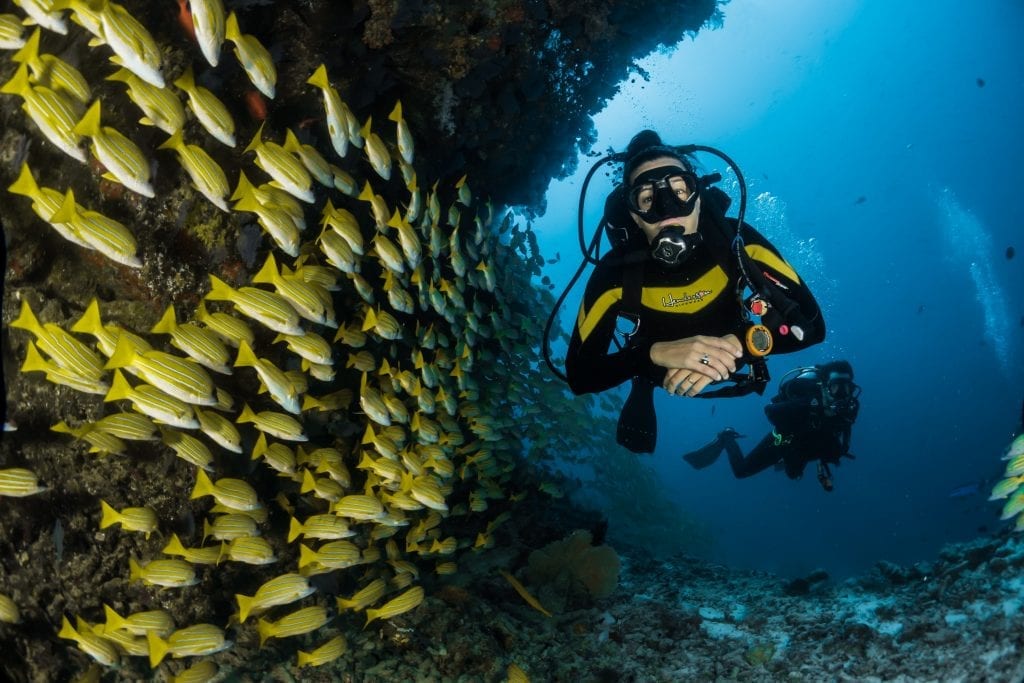 Coral reefs support more marine life than any other environment. The largest coral reef in the world is the Great Barrier Reef, Australia. It’s so large that it can be seen from space!

An important rule in scuba diving is to stay safe. So, don’t be tempted into buying diving equipment and simply giving it a go without the proper training. 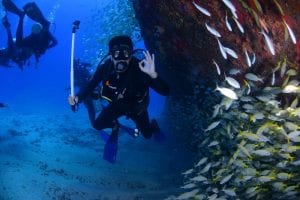 The limit for recreational SCUBA divers is 30 meters (100 ft). Advanced recreational diving limits are set at 40 meters (130 ft), but if you want to go even deeper, special training or a specially trained companion is required.

20. Accidents are a rare event in scuba diving

According to Diver’s Alert Network (DAN), accidents happen only once every 211864 dives, even though scuba diving is considered a risk sport. No wonder, the most common scuba diving injury is a broken toe.

21. When can you start scuba diving?

Once children have reached the age of 8 years, they can learn to dive. The limiting factor is that they must be able to carry their equipment. 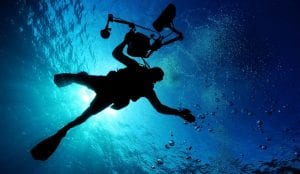 British divers during World War II were already using what they called a “Nitrox Rebreather” at a depth of 30 m. It was one of the best-kept secrets by the Royal Navy for a long time.

23. The deepest SCUBA dive ever

The Guinness World Record for the deepest SCUBA dive ever is held by Egyptian, Ahmed Gabr. He dived to a mind-blowing 332.35 meters in the Red Sea!

Once you dive past a depth of more than 10 meters, natural light has absorbed to the point that red and yellow colors are no longer visible. If you’re taking pictures, you’ll need an underwater torch or a red filter for your camera. 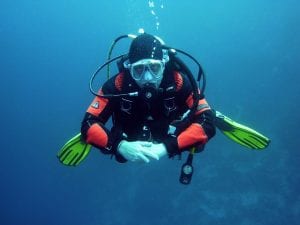 25. Learning about the underwater world

The art team behind “Finding Nemo” – one of the most successful and memorable Pixar animated films – didn’t leave anything to chance. They took scuba diving courses in oceanography, marine biology and more, to understand the underwater world better.

If you spit in your dive mask before the dive, it will prevent the mask from fogging. This is because the spit covers the lens and the layer will be too smooth for the condensed vapour to hold on to. As an alternative, you can use soap or detergent.

Sound travels five times faster underwater than it does through the air. This makes it almost impossible to ascertain where the sound is coming from, as we rely on the time difference between our ears to do so. 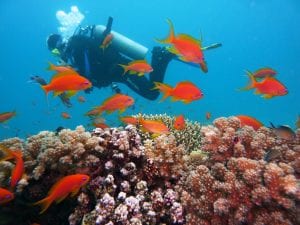 Did you know there’s a 20 meter club? It’s the diving equivalent of the mile high club.

Do you have the nerves to dive with large sharks? There are a few places in the world where you can get yourself sealed into a steel cage and lowered into shark infested, chummed water.. That should certainly get your pulse racing!

Yes! In fact, you often don’t need to swim to get a diving certification. Oddly enough, the two things are very much separate.

Is learning to scuba dive scary?

It can be! However, it does take time to learn how to scuba dive properly, and as such, there is always going to be some fear involved. Take your time!

How do you relax during scuba diving?

Think pleasant thoughts and remind yourself it’s safe - and just marvel at all that wonderful underwater life!

Do you know any fun or interesting facts about Scuba diving?  Share them in the comments below!

Are you fascinated with all things underwater? Check out these amazing facts about coral reefs