Tortoises are fascinating animals with a distinctive appearance – and they are perhaps best known for being pretty slow movers! They are easy to care for as pets – great for beginners and kids alike! There’s more to these critters under their shells than they might let on, however – so let’s eye up some fun facts about tortoises you’ll want to remember.

1. Their shells are made of interesting bits and pieces.

Tortoise shells are made of keratin. This is the same material that makes fingernails and horse hooves!

A group of tortoises – fittingly – is called a creep! They creep along – hence the name, we can guess!

3. Tortoises are not social animals.

It’s very unlikely you will see creeps of tortoises in the wild – they prefer to stick to themselves, and ‘fly the nest. 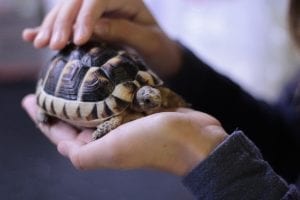 4. Is it possible to age a tortoise?

5. Tortoise shells can differ depending on where they live – it’s all about camouflage…

Studies show that there is a direct link between environments and the shell colors of tortoises! For example, tortoises living in the Sahara Desert have golden yellow shells, meaning they are camouflaged in that domain.

7. Where no tortoise has gone before…

In 1968, Russia sent tortoises into space! That’s a speed they probably weren’t expecting…

8. What is the Jacobson organ?

The Jacobson organ is situated on the roof of the mouth of tortoises. It is used to distinguish between different smells.

In certain faiths, tortoises are considered to be good omens. They are thought to bring good luck, good health and even inspire longevity! 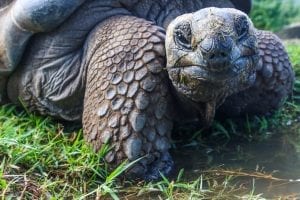 10. They can and will make a break for it if they can.

Tortoises can climb and can be escapologists! It is recommended that you don’t underestimate their athletic ability!

11. How do you tell tortoise genders apart?

Telling the genders of tortoises apart isn’t easy. In fact, the best way to tell whether you have a male or female tortoise is to look at its size – males tend to grow to be much bigger than females!

12. Who was Harriet the tortoise?

Harriet was the name of a very special tortoise. Charles Darwin discovered her in 1835! Harriet was a Galapagos tortoise who lived until 1965 – she was around 175 years old when she passed!

13. Tortoises live for a looooong time.

It’s not actually uncommon for tortoises to live for such a long time – slow living, it seems, helps you live for longer! That’s clearly the secret… 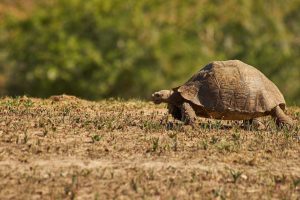 Ever wondered what those interesting scales on a tortoise’s shell are called? They are technically known as scutes.

15. These critters have been a part of the ecosystem for millions of years.

Tortoises have been around for a very, very long time. They are said to predate many birds, and even the likes of crocodiles, who were ‘left over’ from the age of dinosaurs! 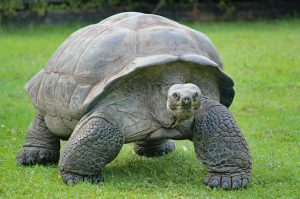 Can tortoises bite you?

Yes - however, it’s not very likely. More often than not, a tortoise will bite you completely by accident if you are feeding it - they also bite things to see if they can eat them, so keep your fingers away!

Why do tortoises make such good pets?

Tortoises are very rewarding pets - they are fascinating despite being slow and docile, but at the same time, they are not complicated to look after.

Are tortoises known to eat meat?

No - not really. Some sources suggest yes, but on the whole, they will eat greenery. That said, they are not picky eaters.

Do you know any fun facts about tortoises?  Share them in the comments below!