Jaguars are some of the fiercest creatures the wild has to offer. If you’re looking to expand your knowledge of these beautiful cats, here are some interesting facts about jaguars:

1. Jaguars are related to panthers.

Scientists call the Jaguar Panthera Onca. The name is partly derived from Panthera, which is the creature’s genus.

With a maximum shoulder height of 75cm and a length (head to body) of 240cm, the Jaguar is one of the largest cats in the world, only losing to the tiger and the lion in size. But that is on a global scale. If you only look at the Americas, then the Jaguar is the largest.

3. They tend to live in South America.

If you’re dying to see Jaguars, Brazil is the best place to find them. If you have some free vacation time, target the period between April and November. This is when the seasons in Brazil get dry and that matters because it concentrates the prey which, in turn, draws the Jaguars out, and as such you are more likely to be able to see this beautiful cat. 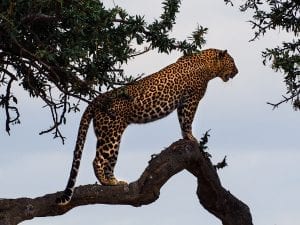 4. Jaguars live in a variety of places.

But that doesn’t make Brazil the only source of Jaguars. They frequent rain forests, swamplands, and wetlands. They prefer regions with an affinity for water and dense foliage. As you might have guessed, they appreciate the cover when stalking prey.

The large cats tend to frequent America (North and South), Mexico, Argentina and the areas in between.

5. What’s the difference between a jaguar and a leopard?

Jaguars are sometimes confused with leopards. First of all, you rarely find leopards outside of Asia or Africa. Secondly, while they share some similarities, the Jaguar is larger. While they both have spots, a Jaguar has rose-like spots called rosettes The same could be said for a leopard’s spots. But in the case of the leopard, there are no spots in its rosettes.

It is worth noting that, in terms of behavior, the jaguar and the tiger mirror one another.

7. What is a black panther?

When people use the term ‘Black Panther’, sometimes they are referring to a Jaguar. Other times it can refer to a leopard. But there are jaguars out there with what people call a melanistic gene.

Jaguars are solitary creatures. They prefer to live on their own. The same goes for hunting. They only gather with other jaguars for mating purposes.

The jaw of a jaguar is so strong that its bite can crack the shell of a sea turtle. It can also pierce a skull. 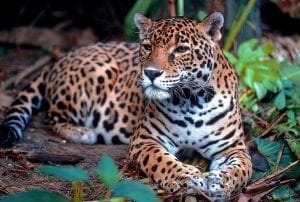 Jaguars are aggressively protective of their territory, even more so if females live within it. They not only mark it with a scent but they will defend it from the advances of other male Jaguars.

Jaguars are surprisingly good at climbing trees. They tend to use the height advantage trees offer to surprise unsuspecting targets.

Despite their affinity for trees, jaguars are decent swimmers. 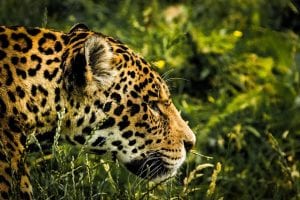 Jaguars love to stalk and ambush their prey. They are often seen jumping from trees or surging out of the water to catch their prey off guard.

14. They can live for around two decades.

A Jaguar’s natural lifespan in the wild ranges between ten and fifteen years. But that figure jumps to 20 years for jaguars in captivity.

The eyesight of a jaguar is six times better than a human’s eyesight at night. You can blame this on a layer of tissue in the cat’s eye. 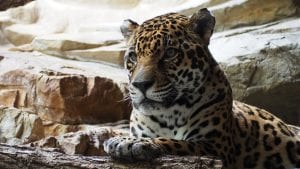 For many ancient cultures (Mayans, Aztec, etc.), the Jaguar was a symbol of strength.

Can a jaguar kill a human?

Thankfully, jaguar attacks on humans are rare - however - an attack from a jaguar is likely to be fatal.

Jaguars are extremely intelligent - in fact, they are often seen as a symbol of intelligence.

Can a jaguar be tamed?

It could take a long time to tame a jaguar - after all, they are wild animals, and this is not to be attempted.

Do you know any interesting facts about jaguars?  Share them in the comments below!

Are you fascinated with big cats? Check out these terrific facts about tigers