Sometimes referred to as sea cows, manatees are funny-looking beasts – all blubber and slightly egg-shaped! However, the manatee is one of the most fascinating critters you’ll find beneath the water. Slow and steady, they appear cuddly and cute – but what else are they known for?

1. There are more manatee species than you might think.

There are three distinct types of manatee, as well as dugongs – West African, Amazonian and West Indian.

2. They are truly enormous!

The average manatee is likely to weigh five or six times the bulk of an average human being. You’ll find manatees which weigh as much as 1,200lbs. That’s as much as some dairy cows!

3. Most of a manatee’s bulk is down to innards!

It’s a common misconception that a manatee is all fat and blubber. In fact, the majority of their bulk is due to the sheer size of their digestive system. Therefore, they don’t actually have much fat to protect them against the cold. 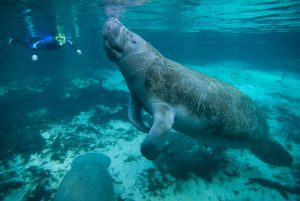 The word ‘manatee’ derives from ‘manti’ in Carab, which roughly translates to ‘udder’. No wonder, then, that people refer to them as sea cows!

A manatee is actually capable of swimming along at a maximum of 15mph! However, it’s much more likely you will find sea cows bobbing about around 5mph. Even so, they are much nippier than they appear.

6. They can be very long critters, too.

You’ll generally find that manatees range from eight to 13 feet in length.

7. They live free and easy.

Manatees are non-territorial beasts, and they can couple up. However, they can also be solo foragers, looking for vegetation to snack on.

It’s likely the average manatee will consume around 10% of its weight in plants, grass and algae each day. In fact, they spend around half of their daily lives foraging for food.

Manatees are not known to be hunted by any specific predators. However, they are threatened by human intervention. Many manatees sadly perish due to boat accidents, though humans have hunted them for centuries. 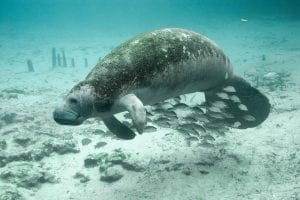 10. Are they the start of the mermaid legend?

Christopher Columbus once wrote in his travel logs that he spotted mermaids out at sea. However, using other data from fellow explorers, it seems that he may have simply found a manatee or two out at sea!

Manatees are extremely gentle and passive, thanks to having no direct predators.

12. Manatees can survive for 20 minutes underwater.

They will generally surface to breathe in air every three to five minutes, but they can survive for up to 20 minutes below the waves. 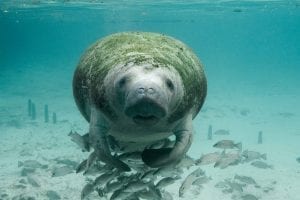 A West Indian manatee is thought to be able to live up to 60 years of age, possibly longer.

14. They may be endangered.

It’s thought that there are less than 6,000 manatees living in the wild today, though this number may be decreasing.

15. Did manatees start out on dry land…?

It’s believed that manatees actually evolved from ancient mammals which once lived on the land. However, these current beasts have no need to head to dry land, and therefore stay in the water. 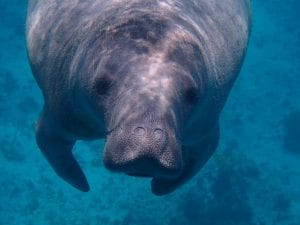 Manatees are, in some ways, thought to be able to give dolphins a run for their money in terms of brain training and testing. However, they are said to be trickier to motivate!

Is it illegal to touch a manatee?

In many cases, you will not be allowed to touch a manatee if you see one or if one comes onto your boat. That’s because they will learn to keep visiting people and boats! While sweet, it can be a dangerous habit.

Is it okay to swim with manatees?

Yes! Manatees will not harm you, however, there are not many places in the world where it is currently legal to swim with them.

Can manatees live on land?

They don’t need to! They don’t even need to breathe that much, either.

Do you know any fun facts about Manatees?  Share them in the comments below!