Is there a more iconic British river than the Thames?  It runs through the heart of London, and what’s more, it plays a part in one of our most iconic backdrops.

1.   The spring of the River Thames is NOT In London

The Thames actually starts out in Gloucestershire! Though most of us associate the river with our capital city, you’ll find the source in a country meadow.

2.   The River Thames is longer than you think

The Thames stretches a length of around 215 miles, or 346km. You have to wonder who had the time to measure it!

3.   Seriously, it even has the longest river walk

You’ll also find the famous Thames Path which runs alongside, though it doesn’t stretch the whole trail of the waterway. It is an impressive length, however, at 184 miles or 296km. Official sources say it’s the lengthiest river walk of its kind on the continent. 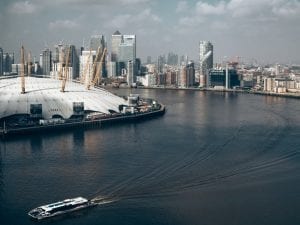 4.   The River Thames is fairly deep

The river is thought to be around 20m deep. It’s a fair dive!

5.   The River Thames has many ancient bridges

6.   However, you can find the longest one in its London collection

The longest bridge in the London collection is Waterloo, which spans 1,250ft, which is almost a quarter of a mile long.

It’s famously been the backdrop for many action movies based in London. However, did you know that it modelled for Venice in Indiana Jones and the Last Crusade?  That wasn’t the famous Italian waterways, but Essex’s Tilbury docks.

8.   Many different species dwell in the river

The river is thought to be home to an extremely rare species of seahorse! Research is ongoing.

In fact, at the time of publication, there are over 125 different species of fish which live in the river’s tidal section.

Around two-thirds of all drinking water in the city of London comes directly from the river. Don’t worry – it’s filtered! 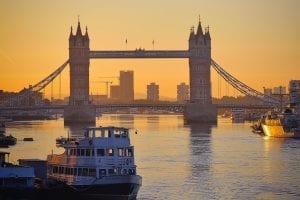 10. ..Thanks to none other than Sir Joseph Bazalgette

However, you might want to put down the glass after this foul fact – the Thames used to be a repository for toilet waste until 1865. It was around this time when Sir Joseph Bazalgette came to the rescue with his famous sewer systems.

11. At one point The River Thames was quite a stinker

The foul use of the Thames led to ‘The Great Stink’ of 1858, which apparently resulted in Parliament suspending. The smell really was that repulsive!

12. In the past The River Thames used to freeze!

The Thames used to completely freeze over! In the winter of 1683, it actually froze for two months, with ice of around 11 inches in thickness.  People used to hold ‘Frost Fairs’ on the river up until the 19th century! 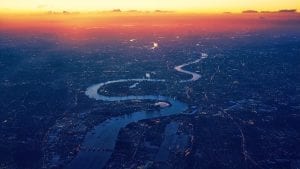 The ice was that strong, someone took an elephant through the frozen river cascade.

14. The River Thames inspired many writers

Kenneth Grahame, who wrote the world-famous Wind in The Willows children’s books, is said to have based much of the book’s scenery around the Thames. In fact, you can see what many assume to be the inspiration for Toad Hall on route, at Mapledurham House.

15. The Thames can also be seen in plenty of famous paintings

The Thames is the subject of many paintings. Claude Monet, the famous French Impressionist, actually painted the river three times!

FAQs about The River Thames

Is it safe for me to eat fish from the River Thames?

Although the river is currently the cleanest that it has been in centuries, and some would suggest that eating fish from the River Thames is perfectly safe, others would suggest otherwise! Remember that the Thames is extremely busy - so take care if you want to fish.

Is it safe for me to swim in the River Thames?

Swimming in the tidal section of the River Thames is not only very dangerous, it is also prohibited for the safety of all swimmers and anyone using that section of the river.

Are bodies often found in the Thames?

Sadly, yes. Dead bodies are sometimes found in the Thames, with an average of about one body per week being discovered.

Do you know any interesting facts about The River Thames?  Share them in the comments below!

Are you fascinated with The River Thames?  Check out these brilliant facts about the Thames Barrier…

⛵ 17 Fun Facts about The Mississippi River