Uranus has intrigued astronomers for centuries, but many people don’t share the same fascination. We guarantee that you’ll be curious about this icy planet once you read these 19 fun facts about Uranus.

1. Uranus is an ice giant

It’s no wonder that Uranus is called a “giant” planet. As the third-largest planet in the solar system, Uranus as an equatorial circumference of 159,354.1 km, compared to the Earth’s 40,030.2 km. If the Earth were the size of an apple, then Uranus would be the size of a basketball.

Uranus is the fourth heaviest planet, with a mass of 8.68 x 1025 kg. But despite its size, Uranus isn’t dense. In fact, Uranus is the second least dense planet after Saturn.

3. It’s the second-farthest planet from the Sun 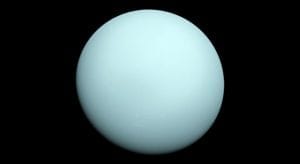 It’s hard to see Uranus without the aid of a telescope. Most people could only see the five brightest planets (Mercury, Venus, Mars, Jupiter and Saturn), while Uranus and Neptune are beyond the reach of the naked eye.

In fact, Uranus is the first important celestial body to be discovered using a telescope. In 1781, astronomer William Herschel used his new telescope and came across a “star” that wasn’t plotted in the charts. Initially called a comet, Uranus was universally accepted as a planet two years later.

Because it’s an ice giant, Uranus doesn’t have a rock-solid surface as Earth does. Instead, its surface has swirling icy fluids. In fact, Uranus’ planetary temperature is at least -224.2°C (-371.56°F), and in some regions, Uranus is colder than Neptune, which is farther from the sun. No metal spacecraft would survive these temperatures.

6. Uranus has supersonic winds, too

7. It rotates in the opposite direction

Uranus is one of two planets that rotate on the opposite direction as Earth (the other being Venus). The planet spins from east to west and completes a rotation in 17 hours and 14 minutes. This means that a day on Uranus is about 7 hours shorter than a day on Earth.

8. Uranus spins on its side

What sets Uranus apart from other planets is that it spins on its side, giving it a funny, sideways look. Uranus has an axial tilt of 97.77°. This is also the reason Uranus’ rings seem to be upright in some illustrations of the solar system, unlike Saturn’s rings, which are tilted to an angle.

9. Uranus orbits the Sun once in 84 Earth years

Uranus makes a complete trip around the sun in 30,687 Earth days or about 84 Earth years. 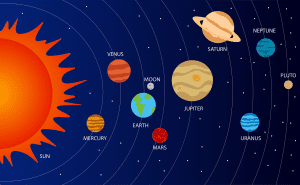 10. Some parts receive sunlight for 42 years

Uranus’ unique, sideways tilt means that its north and south poles experience extreme seasons. Since Uranus lies on its side, its poles are located where the Earth’s equator would be. One of the poles faces the sun directly, resulting in about 42 years of direct sunlight, followed by 42 years of darkness.

Uranus isn’t hospitable to life. Its freezing temperatures and high pressures make it impossible for humans to settle there. Even a spacecraft won’t find anywhere to land because the surface is icy liquid.

12. Uranus is the only planet named after a Greek god

Another little-known fact is that Uranus got its name from a Greek deity, unlike other planets’ names, which came from Roman gods. In Greek mythology, Uranus was the god of the sky, the father of Cronus (whose Roman equivalent is Saturn) and grandfather of Zeus (whose Roman counterpart is Jupiter). 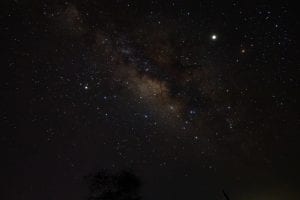 13. Its name was supposed to be Georgian Sidus

Uranus’ discoverer Herschel proposed the name Georgian Sidus after King George III. But the name wasn’t popular among the scientific community. Another astronomer, Johan Bode, proposed the name Uranus, which was accepted and finalised.

Uranus’ strange planetary characteristics might have resulted from a massive collision with another object. A protoplanet about twice the Earth’s size might have crashed into Uranus about 4 billion years ago, causing it to tilt sideways.

15. NASA came close to Uranus once

The 27 moons of Uranus are:

The inner moons of Uranus are half water-and-ice and half rock. Meanwhile, the composition of the outer rings remains unknown, but scientists theorise that they are likely captured asteroids.

The names of other planets’ moons came from Greek or Roman gods, but Uranus is different. Its moons got their names from characters written by William Shakespeare and Alexander Pope.

Uranus’ largest moon is Titania, which is about 2.2 times smaller than the Earth’s moon.

How is Uranus actually pronounced?

It’s technically pronounced ‘UR-UNUS’ - but the ‘rude’ way of saying it, ‘UR-A-NUS’, tends to be more common.

What’s so special about Uranus?

The equator of Uranus has a right angle - it’s on a tilt!

What caused the Uranus tilt?

It’s thought that the equator tilt on Uranus occurred as the planet may have been struck by something massive, thousands and thousands of years ago.

No - landing on Uranus would pretty much crush a human being as a result of the atmospheres.

Is Uranus a cold planet?

Yes, very much so! Uranus is said to reach around -353 F at its absolute coldest, chilly stuff!

Why is Uranus blue?

The color of Uranus is said to come from the methane gas, traditionally red, absorbing into the atmosphere.

Did we miss any interesting fact about Uranus? Share them with us below!

If you want to further explore the universe, check out these spectacular facts about space.