Were you born in this beautiful country or planning a trip of a lifetime here? Take a look at these fun facts about New Caledonia to test your local knowledge!

New Caledonia is a French archipelago in the South Pacific Ocean.

Its nearest neighbors are Solomon Islands to the northwest, Vanuatu to the north, Wallis and Futuna, Fiji and Tonga to the east, New Zealand to the south and Australia to the west.

The stunning sandy beaches and crystal clear waters of New Caledonia are pretty amazing; to find yourself here, follow the co-ordinates 21.2500° S, 165.3000° E for your very own New Caledonian adventure!

3. There are beaches and mountains galore.

The terrain here is dominated by stunning coastal plains with mountains further inland.

5. But the population is fairly sparse!

6. What’s the capital of New Caledonia?

New Caledonians enjoy a tropical climate with hot and humid summers, followed by a rainy season from December to February.

There are 22 species of bird endemic to New Caledonia, including the New Caledonian Crow which is known for making its own tools!

New Caledonia boasts the second longest double barrier reef in the world, with a length of more than 900 miles! 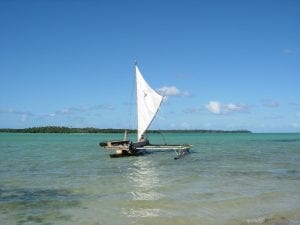 The official language of New Caledonia is French, although there are 33 local dialects also spoken here!

Before you set sail for New Caledonia you’ll want to pack a few CFP Francs, the official currency here. 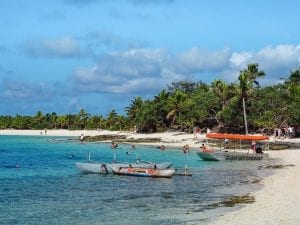 13. What does New Caledonia produce?

Its industry consists of tourism, nickel mining and smelting.

What is New Caledonia famous for?

New Caledonia is best known for its barrier reef, one of the world’s largest tropical lagoons. Sounds perfect for snorkelling and scuba divers!

What kind of food do they eat in New Caledonia?

Bougna is a traditional feast dish in New Caledonia. The ingredients usually include taro, yam, sweet potato, banana, and pieces of either chicken, fish, crab, prawns or lobster.

Is New Caledonia part of the European Union?

As a special collectivity of France, New Caledonia falls under the territory of the European Union - even though its 20,000km from Metropolitan France!

Do you know any fun facts about New Caledonia?  Share them in the comments below!