Most people shiver at the thought of crocodiles, and for good reason. These creatures are among the most dangerous in the world. And yet people are also fascinated by them… perhaps because they look like the remnants of a bygone era.

Here’s 20 fun facts about crocodiles that might leave you scratching your head:

1. Crocs can grow to be massive!

Crocodiles can reach 6.17 meters in length and a ton in weight. They are the largest reptiles on Earth.

That being said, some crocodiles are small. These are called dwarf crocodiles, capable of reaching 1.9 meters in length.

3. Crocs can be found just about everywhere.

You can find crocodiles on almost every inhabited continent, though thankfully that doesn’t include Europe! 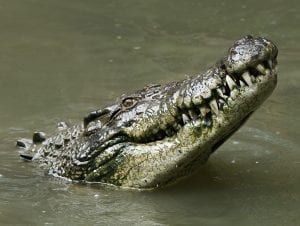 These creatures are far from new. They have been on the planet for over 240 million years.

5. They’re related to a mixed menagerie.

There is a close connection between birds, dinosaurs, and crocodiles.

They can live for sixty or seventy years, which is quite long. If you believe the stories, some crocodiles can reach a hundred years, and possibly even exceeding that.

7. Crocodiles were once dinosaur-sized.

The crocodiles from 250 million years ago were massive, more akin to dinosaurs.

Crocodiles have the strongest bite, capable of exerting 3,700 psi when they slam their jaws shut.

9. However, there’s a way to overpower them.

Despite their powerful bite, you can keep their jaws shut using your hands. This is because the muscles they use to open their mouths are small and weak. 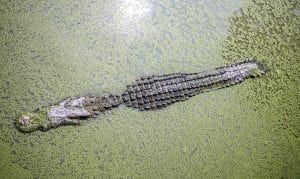 Crocodiles love to hunt in the dark because they have very good night vision.

Crocodiles are carnivores – they only eat meat. They have 24 ridiculously sharp teeth that will tear other animals apart before swallowing them. They tend not to chew.

12. They have an interesting digestive system.

They will swallow stones that settle in their stomachs to grind the food they swallow. 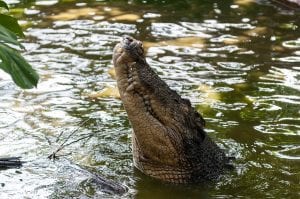 13. Crocodiles breed in warm areas for a reason.

As cold-blooded animals that do not have the option of generating their own heat, you tend to find crocodiles in tropical areas and near wetlands.

During long periods of drought and winter, crocodiles will dig burrows in river banks, slip in and hibernate.

15. Crocodiles stay open-mouthed for a reason.

Have you seen crocodiles resting with their mouths open in the summer? They look threatening but that isn’t their intent. This habit is designed to help them cool off by releasing the heat in their bodies through the mouth. This is a consequence of the absence of sweat glands 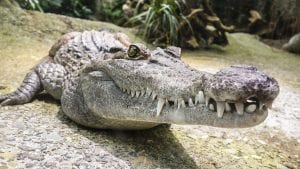 16. Don’t disturb a crocodile during mating.

17. Young crocodiles struggle to get by.

Most baby crocodiles do not live long. They fall prey to large fish and hyenas. Monitor lizards and much larger crocodiles will also eat them.

18. Shooting a crocodile won’t help you. 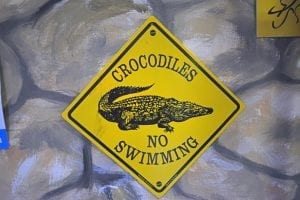 19. They are amazing swimmers.

If you wish to escape a crocodile, stay out of the water. Their powerful tails make them strong swimmers that can reach 25 miles per hour.

Despite the well known phase ‘crocodile tears’, crocodiles don’t cry. Sometimes, when they are eating, they will swallow so much air that it touches the glands that produce tears. This results in tears flowing, but they’re not actually crying. 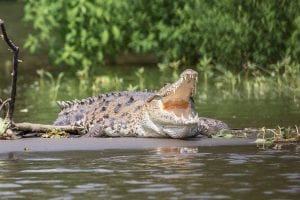 Are crocodiles more dangerous than alligators?

Crocodiles can be considered more dangerous than alligators as they are often much more aggressive.

Are there any animals that can kill crocodiles?

Crocodiles can actually be prey for many animals, such as leopards and some big snakes.

Studies show that crocodiles can be incredibly intelligent - they can even use tools to hunt!

Do you know any fun facts about crocodiles? Share them in the comments below!

Still hungry for more crocodile facts? Check out our facts post on the differences are between crocodiles and alligators