Do you have friends or family living in Iraq that you’d like to surprise with your local knowledge? Then check out these 14 interesting facts about Iraq!

Iraq is a large, desert country in Western Asia.

2. Here’s where to find it with a compass.

\The terrain here is mostly broad desert plains, with mountains in the north and east. 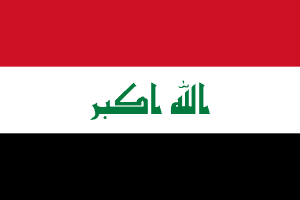 4. Compared to Britain, Iraq is massive.

5. However, it’s sparse by comparison.

Iraq’s population was 40.22 million in 2020…that’s around half the UK population!

6. What’s the capital of Iraq?

8. Sand storms are a big problem out here.

Sand and dust storms can occur for up to 50 days a year in Iraq. Theses sand storms can reach around 50 feet high, whilst dust storms have been recorded at an incredible 3,000-6,000 feet high!

9. What do people speak in Iraq?

The official languages of Iraq are Arabic and Kurdish, although Turkoman, Assyrian and Armenian are also spoken here. 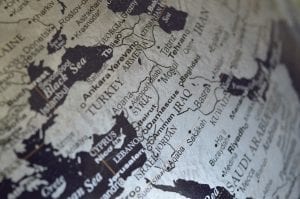 Iraq has, on occasion, been plagued by swarms of 40-80 million locusts that can travel more than 8 miles per day!

11. Some of the beasts here can kill without a second thought.

One of the most venomous snakes in the world, the Saw-Scaled Viper is found in Iraq!

12. Time to change up your currency. 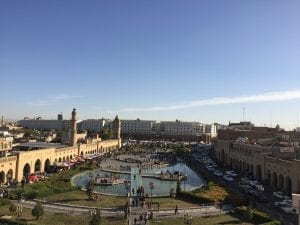 13. The life expectancy here is about average.

14. What are the main industries?

Its industry consists of petroleum, chemicals, textiles and construction materials. 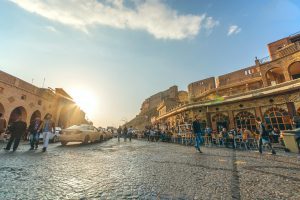 Is it safe to visit Iraq?

Right now, it is not considered safe to visit Iraq - so take caution.

What is the safest city in Iraq?

Kurdistan is widely regarded as the safest city in Iraq right now.

What is Iraq famous for?

Iraq is famous for its rugs and carpets, as well as for its architecture.

Do you know any interesting facts about Iraq? Share them in the comments below!