Liberia is a captivating country filled with rich culture, fascinating flora and fauna, and a turbulent history.

With a beautiful Atlantic coastline and bordering Guinea, Ivory Coast, and Sierra Leone on the western coast of Africa, there’s plenty to see and do! Let’s learn some fun facts about Liberia.

Liberia was founded by The American Society for Colonisation of Free People of Color of the United States in 1821, making it the oldest republic on the African Continent. Founded by and for freed slaves working to build a better future for themselves, the very name Liberia is derived from the Latin word ‘liber’, meaning ‘free’.

Surfers love Liberia, which boasts 580 kilometers (360 miles) of stunning coastline. Its beaches, including Silver Beach at the edge of Liberia’s capital city Monrovia, are some of the Republic’s greatest attractions – making Liberia one of the hottest surfing destinations in the world.

The rapidly developing local surfing community knows that Momba Beach, Fisherman Beach, and Robertsport are just a few of the best surf spots along the almost pristine coast.

The red and white are meant to symbolize moral excellence and courage, while the single white star on a blue square in the top left corner represents both the first independent African republic, as well as the African continent. 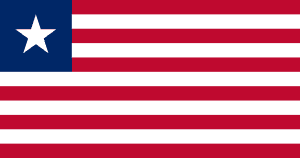 Roughly 700 species of bird call Liberia their home. Liberia might just be a birdwatcher’s dream as many of these birds stay here all year round. An eagle-eyed ornithologist would have the pleasure of viewing dozens of types of birds from flamingoes to swallows, geese, owls, and over 20 varieties of flycatchers!

Almost all Liberians eat rice at least once a day. In fact, rice is such a staple food in Liberia that many people believe that unless they’ve had rice for at least one meal in their day, they have not in fact eaten at all, even if they have consumed other foodstuffs including fruits and bread!

Rice dishes are usually served with a sauce-like soup which normally is made up of animal protein, such as chicken or fish.

Liberia’s Ellen Johnson Sirleaf was the first-ever female president of an African nation. Known as Africa’s Iron Lady, she was the 24th president of Liberia and held office between 2006 and 2018.

Among her most notable accomplishments, she created the Truth and Reconciliation Committee in order to address corruption and ethnic tensions. She was also the recipient of the Nobel Peace Prize in 2011 for her work in women’s rights.

7. It’s home to the endangered and tiny.

The miniature cousins of the common hippopotamus are rare and sadly endangered due to loss of habitat, poaching, and war. The pygmy hippopotamus, or ‘water cow’, as it’s known to the local people, is native to Liberia.

Although there are as few as 3,000 pygmy hippos left in the wild, there have been serious efforts to grow the numbers of the captive population.

The capital city Monrovia is named after the fifth president of the USA, James Monroe, who famously supported the American Colonization Society – establishing the colony in Liberia.

Along with Washington DC, Monrovia is only one of two capital cities in the world named after an American president.

The terrain in Liberia is as diverse as it comes. With hills and low mountains as well as flatter land towards the coastline, it has some truly stunning vistas.

Liberia’s only national park – the Sapo National – is where you find some of West Africa’s last primary rainforest. Made lush by the equatorial climate the rainforest, it’s home to a huge variety of flora and fauna, including the pygmy hippopotamus, chimpanzees, and elephants. 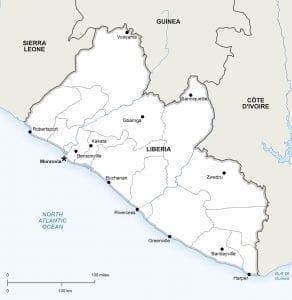 Due to its maritime laws, Liberia claims the second-largest commercial ship fleet in the world (Panama takes the top spot). Roughly one in ten of the world’s ships are registered in Liberia and fly its flag – a practice known as the flag of convenience.

What is the population of Liberia?

What currency is used in Liberia?

What languages are spoken in Liberia?

English is the official language of Liberia, but there are over 15 ethnic groups and over 25 languages spoken throughout the country.

Do you know any fun facts about Liberia?  Share them in the comments below!

This page was last modified on June 7, 2022. Suggest an edit