The Kremlin is one of Russia’s most iconic locations, a place that elicits so much curiosity from people that have only glimpsed it from afar. Here are some interesting facts about this UNESCO World Heritage Site:

1. It’s been around for almost a millennium.

The Kremlin was founded by Yuri Dolgorukiy, the Prince of Suzdal in the 1100s.

2. It built up massively over the years.

In the beginning, the Kremlin was just a wooden building erected on the bank of the Moskva River. Over time, it grew into larger settlements with additional suburbs and fortifications.

3. It became a stronghold very quickly.

By the 13th Century, the Kremlin had become the country’s residence of temporal and spiritual power. 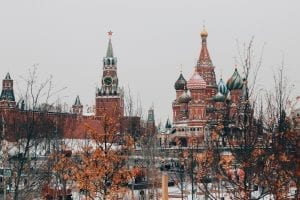 By the 15th Century, the Kremlin was one of Europe’s most impressive fortifications. Walls and towers built between 1485 and 1516 are still around today.

The Polish took control of the Kremlin in 1610. Their hold ended in 1612. This period was called the ‘Time of Troubles’.

6. It eventually became a religious site in the 1700s.

The Kremlin lost its political relevance, becoming a hub for religious functions when St. Petersburg became the capital of Russia in the early 18th Century.

The Kremlin fell into enemy hands once more in 1812 following Napoleon’s invasion of Russia. When he left Moscow a little over a month later, Napoleon ordered the destruction of the Kremlin. The explosions decimated several wall towers but the rain ultimately saved the Kremlin from further destruction.

Vladimir Lenin turned the Kremlin Senate into his residence when the Soviet government abandoned Petrograd for Moscow in 1918. The Kremlin was still the Soviet Government’s seat of power when the Soviet Union ultimately collapsed in the 1990s.

9. The Kremlin’s been on the UNESCO list for over 30 years.

The Kremlin and Red Square got their UNESCO World Heritage Site status in 1990.

The Kremlin wall is an irregular triangular shape that encloses 68 acres of land.

Depending on the terrain, the height of the wall tends to fall somewhere between 5 and 19 meters. The thickness ranges from 3.5 meters to 6.5 meters.

12. There are plenty of sites of worship inside.

There are 4 cathedrals and 5 palaces within the Kremlin. 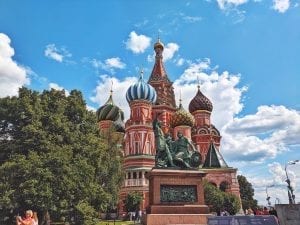 13. Some of the cathedral works combine the best of Europe’s creativity.

The Cathedral of the Dormition, which has five domes, was built by Aristotele Fiorvanti, an Italian architect. It eventually became the major Russian Orthodox Church, a place that hosted coronations and weddings for Russia’s nobles. The cathedral holds the works of the country’s greatest icon painters, including Theophanes the Greek.

14. One of its bell towers was a record holder.

The ‘Ivan The Great’ Bell Tower (81 meters) was once the tallest building in Old Moscow. At that time, no one was allowed to construct a building in Moscow that was taller than the Bell Tower. It was eventually surpassed by the Cathedral of Christ the Saviour (1883). Today, it is simply the Kremlin’s tallest structure.

15. There’s still a record holder in The Kremlin, mind.

The Tsar Bell, which sits on a pedestal next to the Great Bell Tower, has the honor of being the largest bell in the world even though it has never been suspended or rung.

16. Has anyone ever fired the Tsar Cannon?

The Tsar Cannon is in a similar boat. Massive and cast in bronze by a Russian master caster (Andrey Chokhov) in 1586, there is evidence suggesting that the cannon might have been fired at least once. But for the moment, it is mostly symbolic. 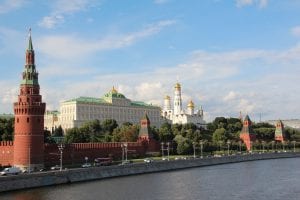 17. There’s an impressive palace inside.

18. Stalin tried to erase tsarist emblems at The Kremlin.

When Joseph Stalin moved to the Kremlin, he replaced the Golden Eagles on the towers with the shining Kremlin Stars, in an effort to wipe away the signs of the Tsarist regime.

Each star is made of rubies and it weighs a ton.

19. Putin had The Kremlin modernised.

Vladimir Putin had a helipad constructed in the Kremlin in 2013 so that he could carry out his commutes without causing the disruptions that are normally associated with presidential motorcades.

The Kremlin is Europe’s largest and most active fortress.

There are actually 20 Kremlins in Russia. The word ‘Kremlin’ means castle or Russian Citadel. 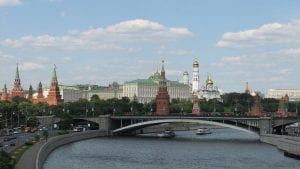 FAQs about The Kremlin

Does the Russian President live in The Kremlin?

Technically, the sitting President of Russia has a residence in the Senate building, which you’ll find inside The Kremlin.

Are you allowed to enter The Kremlin?

You can legally visit and tour some of The Kremlin - but only during set hours of day, and only specific cathedral grounds.

Can you take photos of The Kremlin?

Yes, but you may need to seek official permission - especially if you are taking photos to make money.

Do you know any fun facts about the Kremlin? Share them in the comments below!