Looking to boost your knowledge of the world? Make a start with these fun facts about The Azores!

1. Where are the Azores?

The Azores is an archipelago and overseas territory of Portugal, in the Mid-Atlantic Ocean.

Its nearest neighbors are Portugal to the east, and Morocco, Tenerife and Western Sahara to the southeast.

Fancy exploring the stunning coastline and beautiful mountains of Azores? Head for the coordinates of 37.7411° N, 25.6756° W!

The terrain of the 9 volcanic islands is hilly and mountainous. 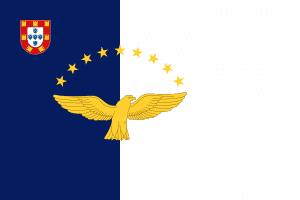 Flag of the Azores

4. The area is pretty big, on the whole.

The total land area of the Azores is 906 square miles (2,346 square kilometers)…that’s around 4 times the size of the Isle of Man.

5. There’s plenty of people who call the archipelago home, too!

6. What’s the capital of the Azores?

8. Humans brought animals to the islands.

Before humans settled on the islands, there were no land mammals, however Azores is now home to mice, rats, hedgehogs, rabbits and weasels.

9. Look beyond the land for more critters!

It’s possible to spot whales, dolphins, turtles and flying fish from the coastline in Azores! 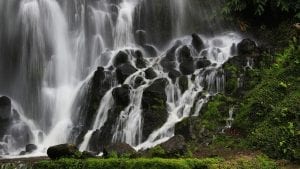 10. What do people speak here?

The official language of Azores is Portuguese.

12. Save those European pennies… 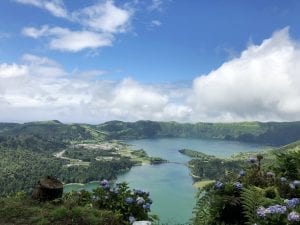 15. Here are some local, delectable delights. 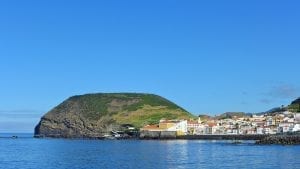 16. The industry and exports here are impressive.

Its industry consists of tourism, food processing, lumber and electricity.

FAQs about The Azores

Is it safe to visit the Azores?

On the whole, the Azores are safe to visit - however, as always, keep your personal belongings safe!

Is it expensive to visit the Azores?

On the whole, you’ll likely expect to pay more to visit the Azores than Portugal itself. However, it’s still possible to enjoy the region for under $100 per day!

Can you swim in the Azores?

Yes, there are plenty of lovely spots to swim in around the islands - there are rock pools, beaches and more!

Do you know any fun facts about the Azores? Share them in the comments below!