Djibouti is a relatively small African nation, found nestled between Eritrea and Somalia. In fact, it’s the third-smallest country on the whole of the continent! In this guide, we’ll take you through a few fun facts about Djibouti that might just surprise you further. Read on!

Only Swaziland and Gambia are smaller than Djibouti when it comes to African nation sizes. However, at 8,958 square miles (or more than 23,000 square kilometers), the nation still covers plenty of ground!

Lake Assal in Djibouti is recognized as being one of the saltiest bodies of water on the planet. In fact, it’s only outmatched by Don Juan Pond, found in Antarctica! Lake Assal receives much of its water from the area’s variety of hot springs. Despite the saltiness, people still receive carefully desalinated water from the Assal that’s fit for drinking!

Lake Assal holds a further accolade for being impressively low – it’s actually below sea level by at least 155 meters! This makes it the world’s third-lowest point, too. 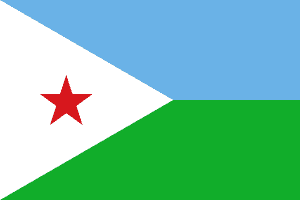 4. What do people speak in Djibouti?

The people of Djibouti speak various languages, but you’ll normally find that French and Arabic are the two most commonly used tongues. In fact, French is widely used in print media as well as in law. That said, you’ll also find that Arabic holds a lot of religious significance in the country.

The Djibouti Francolin is an exclusive avian to the nation! This is a sadly critically endangered bird which frequents the forest areas towards the mountains. It’s gray and brown and is loosely related to the pheasant. It’s thought that weather is to blame for tragically killing more than 70% of these birds over the years, with as few as 200 specimens remaining in the wild.

Whale sharks make a point of visiting Djibouti’s coast and the Gulf of Tadjoura – why not try and swim with a few? This impressive basin is well-known for its exceptional wild coral and a huge variety of fish. As you’d expect, it’s extremely popular with scuba divers and marine wildlife fans!

Djibouti sits on a point of Earth that’s fairly crusty! In fact, it sits on what’s known as the Afar Triple Junction. This refers to a point where three different crust plates are actively drifting apart.

Djibouti has a national animal! It’s the elk – which local people may refer to as the wapiti. The elk here are the largest deer on the planet – and there are thought to be more than 60,000 specimens living in the wild right now.

9. Many people call the city home.

Djibouti City is truly packed – there are more than 600,000 people who call the capital home. That’s more than three-quarters of the country’s population! More than 865,000 people live in Djibouti, total – and the capital is a rarity in that it’s so densely populated without actually being a city-state. 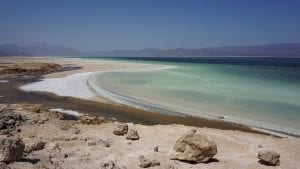 10. Soccer is a big deal in Djibouti.

The people of Djibouti adore soccer! While it’s considered the national sport, the country’s national side has never successfully qualified for the FIFA World Cup – or any other grand-scale international tournament. The side has also, regrettably, pulled out of many Africa Cup of Nations tournaments due to financial concern.

What is the main religion of Djibouti?

Most people in Djibouti follow Islam, as virtually the whole populace is Sunni Muslim. However, Islam practices here are said to be less restrictive than in other practicing nations.

How can I get to Djibouti?

Djibouti has its own international airport, and you can get connections via chartered flight and rail, too. Some of the rail routes are absolutely stunning!

Is Djibouti safe to visit?

Djibouti is relatively safe to visit, though it is subject to violent crime occasionally. Visitors are advised to be wary of natural disasters such as Earth tremors, too. 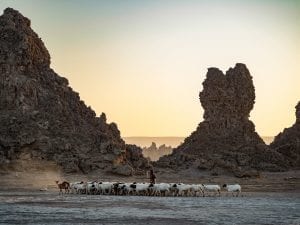 Do you know any fun facts about Djibouti? Share them in the comments below!