Day of the Dead is not Mexico’s form of Halloween, contrary to what is often portrayed in popular culture. Although they have similarities and fall around the same time of the year, they each have their unique traditions and separate origins.

The holiday dates back over 2,000 years and has a rich and long history behind it. The religious practices of the Aztecs are where most of the traditions of the holiday come from today.

In Mexico, the holiday is more popular than Christmas, with many public events and intimate celebrations taking place. Some families in Mexico spend as much as two months’ income on decorations and food on this holiday! 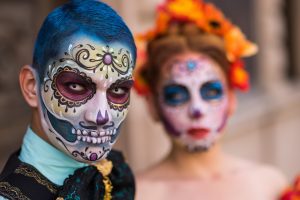 4. Tombstones are always attended to.

Cleaning of the graves is one of the crucial functions of the holiday.

Cempazuchitl are the official flowers of the Day of the Dead. They are used to decorate graves and altars in massive quantities. It is known as Mexican Merigolds in English.

6. What about famous skeletons?

La Catrina is the most famous skeleton of all the skulls and skeletons found.

7. It’s not a set celebration.

The practices of Day of the Dead can differ from region to region as not every place celebrates the holiday the same. For example, a tradition of a town called Pomuch is to remove the bones of one’s ancestors from tombs and “dust” or “wash” them by hand.

8. It’s inspired quite a few movies.

The famous holiday has even made it to Hollywood! It was a key influence behind the movies “Nightmare Before Christmas” and “Corpse Bride”.

9. It has UNESCO status!

The Day of the Dead is not only a national holiday in Mexico, but it has also been recognised by UNESCO as a Cultural Heritage of Humanity. 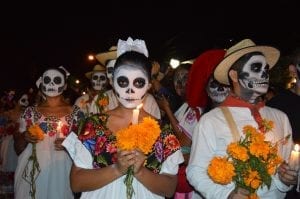 10. It’s all about honoring those who have passed on.

Spending a night inside a graveyard, sitting next to the grave of dead family members, telling stories and listening to music are all part of the celebration.

11. The cuisine is eclectic!

Like any special holiday, food plays a vital role in the Day of the Dead. Tamales and atole are some of the traditional meals, but people look most forward to the desserts.

Mexico City had never held a Day of the Dead parade before the now infamous James Bond scene filmed for Spectre, in which Daniel Craig casually strolls through the procession dressed in full Day of the Dead costume. 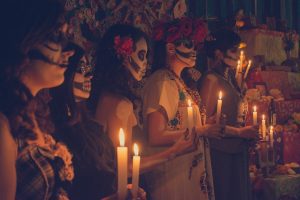 FAQs about the Day of The Dead

Why is Day of The Dead Celebrated?

Dia de los Muertos is celebrated as an alternative to sadness and mourning - instead celebrating the lives of those who have passed with color and happiness!

What is the flower of the dead?

Flowers play a big part in Dia de los Muertos - however, you will normally find that marigolds are frequently used in the celebrations.

What happens on Day of The Dead?

On Dia de los Muertos, people will get together and wear bright costumes, makeup, and will make offerings - as well as dance and generally have a good time!

Do you know any interesting or fun facts about the Day of the Dead?  Share them in the comments below!