Tourists from all over the world travel to Italy specifically to visit the Amalfi Coast. Although many travel to relish the wide variety of treasures the coast has to offer, few people know about its glorious history.

Here’s a few fun facts about the Amalfi Coast so that the next time you visit this beautiful land, you can truly appreciate its beauty.

The lemon trees are one of the most distinguishing features of the Amalfi region, as the production is abundant along the coast. Called the Stusato d’ Amalfi, they are large, aromatic fruits which are vital in preventing seasickness for sailors taking long trips. The whole lemon can be eaten!

2. There’s an interesting monastery out here.

Named the Capuchin Convent, the monastery – turned hotel – is perched upon one of the cliffs of Amalfi. It is believed that monks that resided there added warm milk to their coffee, which created what we know as Cappuccino.

3. It’s the center of the ceramics boom.

Ceramics is one of the most ancient forms of art, and the Amalfi coast was popular for its major centers in the production of ceramics. 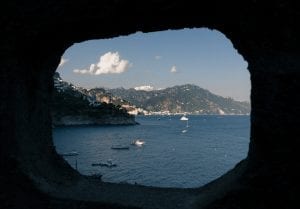 4. It was a highly religious area.

There are numerous churches located throughout Amalfi, with one of the most noticeable and enormous one located in the center of the city. Many of the churches that were built on cliff sides have now been converted to shops and hotels. To show off their status, most nobles’ families built a church of their own in the early history of Amalfi.

5. Sorento was a stronghold.

The ancient Romans and Greeks built defensive walls around the city of Sorento. Over hundreds of years these walls became taller and taller creating spectacular views towards the picturesque island of Capri.

If you keep a sharp lookout, you’ll spot several locations in Sorento with miniature figurines.

7. The roads around Amalfi are truly ancient.

The roads that were built to the towns of Amalfi Coast took 150 years to build and is estimated to be around 750 years old!

In the recent popular film ‘Wonder Woman’, a fine garden of the Mediterranean, located in the Amalfi Coast, was featured.

9. It’s big with celebrities, too!

It is one of the most popular honeymoon spots for Hollywood couples. Some high profile people that have spent an evening or two there include Kim Kardashian, Mark Zuckerburg and Jamie Oliver. 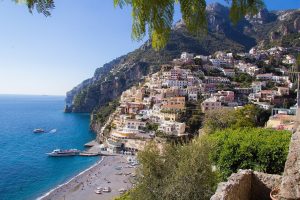 Tuna that are caught in the Amalfi Coast is sold to Japan for their sushi, while the anchovies are sent all around the world.

11. The gods had a hand in the Amalfi Coast.

It is believed that Poseidon, the Greek god of the sea, founded the town of Positano. The town has numerous buildings with shallow rooftop domes. They are also filled with cafes and art galleries. 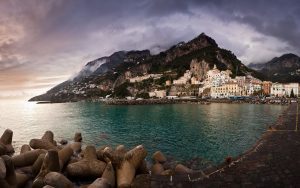 FAQs about the Amalfi Coast

When is best to visit the Amalfi Coast?

Generally, the best times of year to visit the Amalfi Coast are in milder months such as May or September.

Can you swim in the Amalfi Coast?

On the whole, yes - but check ahead before you do!

Does Amalfi have sharks?

Yes! In fact, you may spot some barracudas. However, you are more likely to see turtles.

Do you know any fun facts about the Amalfi Coast?  Share them in the comments below!

Are you considering a trip to the Amalfi Coast? There’s plenty to see!  Check out these interesting facts about Mount Vesuvius for starters!