Apollo is one of the most important gods of Greek mythology, known for his youthful, beardless and athletic figure. Here are some interesting facts about Apollo, the mythological Greek god.

The son of Leto and Zeus, Apollo was born on the island known as Delos.

Apollo has a twin sister named Artemis. She is the goddess of hunting and animals (and therefore is often depicted with a bow and arrow). She was also one of the three virgin goddesses. A hunter named Orion became best friends with Artemis, and they would often hunt together. Apollo was worried she would not uphold her promise to remain pure and tricked Artemis into killing Orion. 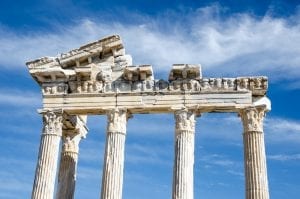 The Temple of Apollo

He was known for serving as an intermediary between men and gods.

Was Apollo a god of music? He was certainly a skillful musician and was known for playing tunes on his golden lyre for Olympus. Although Apollo is credited for the invention of his lyre, which is a stringed instrument that resembles a harp, it was made by Hermes.

Phoebus is Apollo’s forename, which means ‘pure’ or ‘bright’, connecting him to the Titan Phoebe, his grandmother.

He was granted the gift of prophecy and oracles due to his integrity and truthfulness.

8.    Apollo squared off against Hercules.

An oracle named Delphi denied Hercules a prophecy, and he was furious. However, Apollo came in to defend the priestess.

He played a major part in the Trojan war and is one of the only ancient Greek gods to help Trojans. Apollo helped Troy, while other deities helped the Greek soldiers. This was because a young Trojan woman was abducted by one of the Greek leaders and taken as his own. However, the father of this woman was a priest to Apollo. Apollo was furious at the Greeks for this and helped Hector and Trojans fight against the Greek armies. 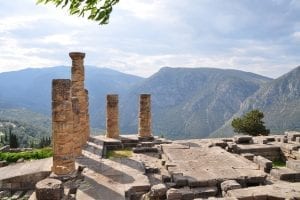 The Temple of Apollo, Greece

Apollo had two sons that were well – known. Orpheus was his most notable son, and he was believed to be able to play the lyre better than his dad Apollo himself. While Orpheus was gifted with music by Apollo, his other son, Asclepius, was gifted with the power of healing and medicine.

Apollo is believed to have had many love affairs with both mortals and goddesses. One of the most famous mortals was a woman named Hecuba, who was married to the king of Troy. Troilus was the son born after the union between Apollo and Hecuba. Cassandra was another mortal whom Apollo had confessed to, but his affections were rejected. Apollo, therefore, punished her by arranging it so that her prophesies would not be believed. 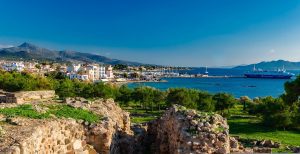 The Temple of Apollo Ruins

Animals that were sacred to him were the dolphin and swan. Apollo’s tree, the laurel, was used as a status symbol in Greece.

14. Apollo was known for his remarkable feats.

Apollo is believed to have killed Python, a serpent in a contest. It is said that it was conquered with a single arrow.

No one’s too sure - some believe that the God Apollo is still alive and kicking!

What is Apollo’s weakness?

All Gods have weaknesses, and Apollo’s happened to be women - he was a sucker for love!

Was Apollo the ugliest God?

Hardly! That accolade seems to belong to Hephaestus - who is cruelly referred to as being ugly despite being born deformed.

Do you know any interesting facts about the Greek God Apollo?  Share them in the comments below!

Are you fascinated with Greek mythology? Check out these fantastic facts about the Greek Gods…