Basking sharks are enormous, though they aren’t exactly the huge, toothy creatures you’d imagine them to be. In fact, while they do have plenty of teeth, they don’t actually use them to eat, if at all. They have huge, gaping mouths, which they use to scoop up and swallow prey. They are known as filter feeders.

Here are some more amazing facts about these tremendous critters of the deep!

Believe it or not, despite being some of the biggest sharks you’ll find in the deep, they are generally safe to dive and swim around. This means that – while they can look pretty mean – they are unlikely to pull a ‘Jaws’ on you any time soon! They are similar to whale sharks in this respect and are therefore very popular marine life to swim around and dive with.

2. However, don’t underestimate their size.

The fins of the basking shark are truly massive. They are said to be able to grow up to 2m each. This likely helps to go towards their incredible weight – the biggest basking sharks can grow up to 6,000kg, generally!

3. They are pretty chilly creatures.

You’ll likely find basking sharks in some of the milder seas around the world, though they do appreciate colder waters. They are sometimes referred to as sub-polar creatures. 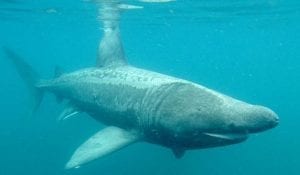 Sadly, basking sharks have, over the years, been sought for various resources. They have been widely hunted by humans over the years not only for food, but also for their oil, and their huge fins.

5. They’re some of the ‘nicest’ sharks in the ocean.

On the whole, basking sharks are seen as the gentle giants of the shark world. This is because they filter their prey and tend to swallow up smaller creatures as they go. As such, they are not known to hunt down and seize upon their prey like other sharks and marine life. This also goes to help them gain a reputation for being some of the friendliest sharks on the planet.

6. Hunting has rendered them protected.

Sadly, basking sharks are endangered. As a result of their hunting – as stated above – they are seen as vulnerable. They are even protected in the US, as well as over on the Gulf Coast of the US. The more we understand and appreciate about these wonderful creatures, the more action we can – and should – take to protect them.

7. A quarter of a whole basking shark is its liver.

The basking shark has a truly enormous liver! Believe it or not, the general basking shark liver makes up around 25% of its total body weight. However, it has a rather small brain to body ratio – though that doesn’t make these animals stupid!

Basking sharks are still something of a mystery to a large extent. While we know how they feed – again, to some extent – the exact reasons and motives behind their behaviors, as well as the way they mate, are still being studied.

It’s thought that the basking shark gets its name because they tend to bask in the sun a lot while feeding. In fact, researchers and experts believe that they tend to gravitate towards warmer climes all year round, evidentially so thanks to the fact that they don’t surface or even go near the top of the water in the winter. 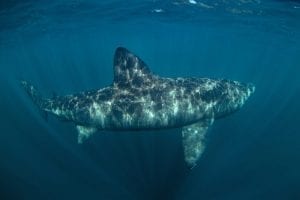 Despite the fact that basking sharks are amazingly docile, they have also helped to build towards several urban legends over the years. This is partly thanks to the fact that they are so massive, as well as the fact that they do still look rather fearsome! It’s thought to have helped given weight to the legend of the Stronsay Beast, for example. However – we’re not sure you’ll find a Basking Shark in Loch Ness to explain the local Nessie legends!

11. How do you keep something like a basking shark on the water?

How does something so massive stay buoyant? The basking shark’s body is rich in squalene, which helps it to float around.

Despite their somewhat fearsome appearance and size, basking sharks are pretty harmful to humans - they won’t attack swimmers or scuba divers.

Where are basking sharks found?

Basking sharks are all over the planet, generally in chilly climates, and even around the UK!

Why do basking sharks keep their mouths open?

This is how they hunt - they simply swim along and suck in plankton who dare to get in their way! They are very passive hunters, like vacuum cleaners of the deep!

Do you know any fun facts about basking sharks? Share them in the comments below!

This page was last modified on September 6, 2021. Suggest an edit