Beijing is one of the most famous cities in the east, known for its incredible history, friendly people, and stunning views! As the capital of China, it’s one of the busiest metropolises on the planet. But how much do you actually know about it? Here are some fun facts about Beijing worth remembering.

1. It’s one of the oldest cities in the world.

Beijing is considered one of the oldest cities in the world! This is due to the fact that we can retrace its history as far back as about 3,000 years! It is thought to be even older than London, which is about 1,975 years old.

Before being finally named Beijing, the city actually went through a few name changes! It has been named Jicheng, Nanjing, Dadu, Yanjing, Beiping, Zhongdu, and Peking. We think that Beijing suits it best – what do you reckon?

3. Beijing cares about its flowers.

Beijing actually has two official flowers! These are the Chinese rose and the chrysanthemum. Both flowers can be frequently seen throughout the city and mean a lot to the people – they’re cultural symbols all on their own. 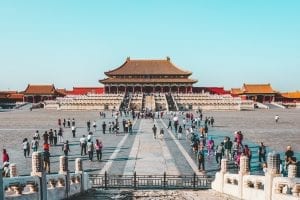 4. What languages are spoken in Beijing?

One of Beijing’s most famous sites is the Forbidden City. It was the imperial palace for Ming and Qing dynasty emperors (of which there were 24 in total). It took 14 years to build and was home to the emperors from 1368 to 1911!

Beijing is also the second largest city in China, right behind Shanghai. This may seem strange as Beijing is the capital of China! However, there are still over 21 million people living in Beijing as of 2018.

When it comes to the weather, Beijing doesn’t do things by half! The temperatures in Beijing can dip well below freezing but can reach heights of up to over 86º F! It’s definitely the kind of city where you would need your winter clothes as well as your summer clothes, just in case!

Beijing Capital International Airport is the second busiest airport in the world! The airport is so big; it has its own fire department! So, if you ever travel there, you might need a map to get by! 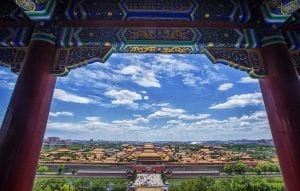 10. It was once the biggest city in the world… for a long time.

Beijing has also set plenty of size records over the years. For example, it’s said to have been the biggest city on the planet between 1400 and 1700!

What is Beijing best known for?

Beijing is known for its incredible landscapes, stunning architecture, and fantastic cuisine! The Peking duck is one of the most famous dishes from this city, and with good reason! More recently, Beijing has become known for being the first city to host the Summer and Winter Olympic Games.

Why is it called Beijing?

The name “Beijing” arose in 1403, during the Ming dynasty. The name means “Northern Capital”.

How do you say “hello” in Beijing?

If you ever visit Beijing, it’s important to know how to greet the people! The easiest way of saying “hello” is by saying “Ni hao”. It is pronounced, “nee how”.

Do you know any fun facts about Beijing? Share them in the comments below!

This page was last modified on January 10, 2023. Suggest an edit