Looking to increase your knowledge of Europe and better your chances of winning the next pub quiz? Then check out these 14 fun facts about Berlin…

Berlin is the capital city of Germany. Wondering how to say the name of this wonderful city? It’s pronounced Ber-linn.

The total land area of Berlin is 344 square miles (891 square kilometers) – that’s just over half the size of Greater London.

3. It’s not actually that dense. 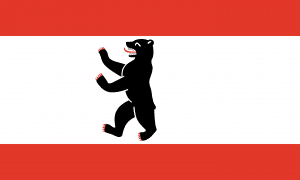 4. Berlin is quite a way above the sea.

Residents of Berlin are known as Berliners.

Berliners enjoy a maritime temperate climate with warm summers, cool winters and an average annual temperature of just 9.7°C, although temperatures have soared as high as 38.1°C here!

7. Heat tends to rise in the city.

Did you know that thanks to Berlin’s buildings holding onto heat from the Sun, temperatures in the city can be up to 4°C higher than the surrounding areas!

Potsdamer Platz in Berlin was the first place in Germany to have a traffic light installed!

9. Where is Berlin on the map? 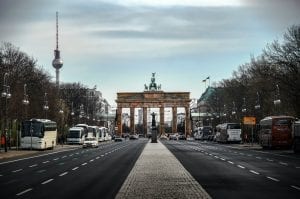 10. The Berlin Wall is magnificent

Make sure you visit the Berlin Wall if you’re in Berlin; no trip to Berlin would be complete without seeing the infamous wall. Whilst the Berlin Wall once separated east and west Berlin, what remains now serves as a renowned tourist attraction and showcases amazing artwork by local graffiti artists.

11. It’s the bridge capital of Europe.

Berlin boasts around 1650 bridges – a lot more than Venice which only contains a mere 409!

The official language of Berlin is… German of course! 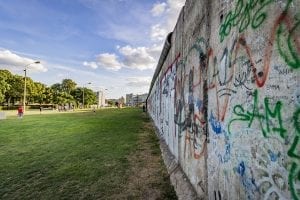 13. Make sure to leave the Deutschmarks behind.

Germany welcomed 33 million tourists into the country in 2014, many of whom visited Berlin for its significant cultural history and extensive nightlife scene.

What are some of the most famous buildings in Berlin?

Berlin’s most famous buildings and attractions include the Brandenburg Gate, the Holocaust Memorial and the Berlin Wall.

What makes Berlin so special?

Berlin is historically and scientifically important - it’s not only home to the Reichstag Building and the Brandenburg Gate, but scores of research institutes.

What are some famous foods you can enjoy in Berlin?

Some of the most popular cuisines in Berlin include wiener schnitzel, currywurst, kartoffelpuffer and apfelstrudel.

Do you know any fun facts about Berlin?  Share them in the comments below!