Big Ben Tower is one of the UK’s most recognizable landmarks.  When you think of London, you likely think of the clock tower that stands proudly next to the Houses of Parliament!

However, while the tower has been a staple of the London skyline for hundreds of years, it is still a fairly mysterious structure!  There is actually more to the tower than we give it credit.  Here are 13 fun facts about Big Ben, the bell, the clock and the history.

Big Ben isn’t the name of the clock, or the tower – it’s the name of the famous bell inside the structure. The clock tower itself is actually known as Elizabeth Tower, earning its name during the Queen’s 2012 Jubilee.

2. The bell had a very different name, initially.

The bell’s original name was going to be Royal Victoria – but the nickname stuck! It’s thought to come from Sir Benjamin Hall, whose name is found on the bell itself. 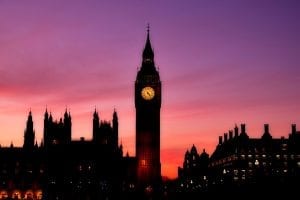 The clock is said to be accurate at all times, but it’s actually suffered a couple of hiccups over the years. This is mainly down to weather, such as through extreme heat and deep freezes.  In fact, a cold snap once caused the bell to chime late!

In fact, the clock is famously accurate within a second – though again, various issues may have offset this over the years!

5. The tower is truly massive.

The tower itself stands a staggering 315 feet tall (96 meters).

The construction of Elizabeth Tower faced a few delays but was eventually completed in 1859.

Big Ben has in fact been silent since summer 2017. This is due to ongoing construction work, which is due to complete soon.  In fact, the bell is thought to begin its chimes once again from 2021 onwards.

Big Ben hasn’t been silent before then since 2007, which, again, was for maintenance and repair reasons.

8. There’s a smaller version of the tower elsewhere in London.

Big Ben has a little brother in Little Ben, a replica of the tower found elsewhere in the city. It’s around 20 feet or 6 meters tall, which means it’s still a towering structure in its own right!

9. Big Ben at your convenience!

The renovations at the tower will, believe it or not, bring toilet facilities to Big Ben for the very first time. 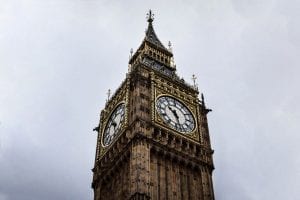 10. There are specific tones to the bell chiming.

The main bell chimes at a tone of E, while there are also smaller, quarter bells in the tower. These chime at E, B, F-Sharp and G-Sharp.

There are 11 different floors leading up the tower.

12. Ever wondered about the size of the faces?

13. The structure weathered the wars.

Big Ben and Elizabeth Tower are two of many London landmarks that survived bombings during the World Wars.

Big Ben and its clock are powered by a gravity escapement - no digital trickery here!

Some of the building surrounding the clock tower were damaged during WWII bombing - but it was repaired and brought back to former glory!

How long did it take to build Big Ben?

Do you know any fun facts about Big Ben?  Share them in the comments below!

Are you fascinated with London?  Check out these fun facts about The London Eye…