It’s safe to say that the Second World War effort in Britain saw everyone pull together – and one of the most fascinating locations for incredible teamwork and innovation was Bletchley Park. It was here that some of the most talented mathematicians worked day and night to crack codes intercepted through enemy forces – and were it not for the incredible work of the genius Alan Turing, things may have turned out a lot differently.

It’s well worth celebrating the efforts of the brave men and women who once worked here – check out these fun facts about Bletchley Park!

1. Where is Bletchley Park?

Bletchley Park is situated in Milton Keynes, in the county of Buckinghamshire, England.

It is now a heritage site due to its fame as being the home of Government employed personnel engaged as ‘Code Breakers’ during World War II.

The Mansion House of Bletchley Park was built in 1883 and is surrounded by landscaped gardens and some woodland.

The house was constructed in the Gothic and Tudor style.

3. It’s had a few different purposes.

After the war, Bletchley Park became a Management Training Facility for the Post Office. 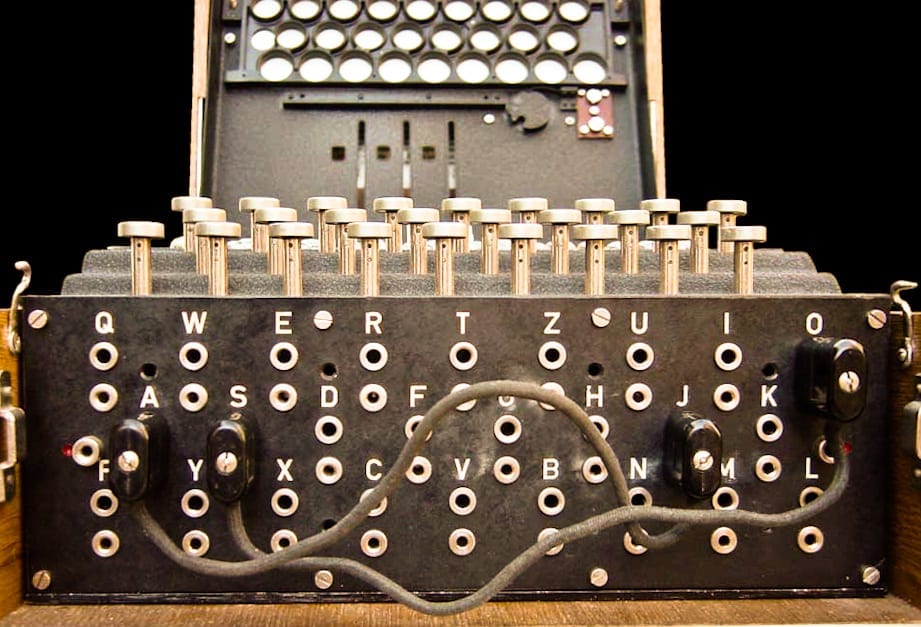 Plugboard of an Enigma machine. During World War II, ten plugboard connections were made.

4. It was the code-busting capital.

During the war, bespoke machinery was designed and built to aid decryption of the codes vital to provide information for military tactical planning.

The work of the team at Bletchley Park led to the development of Colossus – the name given to the world’s first electronic digital programmable computer. We owe Colossus an awful lot – you wouldn’t be reading this fact file without its work, for example!

Government war operations at Bletchley Park remained ‘classified’ until 1970. This means you’re now freely able to pore through and enjoy some of the most fascinating secrets of the period!

The National Museum of Computing is now housed at Bletchley Park in a separate building. A model of the Colossus is exhibited there.

A model of the ‘Bombe’ is also on display. This iconic computer was designed by Alan Turing and refined by Gordon Welshman, who were employed as ‘code breakers’ at Bletchley Park.

211 ‘Bombe’ decoder machines were in use by the end of the Second World War. They were a huge support in helping to turn the tide against Nazi Germany. 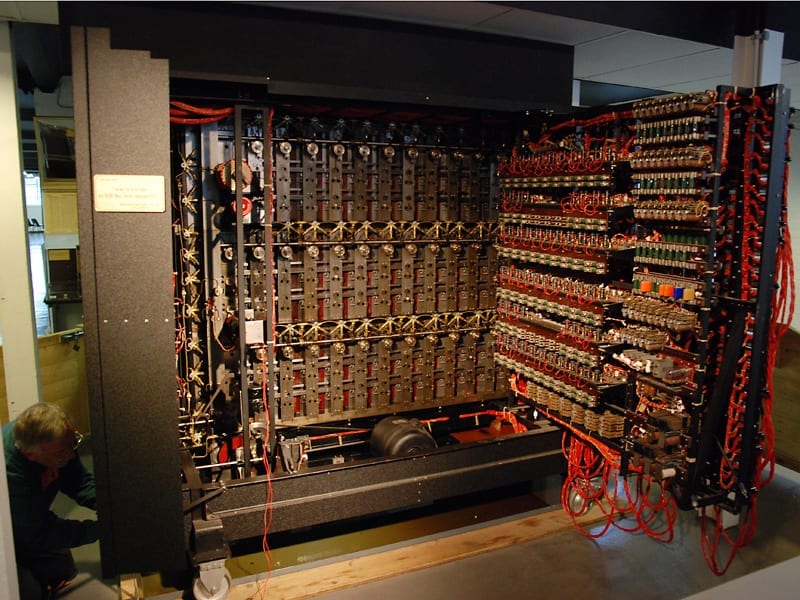 10. They cracked the Enigma code.

On January 20th, 1940, the German method of sending coded messages, a system called the ‘Enigma’ code, was successfully broken at Bletchley Park. This is an achievement widely regarded as one of the biggest non-battle successes of World War II.

The team working on Enigma were under the supervision of Dilly Knox, and included Alan Turing, Peter Twinn and John Jeffries.

11. Enigma was one of many successes.

De-coders at Bletchley Park are credited with ‘breaking’ the codes of several countries, who were using them for hostile war purposes. Namely, codes cracked here belonged to Germany, Italy, and Japan.

Thousands of messages passed through decryption at Bletchley Park. Some were false – and all needed verification of authenticity.

The decoding and detailed study of information derived from coded messages means Bletchley Park is credited with shortening the Second World War by at least two years.

It’s also credited with saving many lives as well as preventing many serious injuries. 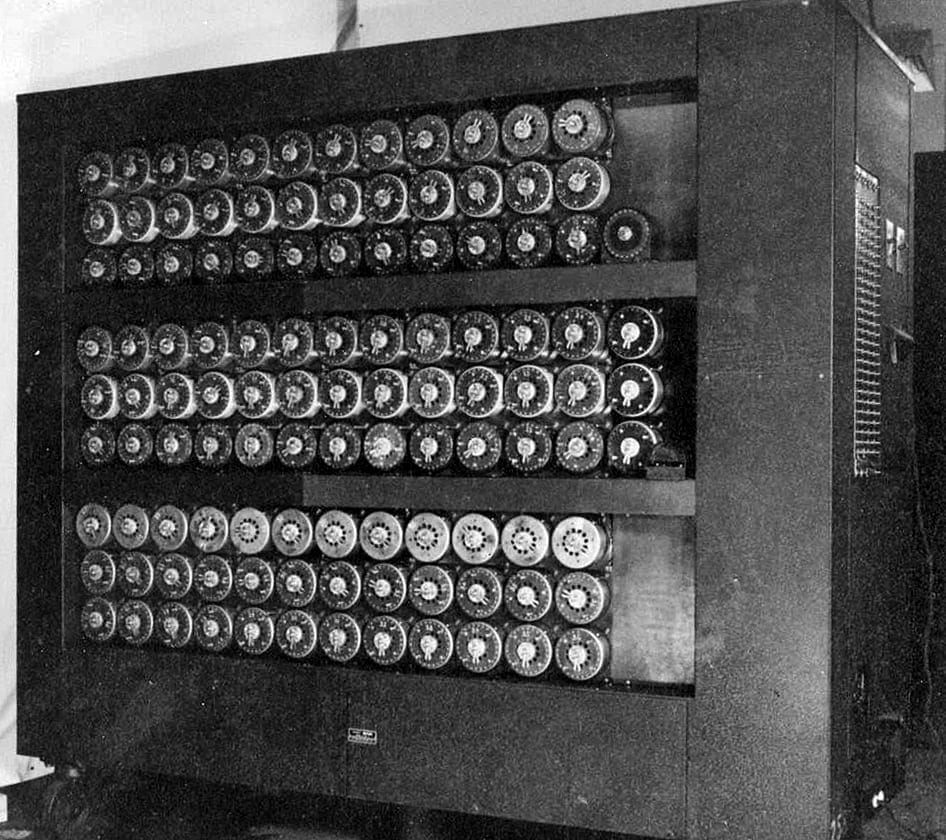 13. There have been all kinds of plans for the land.

Bletchley Park Mansion and Huts on the land, which formed part of the accommodation used during the war effort, were due to be demolished. Initially, the local council decided that the unkempt Mansion and decaying huts should be replaced by a supermarket and shops.

The decision to remove Bletchley Park buildings to make way for development was halted when the Post Office agreed the land be sold. Peter Wescombe, Founding Member of the Bletchley Park Trust, used an £8 million grant from the Heritage Fund to update the site for it to become a Museum and Visitor Centre.

In 2013, having been hidden for 73 years, some workmen found papers stuffed into a box in the roof of one of the huts.

Some of these documents remain in fragments, but they are proof of methods used to break codes. One such precious document displayed is titled the ‘Blist’. It is dated April 14th, 1940.

The National Radio Centre is housed at Bletchley Park. The NRC exhibits documents and articles tracing the history or radio communication.

The NRC is somewhat unusual in that it is open seven days per week,52 weeks per year with the exception of Bank Holidays. 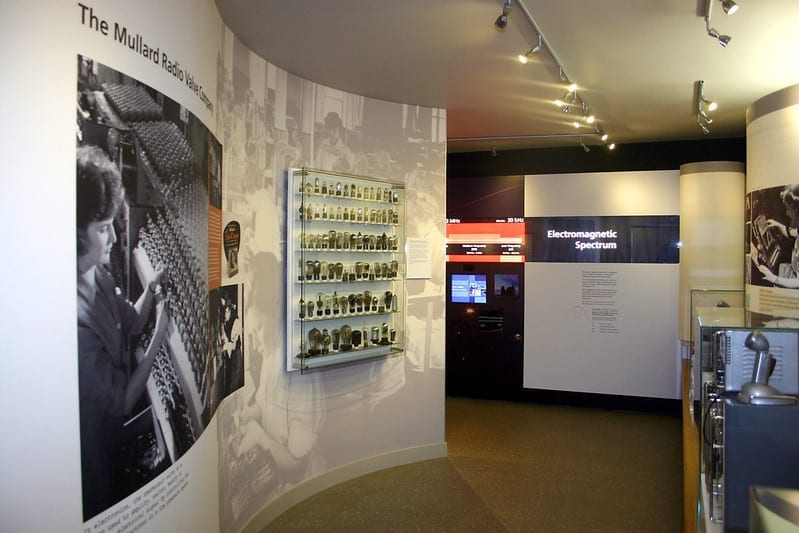 16. The computing museum is a great day out.

The National Museum of Computing opened in 2007 to collect, restore and exhibit computers and material relevant to the codebreaking history of the location.

The National Museum of Computing receives no public funding – it relies entirely on donations!

17. You might have seen Bletchley Park on the big screen.

Bletchley Park has featured in many films, TV shows and series. For example, ‘The Bletchley Circle’ is one of the most famous adaptations of the work that went on here. 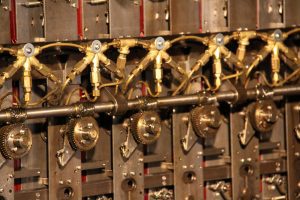 18. The teams that worked here are honored.

Bletchley Park holds a ‘Roll of Honor’. This catalogs the names of people who, at Bletchley Park and elsewhere, were involved with signals intelligence. Over 13,000 names and ranks are listed here!

19. It has royal connections.

Kate Middleton, Duchess of Cambridge, famously visited Bletchley Park. She revealed that her Great Grandmother and Great Aunt, who were twins, had worked there as Duty Officers during the Second World War.

How much is an adult ticket into Bletchley Park?

At the time of writing, it will cost around $28 - $30 for an adult to tour the Bletchley Park site and museum.

In the sense that it’s still around - yes! However, it’s open to the public as a historic monument, now.

When were the secrets of Bletchley Park revealed?

Documents from decades past have since been declassified, but secrets behind Bletchley Park first emerging in the 1990s.

Do you know any interesting or fun facts about Bletchley Park? Share them in the comments below!