Brisbane, the city with a laid-back charm is also known as a cosmopolitan hub for arts, culture, and dining. It’s an urban metropolis with a relaxed vibe. Life in Brisbane revolves around the outdoors.As the capital of Australia’s Sunshine State, Brisbane invites its visitors to grab their mates and enjoy the food, art, and adventure on offer.

Before you accept the invite, here are 23 fun facts about Brisbane that you probably weren’t aware of…

1. Where is the Brisbane Spike?

The traditional owners of the land, the Turrbal people, called the area of Brisbane City “Meanjin”, which means ‘place shaped like a spike’. This ‘spike’ in the river is now where the Brisbane CBD is located.

2. Who is Brisbane named after?

The name ‘Brisbane’ was drawn from the river, named after Sir Thomas Brisbane, the Governor of New South Wales from 1821 to 1825.

3. The botanic gardens here have a world first.

Brisbane City Botanic Gardens is home to the world’s first cultivated Macadamia nut tree, which still stands today. It was planted in 1858 by Walter Hill, the first curator of the botanical gardens. 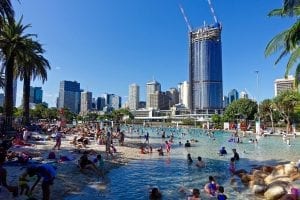 4. Electricity debuted down under here.

The first recorded use of electricity for public purposes in Australia took place in Brisbane in 1882. Eight arc lights were lit up along Queen Street, with power supplied by a generator driven by a small engine in a foundry at Adelaide Street.

The ghost of the original owner of Brisbane’s most famous Breakfast Creek Hotel is said to haunt the establishment, with some staff reportedly seeing and hearing him regularly, according to the Breakfast Creek website.

The hotel was built in 1889 by the former lord mayor of Brisbane William MacNaughton Galloway, whose initials grace the front facade. He died in 1895 after a drunken fall from a second-floor window of the hotel and reportedly his ghost now haunts the original parts of the hotel.

The City Ambulance Transport Brigade kicked off in September 1892 and was given a room in the Brisbane Courier building. It transported its first patient from a Taringa residence to a private hospital in New Farm on November 5, 1892.

7. Some treats are made by accident!

Brisbane was the location where Lamingtons were accidentally created. It’s alleged that in 1901 the chef working in Brisbane’s Government House accidentally dropped the Governor’s favourite sponge cake into some melted chocolate. It was then dipped in coconut to avoid messy chocolate fingers. Years later this dish remains a national delicacy.

In 1928 a Brisbane born man by the name of Sir Charles Kingsford Smith left California for a solo plane ride back home. Flying via Hawaii and Fiji, Sir Charles landed after a staggering 83 hours and 38 minutes of flight time.

Reaching a height of 92 meters, the Brisbane City Hall clock tower makes the hall the largest in the country. Built between 1920 and 1930 the tower has an observation platform stopping at 76 meters, where people can get a top look at the city surrounding. 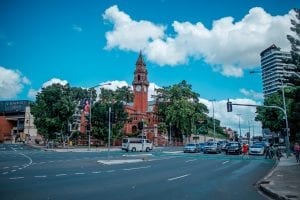 10. The down under space race started here!

Brisbane was home to Australia’s first rocket launch, albeit a failed attempt. Queensland Air Mail Society president and founder Alan H. Young, with an ambition to modernise the postal service, dispatched a rocket filled with empty envelopes from a ship called the Canonbar from the Brisbane River in 1934.

11. There was once an amazing zoo here.

A zoo existed in the Brisbane City Botanic Gardens up until 1958 and housed a range of animals including monkeys, baboons, deer, antelope, foxes, and kangaroos. More than 400 bird species were also on display within several aviaries, however, the biggest drawcard was a giant Galapagos Islands tortoise called Harriet, reportedly captured by Charles Darwin in the 1830s.

12. Who stumbles upon a river?

He recommended the area for settlement due to its plentiful fish, good soil, and thriving pine trees. Initially, the settlement was established on Moreton Bay but later the settlement moved to an area we now know as the Brisbane CBD. 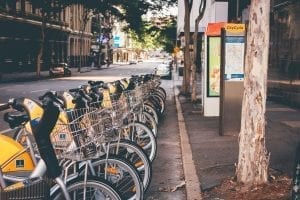 As Brisbane developed and the city became more established, the streets in the CBD were named after British royalty.

14. Story Bridge is a record breaker.

Brisbane’s Story Bridge is the longest steel cantilever bridge in Australia and was named after public servant John Douglas Story who advocated strongly for the bridge’s construction.

Story Bridge in Brisbane was influenced by its Montreal counterpart, the Jacques Cartier Bridge. 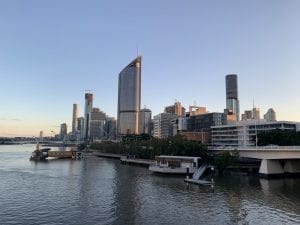 15. Brisbane was a submarine hotspot.

During World War 2 Brisbane became the busiest submarine port in the world.

Brisbane has an underground opera circuit.

The Underground Opera Company has converted the heritage-listed Hill Reservoirs into an intimate performance space with a capacity of 120.

Brisbane is known for its scenic beauty, balmy climate, and friendly atmosphere. 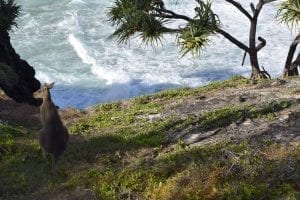 19. It’s the place to go for seaside exploring.

Brisbane is the jumping-off point for the Gold and Sunshine Coasts.

Eating and drinking in Brisbane is all about open-air experiences and many places have massive windows opening onto leafy streets with tables and chairs spilling on sidewalks. 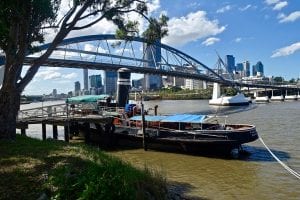 21. Queen Street has a dark history.

The thought of Queen Street brings with it thoughts of shopping, spending, and eating but it wasn’t always that way it was quite a dark area back in the day.

The corner of Queen and Albert Streets was once home to up to 1000 convicts. Between the years of 1827 and 1830, a multi-story convict barracks was constructed on to hold the inmates.

22. Travelling around Brisbane is easy.

Getting around Brisbane is cheap and easy, good food, including fantastic seafood, is abundant, and accommodation is affordable, especially in some of the city’s comfortable, elegant B&Bs. 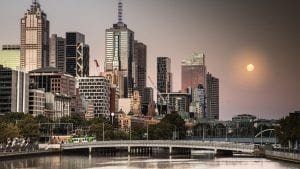 What is Brisbane famous for?

Brisbane is famous for its animal sanctuaries, art galleries and botanic gardens.

When is the best time to visit Brisbane?

Brisbane tends to offer amazing sunshine and temperatures in the Australian autumn, which is the British spring.

Does it rain much in Brisbane?

It rains a lot during the summer - even when the temperatures are still high!

Do you know any fun facts about Brisbane? Share them in the comments below!