What do England, Yale University, University of Georgia and the U.S. Marines have in common? Well of course, the English bulldog: their symbol and mascot! Why the bulldog? Obviously for his strong character and determination!

Initially bred to fight, the British bulldog is among the oldest breeds native to the UK. It’s considered a national treasure. The bulldog’s role changed over time and today it’s a popular choice of family pet and companions due to its charming and loving nature. This pup really deserves a moment of our time, so to show some love we’ve prepared 25 fun facts about British Bulldogs as a token of our respect!

1. The bulldog’s named after a British legend.

Being Great Britain’s National dog, the British bulldog is known worldwide as a tough and constant reminder of the legendary John Bull.

2. Bulldogs ‘debuted’ in shows in the 19th century.

The English bulldogs first appeared in the show ring in 1860.

3. They’re lovable in a unique way!

Two of the traits that make the breed so endearing to owners and why they are among the most popular breeds in the UK are on one side their comical character and on the other their extreme dignity. 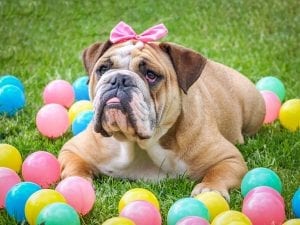 4. They were bred for a brutal sport.

In the 12th century, the sport of bull-baiting was introduced to the British Isles by the Normans. Bull-baiting was a public sport in the U.K. from 1206 up until its banning in 1835.

Bulldogs were specially bred for a fierce encounter creeping low to the ground and attempting to bite the bull’s, bear’s, or horse’s nose.

5. Mastiffs used to do the fighting.

For centuries the sport became popular with all classes of people throughout the land. At the time, they used mastiff-type dogs for the fights. Then, smaller, thicker-set dogs with very mighty jaws and strong heads started to replace the leggier and taller mastiff-type dogs.

These shorter, mighty dogs were to become the ancestors of the English bulldogs we see today.

When bull-baiting was outlawed as a sport, the future of Bulldogs became uncertain.

Luckily, some were kept as companions becoming the foundation and regeneration of English bulldogs.

7. Bulldogs found new jobs in the future US.

The original Old English bulldog was saved from vanishing by emigrants who took their dogs to the New World where they were used to round up wild bulls so they could be safely restricted in areas away from towns.

Bill George and other enthusiasts continued to promote the breed by developing and improving them. How? By crossing Old English bulldogs with Pugs.

The result was a friendlier and less aggressive character suitable for a loyal companion and a great family pet.

9. Bulldogs became ‘official’ shortly ahead of the 20th century.

The breed was recognized by the Kennel Club in the late 1800s. 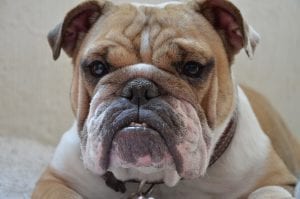 English bulldogs are as popular in other countries of the world as they are in their native UK.

What are their other distinguished features? Their wide shoulders, overhanging skin, a nose rope, and wrinkled face.

12. Bulldogs are pretty easy to look after, most of the time.

British bulldogs acclimate well to apartment life and are even great for new pet parents.

British bulldogs are fairly low-maintenance pups. Keep them out of extreme weather, and give them enough exercise. 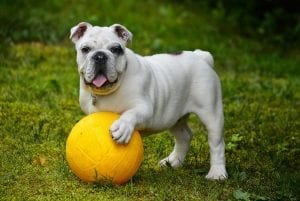 13. They’ve come a long way from their ancestors.

Today the Bulldog only vaguely resembles its ancestors in appearance.

Despite his still vicious appearance, you can’t find a dog with a sweeter, more loving disposition.

British bulldogs can be stubborn and lazy. Even though your Bulldog may not be very excited about going to a walk, it’s important that he is exercised every day to keep him fit.

Heat and humidity can’t be tolerated by the British bulldog.

When the weather is warm and everyone is outside some people put small pools filled with water in a shaded spot for their Bulldogs to lie in. 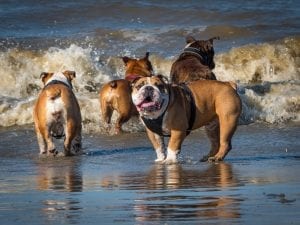 16. They are true homebodies, too.

Being house dogs they should not live outdoors all of the time. Bulldogs are sensitive to cold weather.

17. Their noses night be cute, but they have some problems.

Bulldogs wheeze, snort, and snore – and are prone to sleep apnea.

Their short noses also make them predisposed to many respiratory ailments. The ones that have pinched nostrils may require surgery so they’ll be able to breathe easily.

Bulldogs can experience flatulence. If excessive you should consult your vet!

Bulldogs gain weight easily, being greedy eaters. So if you don’t monitor their food intake they can quickly become obese. 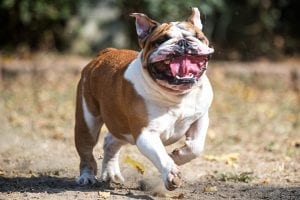 Bulldogs have difficulty giving birth because of the size of their heads and fronts.

Most British bulldogs require caesareans to deliver their puppies.

To get a healthy pet find a trustworthy breeder who tests breeding dogs for genetic health conditions and good temperaments.

The British bulldog is usually docile and gentle but can be jealously territorial. They do not care to share their home comforts with other species. 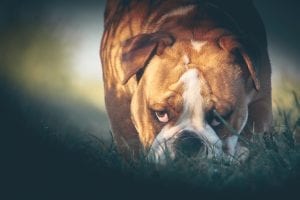 22. You can start training a bulldog around two months after birth.

Training and kind discipline should begin at eight weeks as with all animals.

23. Bulldogs do well with families.

The British bulldog scores well as a family pet and it will repay you with many years of devotion in return for your care and companionship.

24. They are surprisingly clean.

A British bulldog with its smooth coat is generally a clean animal. 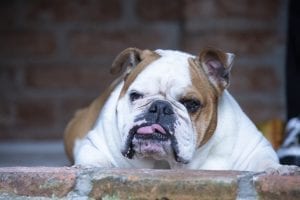 25. However, they will need some TLC.

The folds on its face should be cleaned daily by drying them out with cotton wool, rubbing on petroleum jelly, and wiping it out to create a fence against tear stains and to prevent chafing.

The area beneath the root of the tail requires the same attention. And a little smeared over the nose on a daily basis prevents it from becoming crusty.

Toe-nails should be inspected weekly to ensure they have not become too long.

To keep your dog looking and feeling in great condition you should brush it daily for five minutes, and then wipe it over with a damp flannel.

No - not normally! Like most dogs, they have a limit, however - they can be territorial.

Do bulldogs have a deep bite?

Bulldogs have very powerful jaws, so yes - if you were ever on the other end of a bulldog bite, it would likely hurt a lot!

Are bulldogs easy to train?

Bulldogs are notoriously lazy! Therefore, you might find them a bit tricky to motivate - take your time!

Do you know any fun facts about British Bulldogs? Share them in the comments below!