Buckingham Palace is well-known as the official London residence of Her Majesty, Queen Elizabeth. Apart from being a popular tourist attraction, the Palace and its grounds serve as an official royal residence, an administrative centre, and an important location for hosting ceremonies and handling political affairs in the UK.

Before you buy your sightseeing bus tour tickets and hop off at stop 19 on the yellow route, we’ve prepared 36 fun facts about Buckingham Palace that might come in handy…

1. John Sheffield, The Duke of Buckingham, was the original owner.

Hence the name! It became an official residence for sitting monarchs 76 years after King George III bought it, on the accession of Queen Victoria.

There are a staggering 775 different rooms in the Palace, including 19 Staterooms, 52 Royal and guest bedrooms, 188 staff bedrooms, almost 100 offices, and 78 different bathrooms, too.

At last count, there are over 1,500 of them in Buckingham Palace. 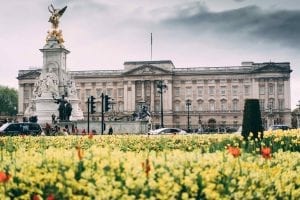 5. The ballroom is the largest room.

At 36.6 meters long, 18 meters wide, and 13.5 meters high, the ballroom earns the award for the largest room at this fascinating palace.

The 1856 celebration of the end of the Crimean War was the first event ever held in the Palace’s magnificent ballroom and was attended by Queen Victoria and Prince Albert.

These ceremonies take place in the Royal Ballroom, including the famous ceremony where distinguished British citizens are awarded knighthoods.

8. Woodrow Wilson was the first US President to visit Buckingham Palace.

Therefore, American heads of state have only been visiting the British Royal Family for around 100 years.

The Palace uses a ‘flag signal’ to show when the Queen is in residence, if they are at home, the ‘Royal Standard’ flies atop the Palace and when she’s not around, the Union Jack flies, instead. 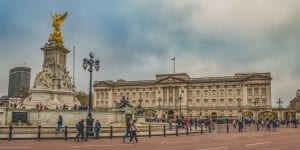 10. The architect was sacked.

John Nash, responsible for the Palace’s current look chose to exceed budgets, and the officials fired him outright.

The Palace is built on top of a series of intricate, secret tunnels.  In fact, at one stage, a man was found to be living there by George VI.

It is not just the Queen and Prince Philip’s home it’s also the London domicile of Prince Edward and his wife Sophie of Wessex, as well as Prince Andrew, the Duke of York. 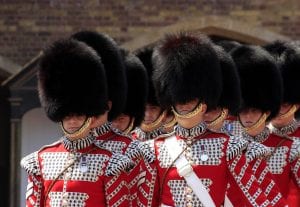 The Palace managed to survive up to nine separate bombing raids during the Second World War.

The Palace boasts many modern facilities including a full cinema, a Coutts cash machine, and even a Post Office and police station. 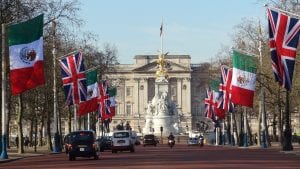 16. The Palace garden has a private lake.

In fact, the Palace boasts of many different features and facilities, like a private lake as well as a full-size tennis court.

This interesting tradition was started by Queen Victoria in 1851 when a reigning monarch appeared on the balcony for the first time to greet the public.

Some of the most famous events when the balcony was used to greet the crowds are King George V’s appearance on the eve of World War I, or more recently, Kate Middleton and Prince William’s post-wedding kiss.

19. The Palace really is TRUELY MASSIVE.

It resides in the very heart of London, surrounded by the lavish St. James and Green Park.

Built as the Buckingham House in 1703, the palace was originally constructed by English Gentleman and architect William Winde as a large townhouse for Duke Buckingham. 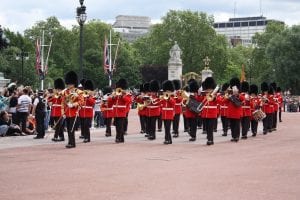 The house earned its title The Queen’s House in 1761 when King George III bought the property as a private residence for Queen Charlotte.

In 1837, Buckingham Palace became the London residence of one of Britain’s most renowned and longest-reigning monarchs, Queen Victoria. 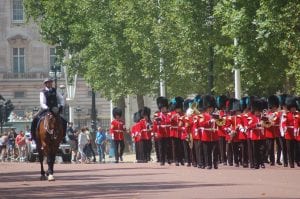 The Palace isn’t privately owned by The Queen, in fact, it’s held in trust by the Crown Estate.

Despite the Netflix series “The Crown” placing many scenes within Buckingham Palace, the real palace was never used by the cast. 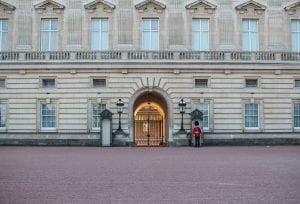 From late July to late September, the amazing Buckingham palace’s State Rooms are open to the public.

When the palace is open to the public, the stateroom tour can take around 2-2.5 hours, giving tourists plenty of time to take in the palace’s beauty.

The Changing of the Guard ceremony occurs just outside of Buckingham Palace at 10:45 each day and lasts around 45 minutes. The real handover between guards occurs at 11 a.m. 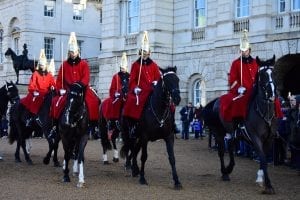 Military bands accompany the guards at the ceremony playing play both traditional military music and a mix of popular music.

There’s even a clockmaker employed by the palace who maintains over 350 clocks and watches. 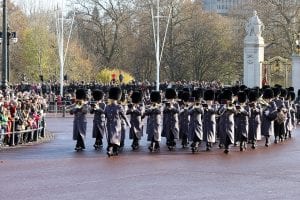 The Changing of the Guard

In 2002, over 1 million people from all over the world attended The Queen’s Golden Jubilee.

Edward VII remains the only monarch to both be born and pass away at Buckingham Palace.

Each year, more than 50,000 guests are invited to the Palace. During Queen Elizabeth’s reign, over 1.1 million people have attended her famous garden parties.

Which is larger, Buckingham Palace or The White House?

What does it cost to visit Buckingham Palace?

At the time of writing (Winter 2021), it costs adults around $23 to visit and tour the palace.

Is there a dress code to visit Buckingham Palace?

No - the tours here are very accommodating!

Do you know any fun facts about Buckingham Palace?  Share them in the comments below!

Do you like learning about British stately homes? Check out these interesting facts about Blenheim Palace