Chameleons are some of the strangest-looking, most fascinating beasts in the animal kingdom. Not only are they well-known for their incredible oscillating eyes and their long tongues, many people will know that they have the amazing ability to be able to change color!

But what else do you know about chameleons? Let’s take a look at a few more fun facts to help clue you up.

1. Chameleons come in many flavors!

Believe it or not, there are more than a few species of chameleon out there. In fact, scientists believe there to be around 160 different types at present!

2. They mainly live on a solitary island.

You’ll likely find around half of them as being native to the secluded island of Madagascar, off the coast of Southern Africa. You’ll also find the critters roaming around the African mainland, as well as in Southern Europe.

In fact, there have been movements to bring chameleons to North America, meaning that you can actually find chameleons in some Southern states, as well as Hawaii.

3. How do they change color?

Chameleons, of course, are famous for changing color. This happens because their cells have pigment-shifting abilities. This means that they can open and close cells often to change from green to brown and back again. 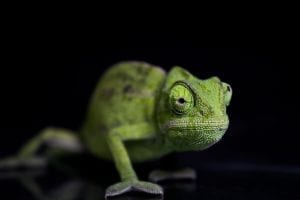 4. Is the big fact about chameleons actually wrong?

The fact that they change colors and tones to match their surroundings may actually be a myth. Some scientists and researchers actually believe that they can change color and shade for all kinds of reasons. For example, a chameleon might change color depending on its mood, its health, or even the temperature in the environment.

5. Their tongues are impressive.

Chameleons have impressively long tongues. These will spring out of their mouths at lightning-quick pace to catch prey such as bugs and insects. The average chameleon tongue is thought to be up to twice the length of its body, which means the critter can catch prey from stunning distances away.

Chameleons will thrive in warm to hot environments. That’s likely why they love Madagascar so much! You will also find them in desert regions, meaning that they can withstand incredible levels of heat.

7. They have a few favorite foods.

Chameleons have varied diets, though they will generally snack on crickets and other insects. However, it’s not unheard of for larger chameleons to eat small birds and occasional clutches of fruit!

8. Their lifespans can vary.

Sadly, chameleons don’t tend to live too long – between two to ten years in captivity. However, it’s thought that they can actually live for longer in the wild!

9. Their eyes are truly amazing.

Of course, we need to talk about those amazing eyes! A chameleon’s eyes can swivel around on arcs at 180 degrees, which means they can actually rotate and analyze their surroundings in full 360 degree panoramas.

Thanks to their incredible eyesight, chameleons are able to spy and spot potential prey from up to 10m, or 32 feet away! That makes them formidable foes to tangle with! 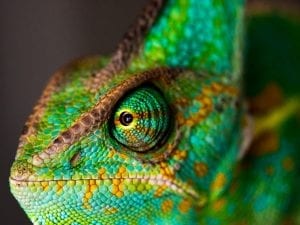 10. Chameleon sizes have no bounds!

Chameleons will differ hugely in terms of size. There is no average length of bulk for this critter! Some may grow to be as large as 27 inches long, while others are tiny – at less than an inch in length!

They can be great fun to look at, but they are quite needy - not for beginners!

That all depends on the individual personality! Some are quite tetchy - but don’t worry, a chameleon bite isn’t dangerous.

It’s actually thought that chameleons are seen as omens for bad luck - and sadly, many people kill them as a result.

Do you know any fun facts about chameleons?  Share them in the comments below!