Champers, bubbly, fizz – call it what you like, champagne remains one of the most lucrative and luxurious drinks available. Of course, the heart of the champagne industry resides in France, though a taste for the fizzy stuff has really travelled far and wide.

Champagne is immensely pressurized to keep in the bubbles. In fact, it’s thought that there is around three times as much pressure in an average bottle of bubbly than in the tyres on your car. No wonder you have to stand back to open champagne – watch that cork!

In fact, a champagne cork’s speed has, of course, been calculated. It’s thought that if allowed to reach maximum velocity, a cork will pop out of a bottle at around 64 km per hour.

3. It’s named after its birthplace.

Champagne is a sparkling wine, which is actually named after the region in France where its grapes are harvested and where the traditional bottles are made. The father of champagne, Dom Perignon, has a bottle named after him – it is by far one of the most expensive! 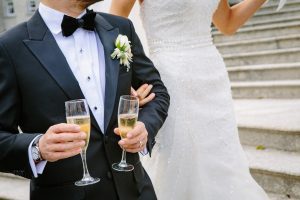 4. Champagne’s inventor was a holy man.

Perignon was, believe it or not, a monk! He actually came up with champagne completely by accident. He was fighting to keep his monastery’s wine free from bubbles, fearing they would spoil the experience. However, once he actually tried the bubbling wine, he realized he was onto something incredible.

It’s thought that more than 15,000 people work to cultivate champagne’s unique grape combinations, meaning it’s an industry that is hardly slowing down. These grapes include the Pinot Menier, Pinot Noir and Chardonnay.

In fact, only 2% of champagne is made from grapes other than Chardonnay. It is this slight, yet important 2% which really makes the difference – ask any champagne connoisseur!

Yes, someone has gone to the effort of counting how many bubbles an average bottle of champagne possesses. Gerard Liger-Belair, who took on a champagne-based PhD, advises that the more gas bubbles there are, the better the drink tastes. There are plenty who agree with him, though they probably haven’t counted the bubbles!

7. Take this one with a pinch of salt…

Some studies suggest that champagne, in moderation, is good for you. Believe it or not, it’s thought to have a positive effect on preserving memories!

Most people know that movie spy James Bond loves his Martinis (shaken not stirred) – however, he’s actually thought to be more of a champagne drinker. That said, in recent years, he’s been seen to prefer the odd pint of Heineken. Rather his liver than ours!

9. Beer is much fizzier than champagne.

Champagne is far more carbonated than the average beer, which is famous for fizzing and frothing. In fact, it’s thought to be three times as fizzy, on the whole. 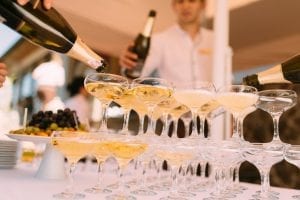 10. Churchill was a champagne fan.

Winston Churchill is said to have enjoyed the odd 11 am glass of champagne – whatever helps you win wars!

In fact, he was said to have enjoyed more than 42,000 bottles on his own during his lifetime!

11. Sometimes the bottle is worth more than the contents!

There is a champagne bottle built-in 18-carat gold, and with a 19-carat Swarovski diamond at the core. This collector’s bottle, the Gout De Diamants, is said to have cost more than $2 million. You’d probably want to sip that one fairly slowly!

12. Ever had a champagne headache?

Champagne headaches are genuine struggles for bubbly lovers. However, there is a technique to avoid giving yourself too much of a brain freeze while enjoying the drink! Crucially, it’s a tipple that you should enjoy slowly, and never gulp down. The quicker you drink champagne; the more bubbles will travel into your blood! 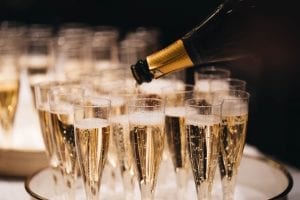 Champagne bottles are built to be extremely strong and robust. In decades and centuries gone by, champagne pressure is thought to have caused bottles to explode without warning. This initially led to champagne makers having to wear facial protection and masks to avoid getting hurt by flying glass! Thankfully, the modern champagne you can store in your cellar these days will have a more robust bottling constitution.

Why is champagne so expensive to buy?

Champagne is often so expensive to buy because there’s a lot of pressure - including in terms of weather - to make this wine work!

Can champagne be good for you?

When is champagne traditionally enjoyed?

Champagne is often enjoyed with meals, though it’s generally a celebratory toast or a welcome drink at events.

Do you know any fun facts about champagne?  Share them in the comments below!