Did you know that you can celebrate New Year twice in the space of 12 months? Chinese New Year takes place around the start of February, and has been celebrated for centuries – and not just in China!

It’s a time for harnessing good luck and encouraging positive energy. Here are some fun facts about Chinese New Year to help prepare you for the festivities ahead.

It varies every year. It can be predicted in advance and always falls between January 21st and February 20th. Dates are lined up in accordance with the Lunar Calendar.

3. Which animals are represented in the Chinese zodiac?

12 animals represent the Chinese zodiac. They include, in sequence, the following: Rat, Ox, Tiger, Rabbit, Dragon, Snake, Horse, Goat, Monkey, Rooster, Dog and Pig. Each year is represented by an animal – for example, 2022 is the Year of the Tiger. 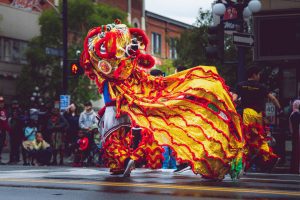 4. In some cases, people make sacrifices at Chinese New Year.

5. Lanterns are hard to avoid this time of year!

Predominantly red, thousands of lanterns line streets, are placed in gardens, adorn buildings and are even set afloat on rivers! Many people also release them into the air to float away!

The Lantern Festival takes place on Chinese New Year’s Eve until the last of the lanterns are hung. Families and friends gather together at the end of the lantern festival and mark this date with a special dinner.

6. Many people appease the Harvest God when New Year arrives.

Traditionally the Harvest God is worshipped in the hope communities will be graced with a lucrative harvest. These days, increasingly, more people dedicate prayers to their ancestors.

8. And, there’s a very good reason for all of this red.

The color red is favored in China to signify vitality, success and good fortune. Many decorations in red are hung in and outside homes. Animal shapes representing the year ahead, or other homemade paper cut out symbols, are also popular and are easy to spot.

9. There are a few things you should and shouldn’t do at Chinese New Year.

Superstitions are adhered to by many Chinese people during the festival. Washing clothes or hair at Chinese New Year signifies washing away good fortune! Taking out garbage from the home is also considered unlucky, potentially removing good luck. 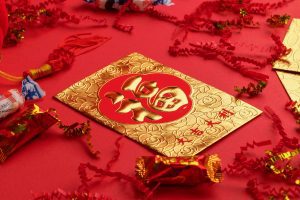 10. Check the color of your hat – and not your reflection!

Mirrors are thought to attract ghosts – and green hats are meant to signify jealousy, so are also avoided. However, tangerines and oranges are frequently exchanged or displayed over the new year period. They are thought to bring success and good luck!

200 million people travel to mainland China just to celebrate the festival. As of spring 2021, the world population was approximately 7.7 billion. A quarter of that number, just under two billion, celebrated Chinese New Year throughout the world!

Why are fireworks so popular at Chinese New Year?

Because 90 percent of the world's fireworks are produced in China! They are always readily available here and superstition suggests they repel evil spirits!

What Chinese animal years can we expect coming up?

Do you know any fun facts about Chinese New Year?  Share them in the comments below!