Christopher Columbus was the world’s most famous explorer, discovering the “New World” and proving that the world was not flat. But did he really achieve all these things?

Find out by reading these 17 true facts about Christopher Columbus and his journeys.

Christopher Columbus lived in the Age of Exploration when European powers wanted the riches of the Far East. It was dangerous and difficult for Europeans to reach Asia by land, so the Portuguese took to the sea; they sailed around the African continent.

Columbus had a novel idea. Instead of following the Portuguese, he proposed sailing West and crossing the Atlantic to reach Asia. But Portugal, England and France dismissed the idea. In fact, Christopher Columbus sought patrons for ten years, until he struck a deal with the Spanish monarchy.

2. He called himself Xpoual de Colon

Christopher Columbus went by many names, including Xpoual de Colon. In Italy, he’s known as Cristoforo Colombo, but in Spain, he went by Cristobal Colon.

3. He got his name from a pirate

Legend has it that he got his name, Columbus, from a famous pirate named Colombo. Some versions of the tale even say that he worked for the pirate in his younger days.

4. The crew he left behind went missing

In January 1493, he left behind 40 of his crew to start a settlement on Hispaniola (present-day Haiti and the Dominican Republic) and went back to Spain. Upon his return to Hispaniola later that year, the settlement was destroyed, and his crew was nowhere to be found. 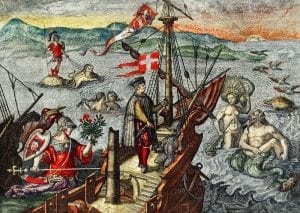 5. Columbus was sent back to Spain in chains

Columbus and his brothers’ rule in Hispaniola was brutal, so much so that the Spanish Crown sent a new governor to replace Christopher Columbus himself. In fact, the native population dwindled from a few hundred thousand to only hundreds because of European diseases and their violent rule. Columbus and his brothers were sent back to Spain in chains. He was eventually cleared of charges and allowed to cross the Atlantic for the last time.

6. He crossed the Atlantic four times

7. He was stranded in Jamaica

When Columbus sailed for the New World for the last time, shipworms gnawed parts of his fleet, forcing him to abandon two ships and land on modern-day Jamaica. He and his crew were stranded, but the native Arawak Indians welcomed them and fed them for months.

As months dragged on, Columbus’ crew mutinied, robbed and murdered some of the Arawaks. To quell the chaos, Columbus pretended to bring down the wrath of God. He had a copy of an astronomical almanac, which predicts a total lunar eclipse. Three days before the celestial event, Columbus requested an audience with the Arawak chief, saying that his God was angry for the lack of provisions for his men and that he would send a sign of his displeasure.

True enough, the moon turned a blood-red color and terrified the natives. The Arawaks asked Columbus to intercede, promising to provide for them if his God restores the moon. Columbus pretended to pray in his cabin and emerged only when the eclipse has subsided. The Arawaks then provided for them until a caravel from Hispaniola arrived to fetch them. 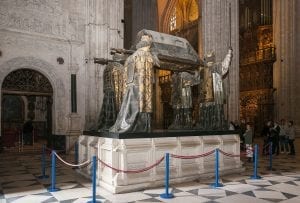 9. Columbus didn’t prove that the Earth was round

Many credit the discovery of a round Earth to Columbus, but he wasn’t the first to prove it. Humans have known that the Earth was round since ancient Greece, so this wasn’t a surprising fact, even for Christopher Columbus. The Greeks observed the movements of the sun and other planetary properties to conclude that the Earth was a sphere.What he wanted to do was to create a sea route across the Atlantic towards Asia.

10. Columbus wasn’t the first to cross the Atlantic

Columbus wasn’t the first to conquer the Atlantic. Half a century before, Vikings led by Leif Eriksson crossed the Atlantic and set foot in North America. As a matter of fact, Columbus didn’t discover America, as it was already populated when he reached it.

11. He miscalculated the Earth’s circumference

It’s a little-known fact that Christopher Columbus had many miscalculations during his journeys. He underestimated the circumference of the Earth by 25%. Also, his estimate of the naval distance to Marco Polo’s great port of Cathay was inaccurate.

12. His famous ships had nicknames

Columbus’ ships are known as Niña, Pinta and Santa Maria, but the first two are likely nicknames. In Columbus’ time, it was custom to name ships after saints and then give them a simpler moniker. The real name of Niña was Santa Clara, while Santa Maria’s nickname was La Gallega, after Galicia, where it was built. Pinta’s real name is unknown. 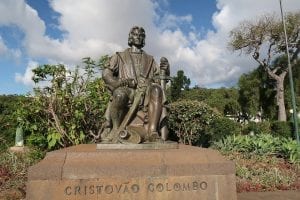 The legacy of Christopher Columbus

Columbus died on 20 May 1506 and buried in Valladolid, Spain. He was then dug up three years later and buried in a family mausoleum in Seville.

14. His daughter-in-law had him exhumed

Columbus wanted to be buried in the New World, but it didn’t have a church large enough to accommodate a person of his status. So in 1542, his daughter-in-law Maria de Rojas y Toledo had him exhumed and sent him to Hispaniola.

In 1795, France took control of Hispaniola. Spanish soldiers then exhumed his body and reburied him in Cuba.

16. His body was exhumed again to be returned to Spain

After the Spanish-American War, Columbus was once again exhumed and returned to Seville, where he lies in a Gothic cathedral.

When Columbus died, his heirs filed lawsuits known as the Pleitos colombinos against the Crown of Castile and Leon to assert the rewards for discovering the New World for Spain. Legal proceedings lasted three decades until the Crown granted honorific titles to Columbus’ grandson.

Did we miss any fascinating fact about Christopher Columbus? Share them in the comments.

And if you want to learn more about the lands that Columbus visited, here are some jolly facts about Jamaica.