Queen Cleopatra is likely to be one of the most famous and most powerful women in all of history. It’s unlikely you will do much reading on ancient Egypt without coming across her name once or twice! Her fascinating story is the stuff of legend – however, Cleopatra certainly existed, and we’ve been able to piece together some fascinating stories about her reign which are continuing to stun even the most avid of historians.

Here’s a stack of interesting facts about Cleopatra which may well astound you – how much do you actually know about the legendary queen of Egypt?

1. Cleopatra’s origins may not be what you think.

Believe it or not, Cleopatra wasn’t actually Egyptian. A foreigner on the throne, no less! History and genealogy seem to suggest that she was of Greek heritage – in fact, Cleo did much of the family tree tracing herself. However, Cleopatra was quick to adapt to Egyptian culture, and made a point of honoring their traditions while reigning.

2. She was known for making herself seen.

Cleopatra was never short of a bit of confidence, and it’s safe to say that she saw herself as a god-like entity. She was known for making grand entrances when she traveled, such as when she dressed as Aphrodite when she first met Marc Antony. This entrance wasn’t without people fanning her while dressed as Cupid, either!

Cleopatra wasn’t a queen of leisure – at least not all the time. She was actually in charge of a naval fleet following her marriage to Marc Antony – in fact, their matrimony caused the need for the fleet in the first place. It is thought that Antony was being slandered by his rival, which led to the Romans eventually declaring war on the queen. Cleopatra wasn’t taking any of it – she led warships into battle herself – though the attacking Octavian overpowered her forces. 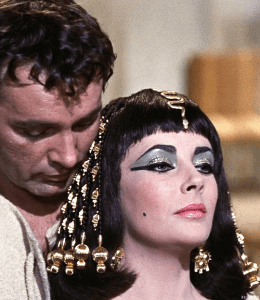 4. She was incredibly sharp.

Cleopatra was fiercely intelligent. She is thought to have been multilingual, being able to speak Egyptian and Greek – of course – but also being fluent in the language of Hebrew, too. It’s also thought that she was a masterful chemist, and wrote several books centering around ancient science.

5. How did she really look?

Cleopatra is widely associated with being beautiful and seductive, however, ancient coins show the queen to have something of a masculine face. Some theorists believe that this may have been a political maneuver to help her appear more powerful. We will never know for sure!

Cleopatra wasn’t actually with us for very long, but she made more than a few marks on history. She actually died at the age of 39, committing suicide – but that’s not to say her life was tragic. In fact, without Cleopatra, history would have turned in a completely different direction, as she effectively ended the age of the pharaohs in Egypt.

7. Our calendars changed forever thanks to Queen Cleopatra.

It’s thanks to Cleopatra, it is thought, that we have the odd phenomenon of leap years. A leap year is where, every four years, we have an extra day on the calendar in February. It was Cleopatra’s astronomer, Sosigenes, who proposed that leap days be brought into effect. Julius Caesar – Roman emperor and famous lover of Cleopatra – adopted such means into the Roman calendar, much of which stands to this day.

8. What led to Cleopatra’s death?

It’s thought that Cleopatra committed suicide as she was determined not to die at anyone else’s hand. In fact, she played a little game with her lover Marc Antony, where she convinced him that she had committed suicide, leading him to do the same – to take his own life. Romeo and Juliet in real life, it would seem!

However, Cleopatra would eventually take her own life when it appeared that she would be taken prisoner in Rome – rather than risk the shame of parading as a capture, she chose to leave our world on her own terms.

9. Her end remains a mystery.

No one is really sure quite what happened in the final few days of Cleopatra and Marc Antony’s lives, with the above being pieced together through the little history we have available, as well as a few assumptions! 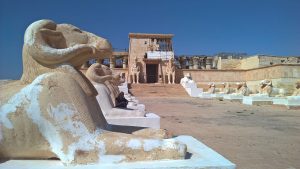 Props from the film: Cleopatra’s Palace

10. However, her reign is one of great legend.

Her reign was one of great triumph – Egypt flourished under Cleopatra, and saw the country become the richest in the region – and was the last of all Mediterranean countries to fall to the Roman Empire.

Did Cleopatra marry her brother?

Yes - as was tradition in ancient Egypt, Cleopatra was betrothed, for a time, to her brother - known as Ptolemy XIII.

Was Cleopatra the very first female pharaoh in Egypt?

It’s thought that someone may have beaten her to this title some two centuries prior - Queen Arsinoe II is believed to have ruled before.

What is the meaning of the name Cleopatra?

The name Cleopatra is said to mean ‘Glory of the Father’.

Do you know any interesting facts about Cleopatra? Share them in the comments below!