Coconut crabs are truly bizarre-looking creatures – is it any wonder that you’re reading this fact file? They are massive beasts and have an interesting communication system – and yet they still remain fairly mysterious. To help boost your knowledge of these animals, here are some fun facts about coconut crabs!

Charles Darwin was impressed on his first encounter with coconut crabs. He described them as ‘monstrous’! On his travels, he encountered many weird and wonderful creatures. On cataloging information about these surprisingly large crabs, their reputation has stuck!

2. They are truly brutish!

They can weigh up to 4kg and measure approximately 1 meter from tip of claw on one leg to the opposing tip on another leg!

3. Were coconut crabs involved in the disappearance of Amelia Earhart?

The body of Amelia Earhart was never found. She was the famous female pioneer of early long-distance flights, who crashed during an epic voyage. In 1937, after Amelia had gone missing whilst flying over the Pacific Ocean, an experiment was devised. The body of a pig was left in the area where she was believed to have landed. As expected, it was taken – and the upshot was the speculation that Amelia had been eaten by coconut crabs! 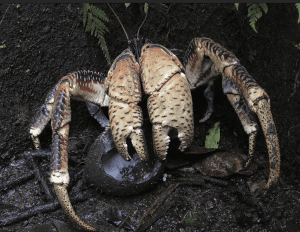 4. You’ll spot coconut crabs from quite a way off…

Coconut crabs have a striking appearance. Not only are they physically armed with impressive claws. They are beautifully colored. Colors range from orange through several shades of red, or blue shades carrying through to hues of purple.

5. The breeding cycle of coconut crabs is fascinating!

Female coconut crabs lay their eggs in water. Their eggs drift and may eventually land on the sea bed in shallows. Carried along with currents, their eggs then develop. Their young offspring find temporary homes in other shells and/or float around until they eventually leave the water to live part of their life on land.

They are ready to swim at birth and are strong swimmers. These crabs can remain underwater for stints up to 30 minutes.

Coconut crabs have remarkable legs and powerful bodies. They can climb trees though often jump down rather than hang onto or cling to tree trunks on the way down! They can be seen to jump down from as high as 15 feet but climb up to beyond 30 feet!

7. They are evolutionary marvels.

The anatomy of coconut crabs shows how well they have adapted to life in the water, on land and how they can move with agility, climb considerable heights and shift heavy weights.

8. In fact, here’s something fishy…

They don’t have gills as fish do, but breathe through lungs!

9. They are natural-born weightlifters.

The strong limbs of coconut crabs enable them to lift up to 27kg in weight! 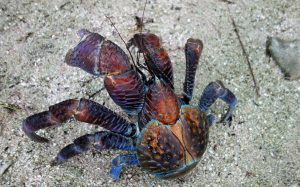 10. They are really built for purpose!

The limbs of coconut crabs have special purposes. Some have sharp tips for gripping, others fine claws to rip out softer tissue from inside nuts, etc, and others simply to pick or hold food.

11. Their sense of smell is amazing, too.

Coconut crabs have long antennae which they use to smell salt in the air directing them towards the ocean. They can also distinguish the small of other coconut crabs, trees and shrubs as well as their prey.

On Christmas Island, coconut crabs are protected. People are dissuaded from capturing them for eating by a fine of $5,500!

Can Coconut crabs be kept as pets?

Coconut crabs can be kept as pets, though many people feel this is unkind. They do require large areas of secure space! Bearing in mind that, in the wild, they roam over considerable distances, climb trees and dig burrows deep in the ground.

What do coconut crabs eat?

In the wild - weirdly enough - coconut crabs eat coconuts! They break the husks and then scoop out the flesh, often first smashing the coconuts by dropping them from a considerable height. They also eat small birds!

Are coconut crabs as fierce as they look?

Coconut crabs are generally mild-mannered unless provoked. Some land owners have recognized the way these crabs can become feisty when defending their territory!

Do you know any fun facts about coconut crabs?  Share them in the comments below!