Corn! You probably think of it as a delicious summer side, or as the source for your popcorn at the cinema. Indeed, if those were the only purposes corn served it would be a glorious staple of the human diet. In actuality though, corn is a bizarrely fascinating resource even beyond its appeal to people seeking tasty snacks and vegetable dishes.

Here are just 10 of the many fun facts that can be found about this one-of-a-kind crop.

1. Corn is in (almost) everything

Back in 2015, The Washington Post wrote an article proclaiming that corn is in almost everything we eat. And it really wasn’t an exaggeration! Or at least, it’s true in America and to some extent the rest of the world. In various, processed forms, corn is used in packaged snacks, breakfast cereal, poultry and fish, restaurant dishes, salad dressing, and soda — not to mention the vast majority of livestock feed!

It’s fairly well known that corn came from the “New World” several centuries ago. What many might not realize now though is that the U.S. still produces a third of the entire supply in the world. If you’re not from America, and you haven’t heard of the state of Iowa, you might appreciate it more than you know. It’s just one of 50 states that produces almost 20% of that massive American crop load.

3. Corn may or may not be a vegetable

You probably think of corn as something specific in your mind: either a grain or a vegetable. Well, your thinking is probably due to where you’re from. Most of the world calls corn a grain, but the U.S. — more or less the modern home of the crop — classifies it as a vegetable. When you think about it, we don’t have too many everyday foods or resources that are defined in different ways by different people. 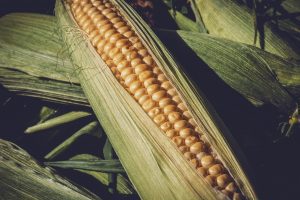 4. Corn can stave off vision problems

As you’re undoubtedly aware, eating fresh grains and vegetables in good measure leads to all sorts of health benefits. Our ‘36 Nutritious Facts About Vegetables’ outlined many of them! One benefit that not even that post touched on though was that of staving off vision problems — which corn in one’s diet can actually do. Certain antioxidants (zeaxanthin and lutein) that are abundant in corn are linked to long-term eye health and decreased likelihood of macular degeneration.

Despite its links to both modern American agriculture and the “New World” colonies in the 17th and 18th centuries, corn actually comes from Mexico originally. It’s believed that it was first cultivated or “domesticated” by indigenous peoples 9,000 or 10,000 years ago.

6. Corn was money in the American colonies

One of the reasons there’s a strong association between corn and the days of European colonies in America is that the crop was actually used as currency during this chapter in history. Per All Things Liberty, corn, wheat, tobacco, and furs were all accepted as “legal tender” in some local economies. It’s not as if there was a uniform system of currency between native regions, frontier camps, and budding settlements, so one assumes there was quite a lot of bartering. But corn could absolutely be used in exchange for goods or services and to settle debts.

7. Corn is still a commodity today

While the idea of corn being used directly as currency is of course silly today, it might surprise some to know that it is considered a very valuable commodity. Because of its value in livestock feed and processed foods in particular, corn is traded in high volume on the world stage, and per the volatility charts on FXCM has made for some of the most active trading of late also. You may not be able to use the crop as money, but with some strategic trading you might just make money from it!

8. Corn stalks used to consist of one ear each

This is an odd but fascinating detail. Look at any modern cornstalk today and you’ll see several ears growing out of it. A single stalk is a small harvest unto itself, which is one reason corn can be produced in such incredible volume in fairly compact space. But supposedly corn used to grow one ear to a stalk. Indigenous Americans bred variations of the crop to increase the yield of a single stalk, ultimately resulting in the kind of production we see today. 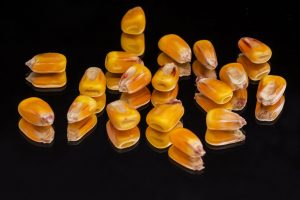 9. Ancient popcorn has been discovered

You might think of popcorn as a fairly modern way to make use of corn. But apparently the idea didn’t originate at sporting events and in cinemas. According to National Geographic, ancient “popped cobs” have been found in Peru. The indication is that some 6,700 years ago, people were eating puffed-up corn kernels — essentially popcorn — as a snack.

10. Every ear has an even number of rows

Do you know any fun facts about corn? Share them in the comments below!