The beautiful island of Curaçao is one of the most fascinating in the whole of the West Indies. You’ll find it out in the Caribbean, but did you know that it actually has links to the Netherlands?

There’s likely plenty more you can learn about the nation which will surprise you. Here are some fun facts about Curaçao we could find for you – whether or not you’re planning a holiday there!

Yes – Curaçao is actually under the governance of the Netherlands, despite the fact that you will find the island out in the West Indies!

However, Dutch rule states that Curaçao is an ‘autonomous state’, technically meaning it runs separately from the Netherlands. However, its technical head of state is still the King or Queen of Holland!

2. So.. where does Curaçao actually belong?

In fact, its general position in the world can get a bit confusing. It’s technically part of the Lesser Antilles, though you’ll also find people regard it as an island within the Continental Shelf.

Curacao is multi-lingual. In fact, most people here will speak four languages or a mixture of everything! Many people in Curaçao speak English, Dutch, Papiamentu and Spanish.

What’s Papiamentu, you ask? It’s actually Curaçao’s ‘official’ language. This is even more of a mixed bag of words and pronunciations! It’s actually a curious blend of Dutch, English, French, Portuguese and Spanish!

4. Be prepared for colorful streets and buildings!

Curaçao is one of the most colorful nations in the Caribbean. Its buildings are Dutch-inspired (given the island’s history and ownership). Most homes here are bright yellow, red, orange and more.

5. Religion varies across the region.

Curaçao has no one official religion, though it is actually home to the oldest Jewish settlement in the West! That’s because Jewish people emigrating away from Portugal landed here centuries ago.

US visitors won’t have to change their money up. To add to Curaçao’s confusing connections, US money is perfectly legal to spend on the island. However, the official currency here is the Netherlands Antillean Guilder.

Curaçao has a separate island, ‘Klein’ or ‘Little’ Curacao, and it is completely deserted. It is, however, free for you to explore! You’ll find a lighthouse and wreckage here. It’s also a fantastic place to visit if you want to feast your eyes on some stunning marine life.

Curaçao may not be the best-known nation on the planet, but it’s famous with deep-sea divers. One of its most popular dive spots is the Mushroom Forest, which is actually underwater coral that looks more than a little bit like fungi!

Worried about hurricanes when visiting the Caribbean? Curaçao largely avoids any kind of hurricane thanks to being just below the hurricane belt. Therefore, strong, hazardous winds here are very rare, if hardly possible. 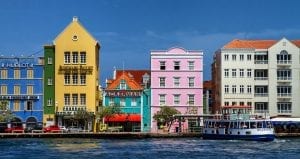 10. Here are some population stats.

The capital of Curaçao is Willemstad, and it’s a UNESCO world heritage site! This is partly thanks to the wide array of different Dutch architecture on display.

Is Curaçao part of the European Union?

No - despite the fact that Curaçao is owned by the Netherlands, it’s not part of the EU as it’s an overseas territory.

What is Curaçao best known for?

Curaçao is well known for its amazing beaches, its colorful buildings and its historic streets.

Is Curaçao a poor country?

Regrettably, Curaçao does suffer from poverty. It’s said to have a poverty rate of around 25%.

Do you know any fun facts about Curaçao?  Share them in the comments below!