Donkeys are loveable animals and are present in many countries. They originate from the desert areas of the world.

These are fascinating creatures and an excellent subject to learn more about. So without further ado, here are some fun facts about donkeys…

If you compared a donkey to a horse of the same size, the donkey would be stronger.

2. Here’s another thing they have over horses…

Donkeys have more upright hooves than horses do.

A donkey can live for over 50 years. 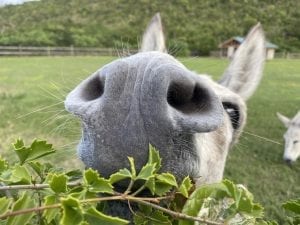 Donkeys are not easily startled, unlike horses which most definitely are.

Because of their amazing memory, donkeys can recognize areas and other donkeys they were with from up to 25 years ago.

6. Donkeys are brighter than they look.

Donkeys are considered to be very intelligent animals.

Compared to horses, donkeys are more independent in their thinking and can make decisions based on their safety. They have a keen sense of curiosity.

It is difficult to force or frighten a donkey into doing something that it sees as not being in its best interests, they can be quite stubborn but as a form of protection for themselves.

The large ears of a donkey help keep them cool.

One thing that donkeys hate is the rain. This could be because their coat is not waterproof. It should be noted that staying out in the rain for a long period could actually damage the health of the donkey. 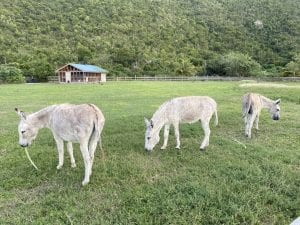 10. They have radar hearing!

From 60 miles away donkeys can hear another donkey, due to the sounds they make being picked up by their large ears.

Food is scarce in a desert, but donkeys can utilize 95% of what they eat. This means their manure is not a very good fertilizer for the land.

The digestive system of this animal can break down inedible vegetation and extract moisture from food efficiently.

Donkeys can become extremely distressed when a close friend has been moved away from them. Donkeys are classified as herd animals.

Donkeys don’t like being kept on their own. A single donkey will live quite happily with goats. 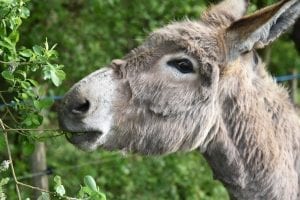 You might wonder what training a donkey is like. One of the key elements relies on showing the donkey, using words and actions, that they can trust the trainer to protect them from harm. The donkey will be able to learn what it is the trainer wants them to do if they take the time to show them.

14. Strength is important to donkeys.

A herd will choose the strongest donkey as their leader, even if it has been domesticated.

15. The leading donkey will sacrifice itself.

If we were talking about the wild, a lead donkey will stay to ward off an attack by a wolf or other predators so that the rest of the herd can escape to safety. 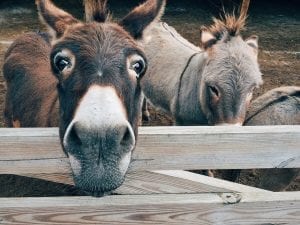 16. Donkeys care for one another.

Donkeys help each other with their grooming, a bit like how monkeys and chimps do.

The wealth of the Egyptians was thanks to the precious metals carried through Africa by donkeys!

Donkeys were used to carry silk along the ‘Silk Road’ from the Pacific Ocean to the Mediterranean in return for trade goods.

In Greece, donkeys were used for working on the narrow paths between vines and their work in vineyards spread as far as Spain.

18. They can be very soothing animals.

Quite often donkeys are fielded with horses, as they have a perceived calming effect on nervous horses. Sometimes a foal will turn to a donkey for support if it has left their mother. 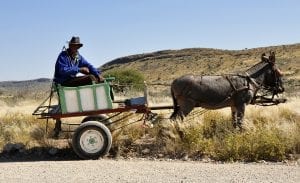 The donkey was associated with the Syrian God of Wine, Dionysius.

The Roman Army moved donkeys into Northern Europe using them in agriculture, vineyards and as pack animals.

Overeating is a real threat to the health of many donkeys, as they are grazing animals. 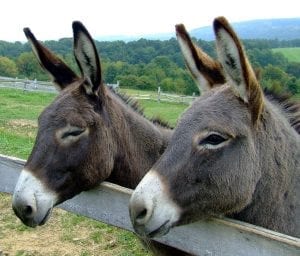 22. The UK first witnessed donkeys through the Roman invasions.

Donkeys came to England with the Roman invasion of Britain in 43CE.

Donkeys can prove to be a valuable lifeline to families in many regions of the world. Donkeys can help with water and wood fuel collection, as well as cultivation and transportation of produce to markets.

24. However, they will also protect you!

Donkeys are used as guard animals for cattle, sheep and goats since they have a natural aversion to canines and will keep them away from a flock. 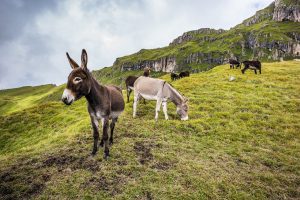 Yes! Donkeys are exceptionally friendly and love contact with humans, other donkeys and even horses.

Donkeys do have a bizarre dislike of dogs - which can make them excellent canine deterrents!

Do you know any fun facts about donkeys?  Share them in the comments below!