You may well have heard of Dover if you’ve been anywhere near the southern end of the UK. It’s the main crossing channel towards France, where travellers can head to and from Calais. What’s more, the town is world-famous for its stunning white cliffs!

However, there’s more to Dover than just trans-European travel and cliff faces – here are a few fun facts about Dover!

1. Dover is a thriving town.

Dover is a town that is absolutely thriving in various industries. Its ferry port is arguably its most popular trade, however, with a harbor spanning over 600 acres in size!

2. It’s named after its harbor.

The name ‘Dover’ is thought to relate to an ancient term referring to double banks, or the split that could seen heading into the harbor.

3. There’s lots to learn in Dover.

Dover has three principal museums, open all year round. Visitors can take in the Dover Museum, home to all manner of facts and history about the area. They can also check out the Roman Painted House and the Dover Transport Museum. 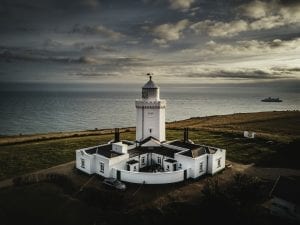 4. The cliffs are a highlight!

The white cliffs of Dover are made of chalk, and are said to be around 350 feet, or 110 meters tall. They stretch a distance of eight miles – further than you might imagine!

5. Dover is pivotal to many plots!

Dover has been referenced in many works of fiction, mainly thanks to its iconic cliffs. Such works include Moonraker, the famous James Bond story.

In fact, Bond creator and author Ian Fleming took to writing many of his 007 novels at the foot of the cliffs!

6. In fact, even the classics touch on Dover.

7. Dover was badly struck during wartime.

Dover suffered heavily during World War II, with the town and seafront having been devastated by bombing via the Luftwaffe. However, as you already know, the town has since recovered and redeveloped.

8. The town was very nearly a vantage point for the Romans.

However, Dover wasn’t always such an easy target for military attack. Roman Emperor Julius Caesar is said to have considered invading Britain from Dover, however, he found the cliffs to be a deterrent!

9. The castle here is magnificent.

Dover Castle has been a hugely important military fortress over the centuries. Building of the castle was overseen by King Henry II in the 12th century, though the fort continued to see development over many centuries that followed.

It’s thought that the castle’s site was in fact used strategically during the Iron Age, too! Therefore, Dover’s famous castle point may always have been seen as an important vantage point. 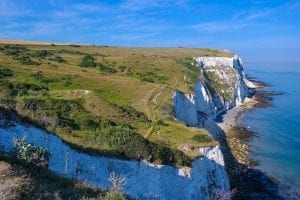 The White Cliffs of Dover

Dover has its own football team – Dover Athletic FC – who, at present, play in the non-leagues. However, they continue to come close to getting promoted into the big leagues!

11. Spy across the continent!

You can actually see France from Dover on a clear enough day, though you’ll need to head up to the castle to grab a chance!

Dover is also a very important site for the RNLI, who support the British coast with necessary lifeboat services. Dover lifeboat station boasts one of the biggest lifeboats in the country, which is referred to as Severn Class – it’s fantastic in an emergency – and the RNLI keeps running thanks to charitable donations. 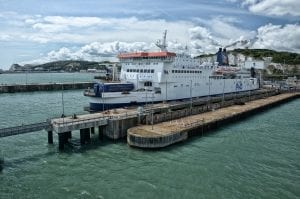 Is Dover a city?

Despite its massive importance as a port area, Dover still doesn’t have city status - it’s a quintessential English town.

Can you swim in Dover?

For many years, swimmers were banned from splashing around in Dover’s waters. However, this rule has since been relaxed.

Is it free to visit Dover Castle?

Adults and children will have to pay fees to tour the castle, but if you join as a member of English Heritage, you get to tour for free. There’s more information here.

Do you know any fun facts about Dover?  Share them in the comments below!