It probably sounds unbelievable, but the truth is that dragonflies were some of the first winged insects to evolve, 300 million years ago. Dragonflies (also known as darners or devil’s arrows) can be found on every continent except Antarctica.

We’ve prepared these fun facts about dragonflies – so the next time you notice them hovering around in your back yard you’ll see them in a different light! They’re the acrobats of the insect world and, with their striking colors, are a true sign of summer in the garden.

2. There are thousands of dragonfly species.

Around 7,000 species of real dragonflies are alive today, and, together with the closely related damselflies, they form the group Odonata.

3. Ever caught a dragonfly?

Dragonflies are hard to catch, which makes it hard to conduct tagging.

Scientists have trailed migratory dragonflies by fastening tiny transmitters to their wings with a combination of eyelash adhesive and superglue. 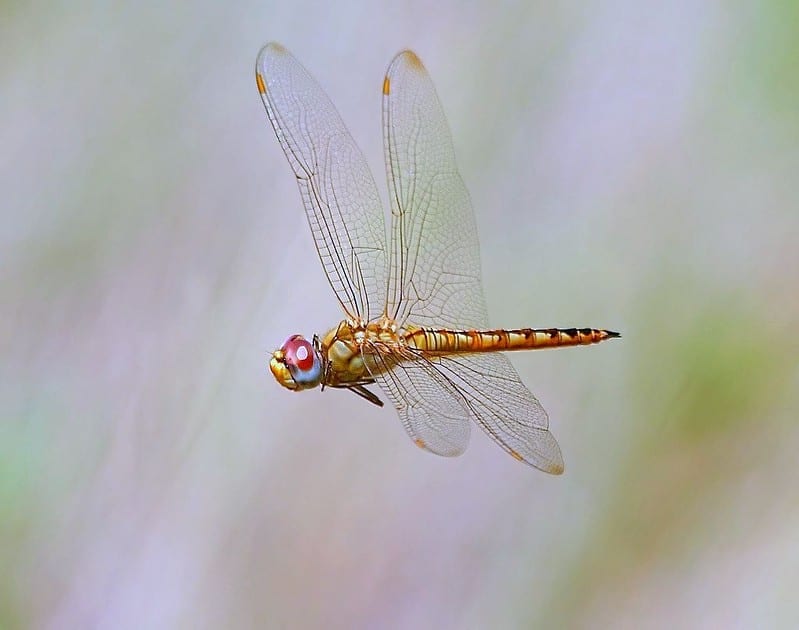 Many species of dragonflies gather in swarms to feed or migrate. Why? Possibly to protect themselves against predators, but researchers don’t know that for sure.

The dragonfly’s head has enormous compound eyes, which contain 30,000 features, each bringing in information about the insect’s surroundings.

6. They’ll spend most of their lives under the bubbles.

95% of the life cycle of a dragonfly is spent underwater. 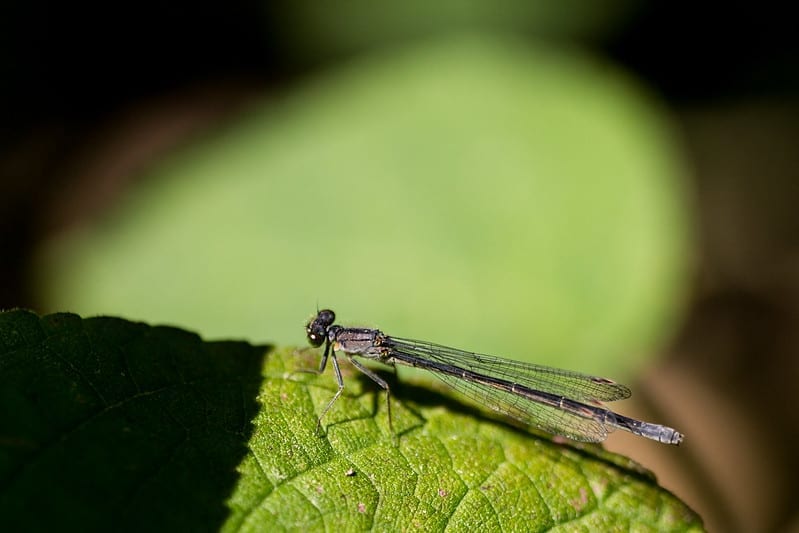 7. Their egg cycles are strange.

The females lay eggs in or near water which usually hatch after a few weeks whilst the eggs of some species lie dormant over winter.

The hatched larvae feed on live prey including small fish which may be larger than themselves.

As the larvae grow they cast their skins up to 15 times.

When the water warms up and the day length gets longer the fully grown larvae climb up marginal vegetation or out onto a bank and cast their skin to emerge as an adult.

The newly emerged dragonfly takes a while to pump fluid into the wings and abdomen.

It can take several hours for the wings to harden before it can take its maiden flight, find a mate and start the cycle all over again. 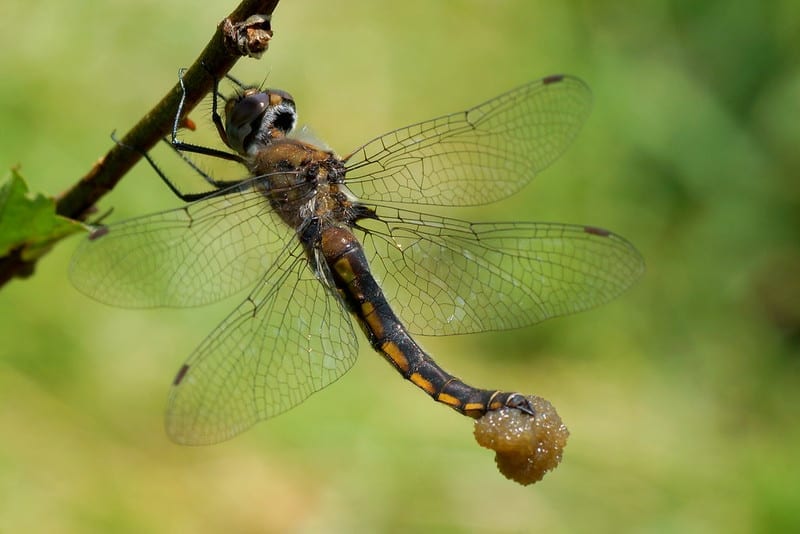 10. They’ll see you before you see them.

They’re great fliers. They’ve got two sets of wings so they can fly straight up or down, backward, upside down, and hover. Dragonflies are also amazing hunters.

In their larval stage, they live in the water and eat anything that comes near them, including aquatic insects, tadpoles, and small fish.

As adults, they eat flies, mosquitoes, grasshoppers, butterflies, flying ants, and even other dragonflies, which they catch while they’re in flight. 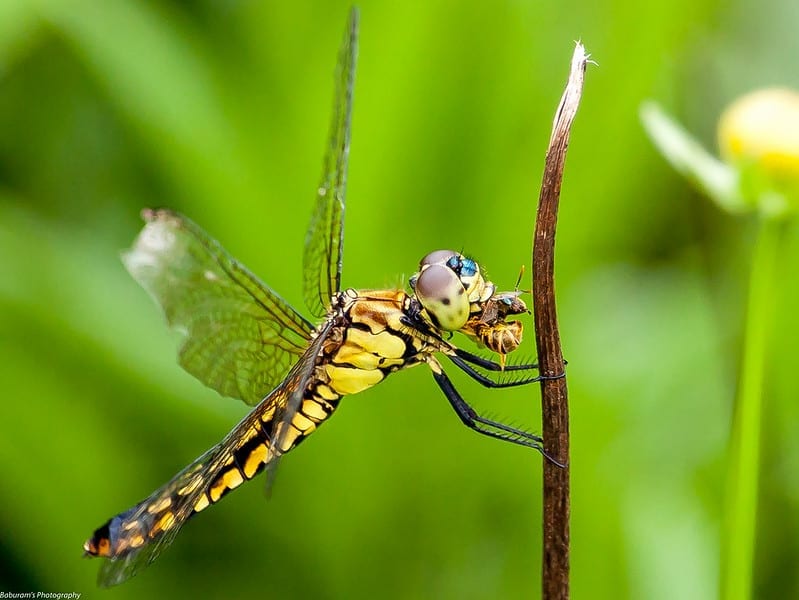 A dragonfly eating a bee

They don’t simply chase down their prey, they hitch them from the air with estimated aerial ambushes.

Dragonflies can estimate the speed and trajectory of a prey target and regulate their flight to intercept prey. They’re so skilled they have up to a 95% success rate when hunting.

They’ve got an impressive ability to rip apart prey that takes their predatory prowess to another level.

Thankfully, dragonflies can’t bite humans. Most of the species don’t have mandibles strong enough to break our skin.

In the life-cycle of all dragonflies, there are three stages: egg, larva, and adult.

During egg-laying, male damselflies, chasers, skimmers, and darters guard the females with which they have just mated, either by staying linked ‘in tandem’ or by flying in close attendance.

Some female damselflies submerge completely to lay their eggs, often using their still-attached partner to pull them up again afterwards.

Eggs hatch within 2–5 weeks or the following spring, if we’re talking about the emerald damselflies and some hawkers and darters. 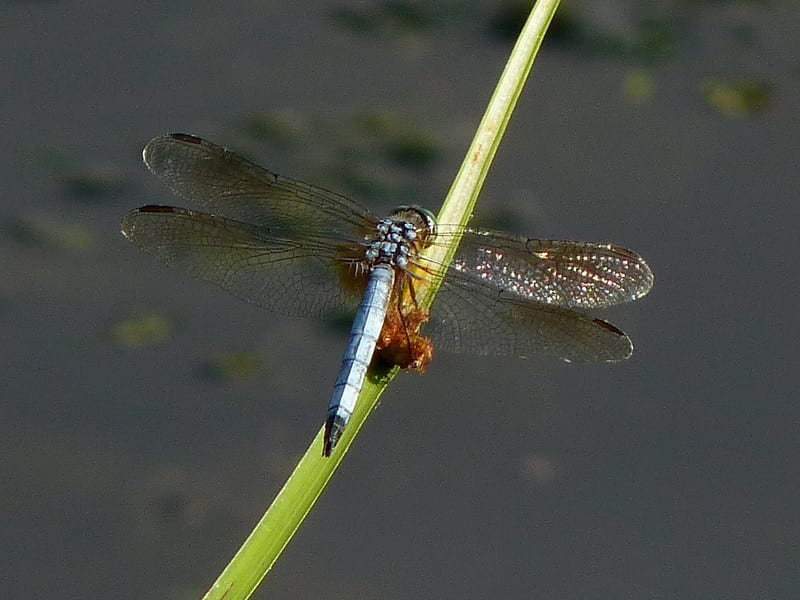 A typical dragonfly larva has six legs, wing-sheaths, and an extendable hinged jaw that can shoot out in an instant and catch prey.

Experiencing incomplete metamorphosis, dragonflies aren’t like other winged insects, such as butterflies.

19. The transformation process can seem a little grisly.

In their final stage larvae sit in shallow water, for several days, getting ready for their final molt and starting to breathe air.

After they find secure support, they reallocate their body fluids, pushing the thorax, head, legs, and wings out of the larval skin. 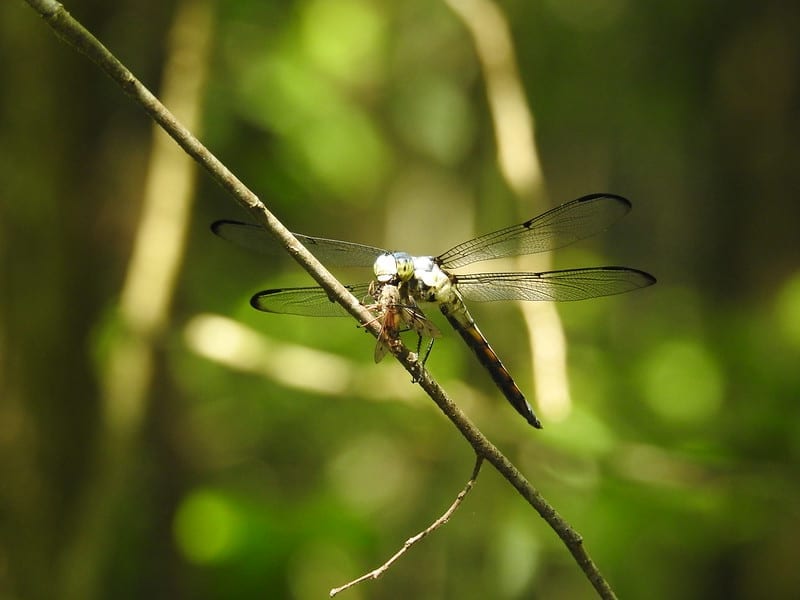 20. It takes a while for dragonflies to really take flight.

The dragonfly’s first flight (maiden flight) is weak and typically covers only a few meters.

21. They never stay out of the water for long.

When mature, adults move back to the water to breed.

The life expectancy of adults is short, typically no more than a week or two, but sometimes they can last 6–8 weeks. 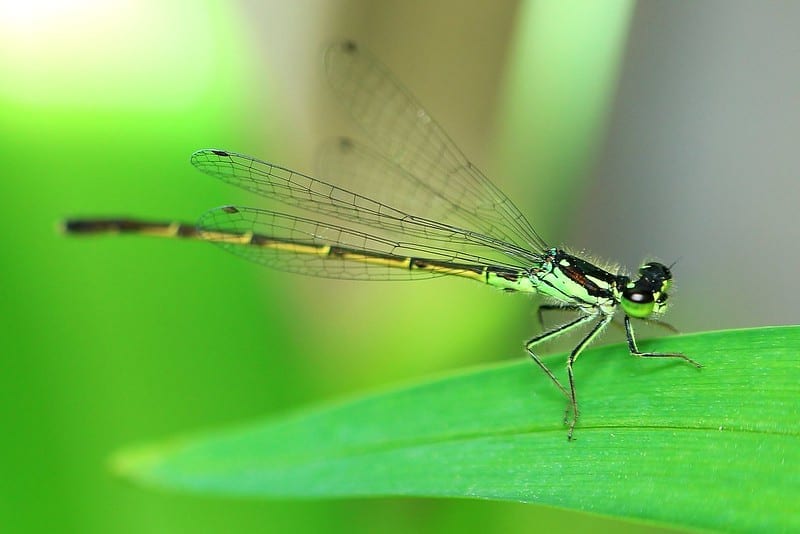 Adult dragonflies have voracious appetites and can be observed hunting other flying insects, particularly small flies, on sunny days.

24. However, they are under threat.

Dragonflies need protection from pollution to habitat loss. Thankfully, there are sanctuaries around the world.

25. There are sanctuaries set up to help dragonflies.

The United Kingdom got its first dragonfly sanctuary, the Dragonfly Centre, in 2009.

Dragonfly enthusiasts also can visit a sanctuary in the Dragonfly Sanctuary Pond in Albuquerque, New Mexico. 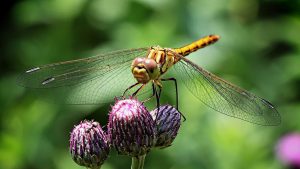 The dragonfly does a great job in helping humans by controlling populations of pest insects, especially those that bug us most, such as mosquitoes and biting flies.

A single dragonfly can reportedly eat anywhere from 30 to hundreds of mosquitoes per day.

They also inspire us to create new technology — from drones to artificial visual systems — based on their incredible skills at flight and vision.

The least we humans can do to return the favor is to support the conservation of their habitats so they can continue for another 300 million years.

Can dragonflies hurt you?

No - it’s very unlikely unless you aggravate one enough that it bites you!

Yes - dragonflies are major predators for mosquitoes, and they will help to keep them out of your garden.

Do dragonflies only live for a day?

No - they can live for much longer, up to six months in some cases!

Do you know any fun facts about dragonflies? Share them in the comments below!

Are you interested in insects? Check out these fascinating facts about spiders…