Dublin is one of the most intriguing cities Europe can be proud of. It has a rich history, fascinating culture, and of course, incredible pubs! It’s known as being a place of art, celebration, and music. But, let’s get to know Dublin a little better, together. Here are some fun facts about Dublin!

Dubliners (those who live in Dublin) commonly speak English and Dublinese. This language is technically a combination of slang and curse words that the natives commonly use!

2. Dublin’s gifts to the world!

While the city is known for many things, many famous people are also known for coming from this incredible city! Dublin has given the world U2, Colin Farrell, Sinéad O’Connor, Oscar Wilde, Samuel Beckett, James Joyce, and plenty more! And, we are sure that there is plenty more talent to come from Dublin in the years to come.

While we have mentioned quite a few celebrities who come from Dublin, did you know that one of the world’s most famous felines also came from this city? The famous MGM Studios logo lion (also known as Cairbre, or Leo) actually came from Dublin! While his roots definitely lie elsewhere, the MGM lion was actually born in Dublin Zoo back in 1919. 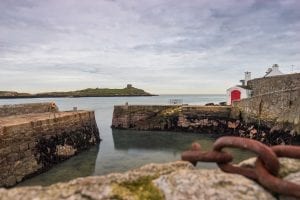 While you may think that the word “Dublin” just sounds very Irish and is fun to say, it actually has a meaning! It is from the old Irish Gaelic word “Dubh Linn”, which means “Black Pool”. This black pool refers to the place where the Liffey, and the Poddle, which runs beneath Dublin, meet.

Dublin is certainly known for its nightlife and its family-friendly pubs. In fact, you definitely won’t have a hard time finding somewhere for a hot meal, a nice drink, and a warm atmosphere. There are currently over 770 working pubs in Dublin!

6. The oldest pub in the world!

Situated just outside of Dublin is the world-famous Sean’s Bar. This bar is the oldest one in all of Ireland, and potentially, the whole world! It is said that its walls have been there since 900 AD, and they have been serving people ever since! 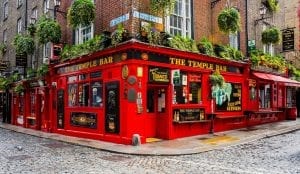 The tallest hill in Dublin is Sugarloaf, but it only reaches 1,389 feet above sea level. While that is definitely an impressive height, it isn’t quite enough to be considered a mountain!

Many of us celebrate Saint Valentine’s Day every year without knowing much about the saint himself. While he was executed and buried in Rome initially, the 3rd Century Saint was then exhumed and brought to Dublin. Now, his remains can be found in a vault under the Carmelite Church and can be worshiped next to the shrine and statue in his honor.

9. Relics from a recent past.

Dublin is known for its rich and vibrant history, and you will likely find many people looking closely at parts of O’Connell Street. People specifically look at the O’Connell Monument, which still has bullet holes in it from the Easter Rising of 1916. 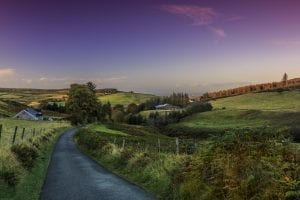 Guinness is a true staple of Ireland and continues to be one of the world’s most popular beers to this day. In fact, it is so important to the nation that Arthur Guinness himself signed a very long lease on the brewery! To be more specific, the lease will last for 9,000 years!

Is Dublin a rich or poor city?

Ireland has certainly gone through some difficult times and has experienced economic disparities. However, Dublin itself is considered to be one of the richest cities in the world today!

What is Dublin known for?

Dublin is known for its historic monuments, vibrant culture, pub scene, and more! Millions of tourists visit this incredible city every year - it’s a gorgeous city with something new to offer on every trip.

What is the currency in Dublin?

As the Republic of Ireland is part of the European Union, the main currency used here is the Euro, or EUR. Despite sharing the same island, cities in Northern Ireland continue to use the British Pound, or GBP, as they are part of the United Kingdom.

Do you know any fun facts about Dublin? Share them in the comments section below!