Even if you have no idea where it is, and you’ve never been before, you’ll likely have heard of Easter Island.  That’s because its amazingly iconic stone heads – buried in the ground – are truly magnificent to behold.

But surely there’s more to the island than just a few statues scattered around?  Of course there is – here’s some fun facts about Easter Island to help you learn more about this mysterious place.

1.    There are more than just heads on Easter Island.

First of all, let’s blow your minds a little – the heads on Easter Island have hidden bodies. They actually extend into the ground when you dig deeper!

The heads are called the moai, and there are 887 of them at last count. Their presence is partly what made the region a UNESCO World Heritage Site.

The island was home to an ancient race of people called the Rapa Nui. However, Europeans and any further outsiders wouldn’t reach the location until 1722.

That was when Jacob Roggeveen first found the island, naming it after the date he landed on the shore. It was Easter Sunday! 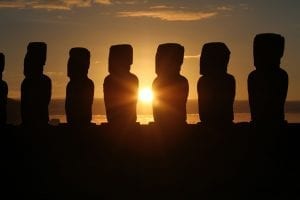 The moai are truly huge. They may not look it from afar, but they stand up to around 13 feet tall.

Another interesting fact about the moai is that none were standing up upon their discovery. They’ve been replaced and repositioned over the years.

6.    The Easter Island culture is captivating.

Rapa Nui culture is still practiced to this day, though it’s thought only 3,000 people take part. However, as Easter Island has opened up as a tourist-friendly location, more and more people are showing interest in the ancient culture.

The Island can be found deep in the Pacific Ocean, with the nearest continental country being Chile, around 3,600km away. It will take you around five hours on a flight from Santiago to Easter Island!

The nearest fellow island is Pitcairn Island, which is still an astonishing 1,289 miles away.

Easter Island has modernised hugely over the years, with full electricity and modern housing. Residents even have access to basic internet, though much of their food supply ships in through sea and air. 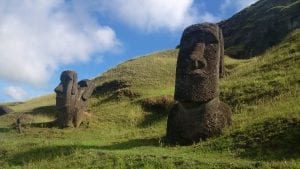 The moai were moved across the island into their current spots, but no one really knows how. There are schools of thought which suggest logs were used to roll them around.

It’s thought that each moai represents a different family line which has passed on. Most of them are identical.

The peak of the island can be found in Terevaka, a volcano which is around 1,600 feet above sea level.

Someone once tried stealing a piece of a moai – a chunk of ear, specifically – only to be caught and fined $17,000. He could have faced up to seven years in prison – and as a result, there have been stronger cordons put in place to restrict tourist access.

Yes - massively so. Easter Island is considered one of the safest places on Earth, but that’s no reason to go looking for trouble!

Yes, but not by all. Believe it or not, the most spoken language here is Spanish!

What’s the currency on Easter Island?

To spend money here, you’ll need to change your currency into Chilean Peso.

Do you know any fun facts about Easter Island?  Share them in the comments below!