Electric eels really do give off a bit of a buzz! These curious creatures are closely related to the catfish and the carp, and you’ll normally find them milling about in murkier waters than most. But what else do you know about these shocking specimens? Here are some fun facts about electric eels that might surprise you.

Electric eels can be shy, though most are determined and clever hunters. They can emit enough electricity to cause a horse to tumble! They don’t hunt horses, mind, they prefer other fish!

Electric shocks are produced by electric eels by emitting up to 860 volts to their prey.

3. It’s all about cooking your food thoroughly.

Electric eels use their electric shocks to stun their food prior to consumption. 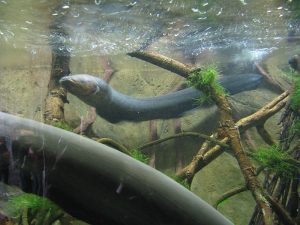 4. They are pack animals, weirdly enough.

Electric eels hunt in packs. They swarm around their prey, circling to entrap their victims and then attack. Small tetra fish are often on the menu! These small fish are known to jump out of the water when stung.

5. They are completely toothless!

Electric eels usually stun their prey and then devour them whole. They have wide mouths with a strong bony grip but they have no teeth with which to chew food or bite pieces off.

6. Electric eels live in murkier water for a reason.

They live towards the bottom of lakes, in coastal areas or river beds, and often camouflage themselves in murky water. This means they go relatively undiscovered until it’s too late when their prey sees them, so they can’t escape.

7. Electric eels can breathe one of two ways.

Eels do have gills but generally breathe oxygen via their mouths. 80% of their intake of oxygen is obtained this way.

9. Electric eel stings are nothing to be toyed with.

Muscular pain and spasms are felt quite quickly following a sting by an electric eel. Respiratory problems are also a symptom. Heart failure can also be the result of a sting from an electric eel! 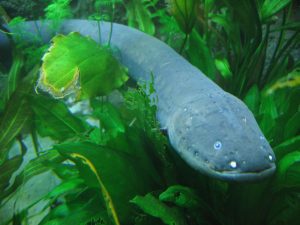 10. An eel will still sting you even after it’s died.

Electric eels have been known to continue stinging for up to nine hours after they have died!

11. It’s a very rare fish in terms of its behavior.

12. We found a third of all electric eel species in the past decade. 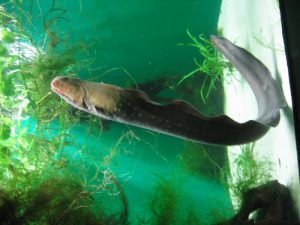 13. But they’ve been around for much, much longer!

Word is that they have existed since between 100 and 200 million years ago!

14. They have very tough skin for a reason.

The slimy, shining skin covering electric eels forms part of its self defense mechanism. It helps them move through the gritty water of low levels, close to sea, lake or river beds. This slippery covering means they have smooth passage through the water, also, so that they can slip through plants of neotropical waters more easily.

How long do electric eels live?

What animals prey on electric eels?

There are no known predators of electric eels apart from humans! We’d better keep an eye out for them becoming the dominant species, then!

Can you get killed easily by an electric eel?

Do you know any fun facts bout electric eels? Share them in the comments below!