Flamingos are one of the most exotic-looking birds! Forget the plastic ones on your neighbor’s lawn, real flamingos are the most amazing birds! These beauties are strong but rare swimmers and powerful fliers, even though they’re most often seen wading.

Flamingos have fascinated people since ancient times. Illustrated in caves dating back to 5000 B.C. and in modern literature, they truly are a sight for sore eyes. Why are these tropical birds so mesmerising? Let’s go through these fun facts about flamingos and find out…

You can easily recognise the flamingo by its red-purple colored feather.

2. Flamingos are found on at least four continents.

3. There are more than a couple of types of flamingo.

There are 6 known species of flamingo. 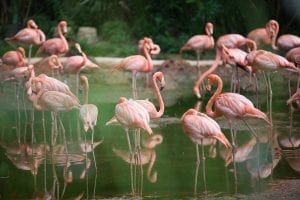 4. Flamingos are likely bigger than you think.

5. They are built for purpose.

Flamingos’ proportions and light body mass allows them to fly at a speed of 50-60 kilometers per hour and reach distances up to 600 km.

6. There’s a day dedicated to them.

When do we celebrate these famous pink or reddish colored birds? The 29th of May is celebrated as Flamingo Day.

7. Their name derives from Spanish.

The word “flamingo” derives from the Spanish and Latin word “flamenco” meaning fire, referring to the birds’ feathers bright color.

8. Flamingos have a very varied diet.

Flamingos eat shrimp, snails, and algae. The foods’ chemical, the carotenoid pigment, is what turns a flamingo’s feathers pink. The more they consume the chemical, the stronger the color of their feathers.

If a flamingo stops consuming the carotenoid pigment through its food, it loses its color and can turn white. So the saying you are what you eat is just perfect for flamingos! To get their pink and red feathers it takes flamingos about 3 years. 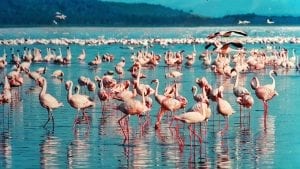 10. Turn up the brightness!

Adult flamingos’ feathers array from light pink to bright red due to their food supply. The more well-fed the flamingo is, the brighter the feathers.

11. Flamingos may have their reasons for standing one-legged.

12. They can pivot their legs curiously well.

The flamingo’s long and thin legs have a special characteristic. Flamingos can “lock” their leg into place so it needs zero effort to stand.

13. They are amazingly stable.

They can even sleep in this position. If there’s a bit of wind, they’ll sway from side to side but still manage to stay standing in their sleep. What an awesome balancing feature!

The noticeable “knee” of the flamingo is the ankle joint. The real knee is close to the body and can’t be seen because of the feathers.

15. Flamingos need their own runways!

Flamingos need to build up some speed before taking off into the air. So, even when they’re in the water they take a short run-up. 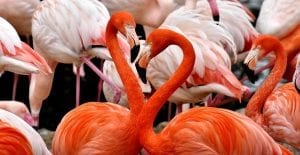 16. Flamingos can cross water on foot.

Because of the webbing in between their 3 toes flamingos can run on water. This webbing is one of the reasons they balance so well on just one leg.

Flamingos bend their long necks down to slurp up lots of water containing all that delicious algae and shrimp they like to eat. They use their tongue and rows of small combs in their beak to keep the food they really like, after spitting out the water.

18. They can filter out their food and drink.

Flamingo beaks and tongues are lined with a hair-like structure that filters out mud and silt from their food known as lamellae. 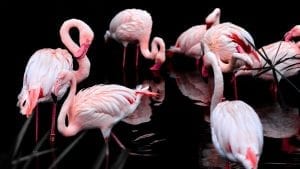 They are very social birds living in colonies of thousands.

20. What do you call a group of flamingos?

A group of flamingos is called a stand or flamboyance.

By nature, flamingos are monogamous and only lay around one egg per year. Baby flamingos hatch in a mud nest. 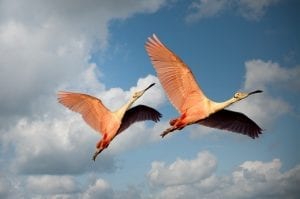 Both parents keep the egg warm before it hatches. A few days after hatching, the parents start feeding their little ones with a milk-like substance rich in fats and proteins.

Flamingos don’t have mammary glands, but they produce a certain “milk” to feed their chicks. Besides fats and proteins, this mixture contains red and white blood cells.

The flamingo is the natural bird of the Bahamas. 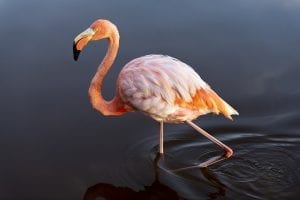 In 1959 the doo-wop group “The Flamingos” released their hit song “I only have eyes for you”.

Flamingos, being water birds, only choose to live in and around lagoons or lakes.

The inventor of the pink plastic lawn flamingo, which first went on sale in 1958, is Don Featherstone of Massachusetts. 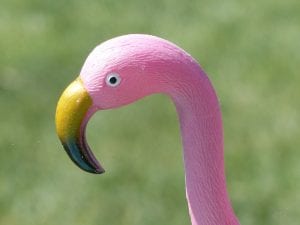 28. Some flamingos can live to be decades old.

There was an old greater flamingo that lived to be 83 years old at the Adelaide Zoo in Australia. The flamingo sadly passed away in 2014.

During migration, they fly at up to 37 miles per hour and travel a distance of over 300 miles to reach their new habitat.

Flamingos spend as much as a third of the day cleaning and preening their feathers.

While cleaning their feathers with the help of their beak, the oil produced in a special gland is spread over the feathers. 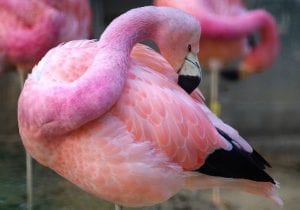 31. Beak curvature comes after a short while.

Baby flamingos haven’t got curved beaks. They become curved after a few months.

A flamingo’s lifespan is usually between 20 and 30 years – but it’s recorded that in captivity they can live up to 50 years or longer.

33. They were once widely eaten.

The people of Ancient Rome were known to eat flamingos’ tongues as a delicacy. 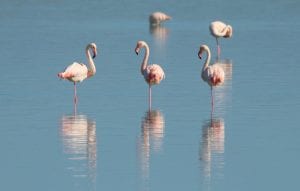 Is a flamingo’s poop pink?

No - oddly enough, it’s the same color as most other birds’!

Is there such a creature as the black flamingo?

Yes - black flamingos do exist, but they are extremely rare, and only two have ever been found.

Can you own a flamingo as a pet?

No - in most cases, it is illegal to own a flamingo as a pet - they need very particular conditions and feeding programs.

Why are flamingos pink?

Flamingos eat a lot of shrimp which are crammed full of carotene - a bright red color - and eating this natural pigment all the time affects the birds plumage. it really is that simple!

Do you know fun facts about flamingos? Share them in the comments below!