Frogs are extraordinary amphibians that are known for their croaking sounds, jumping abilities and their slimy skin. But what else is there to learn about them? Here are 13 fun facts about frogs.

1. There are many, many frog species!

There are over 4,700 frog species around the world. With Antarctica being an exception, frogs can be found on every continent on Earth.

2. Some can be fairly nasty!

A gram of toxin that is produced by golden poison dart frogs can kill up to 100,000 people.

3. Some come in fearsome groups!

A group of frogs is called an army. 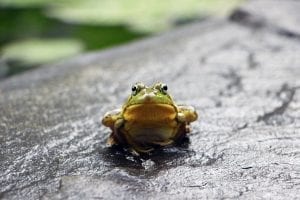 4. Some frogs are evolutionary marvels.

In Indonesia there is a frog that breathes solely through its skin and has no lungs.

5. Cool name, not sure about the poison…

The blue-Jeans frog is a type of poison dart frog, which has a red body and blue legs. It is also known as the strawberry dart frog.

Most frogs have teeth only in their upper jaw. These teeth are utilized to hold their prey, so they don’t move until the frog is able to swallow it.

The Goliath frog is the biggest frog in the world and lives in West Africa. It can weigh more than seven pounds (3.175 kg) and can measure up to a foot in length.

8. Can you imagine if we could do that?

The majority of frogs can jump as high as 20 times their own height, with some being able to jump even higher.

9. Croaking varies from frog to frog.

Male frogs use croaking as a means of attracting females. Each species of frog have their own distinct croak. 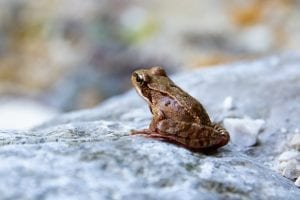 A frog usually sheds its skin completely every week. The frog typically proceeds to then eat the dead skin.

11. They are keen cuisine in some countries.

The French famously love to eat frogs legs – apparently they taste a bit like chicken. They love them so much that they consume 160 million frogs legs every year!

You are able to see the internal organs, muscles and bones of the glass frog as it has translucent skin. You can even view the food being digested and its heart beating! 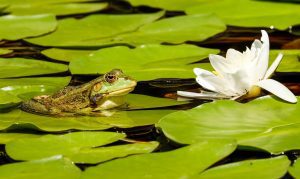 The male Darwin’s frog swallows’ tadpoles once they hatch and keeps them in their vocal sac for around 2 months. This is done to allow them to grow, and he coughs up fully formed frogs after the 60 days.

What do frogs need to survive?

All frogs need to stay moist - it’s how they drink and stay hydrated! They don’t drink water through their mouths.

Is it cruel to keep a frog as a pet?

No, providing you look after them carefully - in fact, under the right conditions, they can be very low maintenance!

Weirdly, some frogs are more intelligent than others. On the whole, they tend to be quite instinctive, and can even tell the difference in their fellow neighbors’ voices!

Do you know any fun facts about frogs?  Share them in the comments below!