Aren’t gazelles graceful creatures? These speedy, nimble critters are best known for their endless grace – and they are some of the most stunning mammals you’ll spot roaming around the African wilds. However, there’s more to these spry beasts than meets the eye – here are some fun facts about gazelles that might impress you!

1. How do gazelles do so well in desert areas?

Gazelles are extremely well-adapted to living in areas that are notoriously dry and hot. That’s because – weirdly – they have the innate ability to shrink down their organs – thus, not needing as much water or energy as they normally might!

2. That’s not the only bizarre body fact…

Weirdly enough, gazelles have two stomachs, too. This means that if they go without food for a long time, they can take advantage of their second stomach’s storage facility!

3. They’re nowhere as tall as you imagine them to be.

Gazelles are actually pretty small. They tend to measure up to two feet in height on average – and in fact, that makes them some of the smallest animals in the antelope family, despite what you may have heard otherwise. 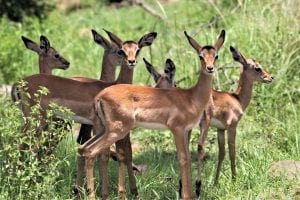 4. They have all kinds of odd relations.

Gazelles are, of course, related to antelopes – but did you know that they are distant relatives of cows, too? Weird but true!

5. A blistering pace – but they can be caught!

The average gazelle can reach up to 100 km/h at full running speed – that’s likely to make for a pretty tough hunt for any apex predator. That said, they make a match for the likes of the cheetah, the world’s fastest land mammal.

6. A gazelle’s horns won’t always tell you their gender.

Gazelle horns don’t tend to follow many rules in terms of the evolutionary aspect. It’s a common misconception that only male gazelles have horns – as this really can vary from species to species.

7. Gazelles learn to walk and run from an early age!

The baby gazelle won’t stay grounded for long. It’ll normally be able to stand, walk and then run within days – much like giraffes, they can be born standing up!

8. But, these animals do stand still occasionally!

Gazelles are not always on the run! In fact, many choose to hide in tall grass if they know that there are predators lurking around. Not a bad idea to conceal yourself, generally!

9. Gazelles have been threatened and made extinct for decades.

There are many different species of gazelle, however, there is a handful that is now completely extinct. These include the Queen of Sheba. These wonderful creatures were – regrettably – hunted by humans to complete extinction over 70 years ago. 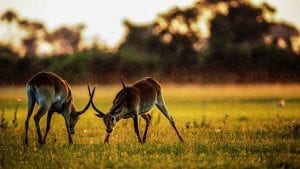 10. They will buddy up with other vegetarians.

Gazelles don’t tend to worry about sharing food or grazing near other herbivores – as naturally, they won’t pose any threat. In fact, zebras and gazelles tend to get on pretty well!

It’s not a good idea to look for a gazelle as a pet. No one has successfully domesticated them properly, and what’s more, some species are considered threatened or endangered.

Gazelles love get-togethers – it’s not unheard of that you’ll find up to 800 gazelle in the same tribe. 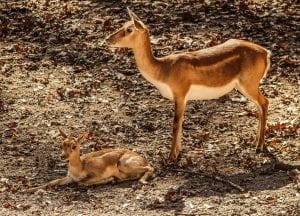 What type of animal is a gazelle - a deer or an antelope?

A gazelle is technically a type of antelope, and you can normally tell them apart based on their body colorings as well as their majestic horns. They look a little like deer, however, they are not related. They are loosely related to bovines!

Yes - lions are known to feast on gazelle if they can catch them. However, lions don’t tend to be great at endurance running (unlike the cheetah), so they will normally spring and leap upon them to catch their prey.

Yes - the gazelle is a very smart and adaptive creature that’s learned more than a few different ways to escape their predators over time. They also believe in safety in numbers, and are built to withstand all kinds of harshness in their climate.

Do you know any fun facts about Gazelles? Share them in the comments below!