People all across the US and indeed the world know George Washington as the first face of the American Presidency.  It was Washington who helped to lay down the key elements of the US constitution, and of course, to this day, you will find him on US money and in the skyline up at Mount Rushmore.  But how much do you actually know about the first US President?  Here are some fascinating facts…

1.    Do you REALLY know when Washington was born?

There’s been some arguments over Washington’s actual birthday. Many believe it to be February 22nd, 1732 – however, he was actually born on February 11th, 1731.  The reason behind the confusion?  Washington was actually born during a time when Western calendars were moving over from Julian to Gregorian!

Not much is actually known about Washington’s early life. As a result of this, there have been many legends published about the man!

3.    One of the biggest urban legends about George Washington is false.

George Washington never had wooden dentures! Bizarrely, it’s a common misconception that the first President used wooden teeth to eat his meals.  He used dentures made of a variety of materials – including silver alloy! 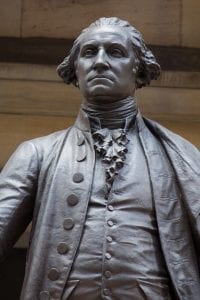 It was a style of the time for many men to wear wigs – however, Washington bucked the trend. All the pictures you see of the statesman depict him with his full head of hair!

5.    George Washington is still the US’ most powerful-ever commander.

Washington still holds the highest rank in the military of all time. He was a remarkably decorated military man as well as the first President, and as such, the US passed legislation that allowed him to be named the General of the United States Armies.

In fact, most people appeared to call him General throughout his life. Martha Washington, his wife, did the same!

6.    The story about the silver dollar? Fake news.

Many stories are told about George Washington, but he never skipped a silver dollar down the Potomac River. The fact is, silver dollars didn’t even exist around the time frames the legend is supposedly set!  It’s thought that this is a favourite story for people to show how physically strong he was!

7.    Washington took out a loan on inauguration day.

At the time of his inauguration, Washington actually had to borrow money to attend! Can you imagine a president doing the same nowadays?

In fact, Washington eventually received a fair cut from the yearly national budget. In today’s money, he would receive around $80 billion annually!

8.    Washington is buried close to family.

George Washington is buried in a burial hall close to the Potomac River. A popular myth is that he’s actually resting below the US Capitol Building.  This was the original plan, but Washington desired to be close to his family. 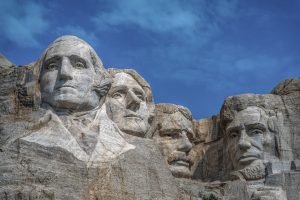 In some areas of the world, Washington is actually worshipped as a god! In Hawaii, some priests practicing Shinto revere the President as a man who attended to godhood once he passed away.

It’s been suggested that Washington could never have children of his own. He never sired any children himself, and there have been various theories suggesting why this might have been the case.  However, unless you can find a time machine, it’s all speculation.

Do you know any interesting facts about George Washington?  Share them in the comments below!