Giraffes really are bizarre creatures – is there anything on Earth with a neck so long? Probably not! What’s more, they have intriguing diets and habits – it’s likely you might have seen one or two of them if you have visited a zoo or safari park before, but how much do you know about these strange, lanky mammals?

Here’s some fun facts about Giraffes to help clue you in on some of the more fascinating bits and pieces about them.

Despite giraffes having amazingly long necks, they actually can’t use them to pick anything up off the ground with. They’re too short to bend back down! Therefore, if a giraffe wants to drink from low down, for example, they have to kneel or crouch.

2. They don’t tend to need much water.

However, giraffes often won’t need to drink too often. They might only need to take on water every couple of days – this is as a result of them getting plenty of water from the leaves and vegetation they eat so much of.

As you may know, giraffes only eat plants. However, it is thanks to their amazingly long tongues that they can take branches from trees down which stretch far up and away. 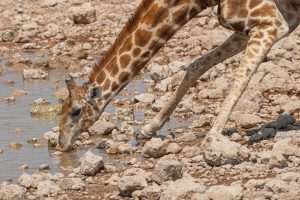 4. No giraffe markings are the same.

Giraffes have unique markings – no – we really mean unique! They are like our own fingerprints in that no two giraffes will ever have the same markings. It’s therefore completely possible to tell two giraffes apart.

5. Giraffes stand up from birth.

Giraffes are born standing up, and as a result, will spend most of their lives this way. In fact, a baby giraffe learns to walk extremely quickly. They will normally know how to move around on their feet within an hour! That’s showing us!

6. You can’t outpace a giraffe!

Giraffes are amazingly speedy on the ground. They are thought to be able to cover ground at around 35 miles per hour.

7. There’s nothing taller in the animal kingdom.

Giraffes are, unsurprisingly, the tallest mammals currently living on land. It’s thought that the tallest giraffes, likely to be male, can grow to around 18 feet tall. That’s over three times as tall as most humans!

8. Giraffes persist without much shut-eye.

The average giraffe is unlikely to need much sleep. In fact, it’s likely unheard of for a giraffe to sleep more than half an hour in a 24 hour period.

9. The height is all to do with trees!

Giraffes evolved to be so tall so that they can easily reach trees for their own, unique food supply. However, their amazing stature also allows them to easily look out for sneaky land predators such as hyenas. 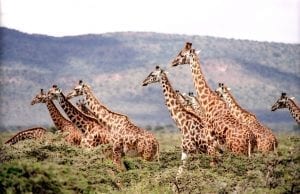 10. They’re only ever wild in Africa.

While you may find that giraffes are common across zoos and safari parks in Europe, North America, and beyond, you will only find them naturally in the wilds of Africa.

11. Many giraffes are under threat.

Sadly, their habitats are under threat due to logging. This means that giraffes are technically listed as vulnerable, on the whole – it’s thought that we have lost around 40% of the world’s giraffe population in the past 35 years.

It’s thought that giraffes are not unique but are one of four different species. Even more interestingly, research has shown that each of the species appears to have evolved completely separate from one another! 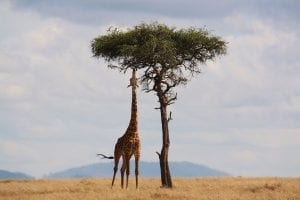 13. They are very hardy mammals!

Giraffes can live longer than many mammals in the wild. You may find that some grow to be as old as 25 in the wild, however, they can be as old as 40 in captive conditions.

Giraffes aren’t silent, despite common belief. They are just amazingly quiet, especially for mammals! They are thought to make low-pitched noises that we are simply unable to physically hear.

15. Their walking patterns are… interesting!

Giraffes walk in a very interesting way. Unusual for a mammal, the giraffe will generally move two legs on one side of their body at a time, which gives them an odd, swinging gait. 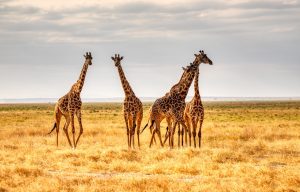 Newborn giraffes are, as you might expect, already impressively tall. As well as being able to walk within an hour of birth, they are also likely to be around 6 feet in height – as tall as many grown men!

17. Here’s the weirdest fact about giraffes…

Believe it or not, the exact number of bones in a giraffe’s neck is no more than seven. This is – astonishingly the same number of vertebrae in a human neck! Therefore – just because their necks are longer – doesn’t mean they are more complex! 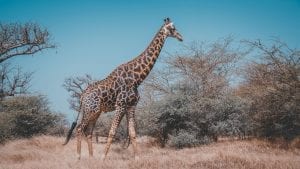 On the whole, yes! Research actually shows they have quite complex social lives!

Are giraffes on the brink of extinction?

No - but they are listed as vulnerable on the IUCN Red List.

Yes! On the whole, they love company and even enjoy being fed and stroked.

Do you know any fun facts about giraffes?  Share them in the comments below!

This page was last modified on January 23, 2022. Suggest an edit