Glaciers are truly curious natural phenomena – they come around as a result of water turning to ice in the natural world, and can even move when they are completely frozen solid! They are truly breath-taking to witness. Here’s a few fun facts about glaciers to help clue you in on what they might be hiding…

Glaciers take hundreds and hundreds of years to form – it’s a very slow process! You’ll normally find that glaciers amass as a result of snow compression over the centuries.

2. They’ve been around for a long time, too!

Some glaciers are said to be more than a few million years old! For example, the immense Antarctic Ice Sheet is said to be the absolute oldest, with an age that clocks in at around 30 million years!

3. We really do rely on glaciers.

Glaciers are immensely important to our life here on Earth. That’s because they actually make up around 75% of all fresh water on the planet. 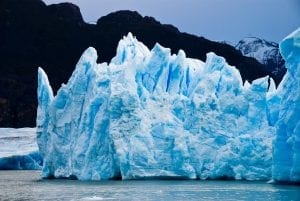 Due to the progression of climate change, around nine out of ten glaciers on Earth are melting. Add that to the fact above about fresh water supply, and you’ll clearly see why there is a lot of worry about the future of the planet…

5. There are lots of glaciers out east, too.

Glaciers are actually found all over the globe, not necessarily at the poles or the coldest reaches. They can be found in 47 countries at present – even over in China, which has more than 31,000 in total!

Glaciers make up an incredible portion of the Earth’s surface. That’s because they generally account for 10% of the outer crust – eye-opening stuff!

7. Alaska has lots of glaciers.

As you might imagine, Alaska is home to quite a few glaciers of its own… it’s said to have over 100,000 different glaciers statewide.

8. Antarctica is home to the biggest glacier on the planet.

The biggest glacier on Earth can be found out in the Antarctic reaches. That’s where you’ll find the Lambert Glacier, which is said to be more than 270 miles long – that’s 435km, for those of you keeping up with the metric!

9. When the glaciers melt, it’s game over.

What happens when all the glaciers melt? It’s not pretty. You’ll find that the ocean levels will rise by up to 230 feet, or 70 meters. That means entire cities will be underwater – life on Earth as we know it would perish, at least life on land, in any case! 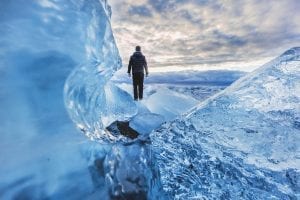 Glaciers are able to move only thanks to slight shifts in gravity beneath the ice. Believe it or not, they have the ability to travel up to 50 feet in a single day – and you can even see it happen!

11. They split off icebergs regularly.

Glaciers are, ultimately, responsible for creating icebergs. Icebergs can split away from glaciers and float into the ocean, proving to be very hazardous – a certain Titanic, for example, soon found that out. 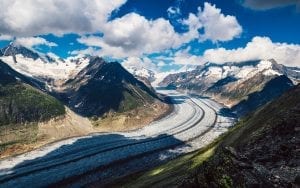 Washington remains the glacier capital of the US – its glaciers produce an incredible 1.8 trillion liters of H2O per year!

Where are glaciers found?

Just about everywhere! Believe it or not, there are even glaciers out towards Africa. Strange but true!

What are glaciers made of?

Glaciers are made of ice, snow, water and sediment - a chilly mix!

Is it safe to drink glaciers’ water?

No - it may contain parasites and all kinds of hidden nasties - so make sure to stay away unless it’s been filtered.

Do you know any fun facts about glaciers? Share them in the comments below!

This page was last modified on November 19, 2021. Suggest an edit