Goats are quirky creatures – often grouped in with sheep, llamas and other white and wooly grass-munchers, there is perhaps more to the humble goat than you might imagine! They have been a part of our domestic and farming lives for longer than we can remember. However, how much do you really know about the humble goat? Here’s some interesting facts about goats to help break things down for you.

Goats are much like dogs in that they can actually learn certain words! Specifically, it’s been proven that a goat will learn its name and will come when you call it!

Goats have unique calls and voices. This is thought to be how mother goats can tell their kids apart after birth.

It’s considered very unhealthy to keep just one goat on its own. They are prone to feeling depressed if they don’t have any buddies to hang around with! 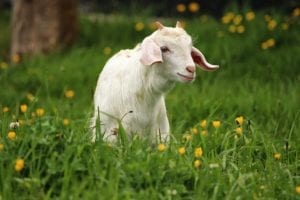 4. However, they can survive on their own.

That said, they are much more independent than sheep, which choose to flock together constantly. A goat will often enjoy heading off for a lone forage and for an adventure.

Goats have very interesting eyes – just look at them close-up! They have pupils which are rectangular, not round. This helps them to achieve near 360-degree vision, a quirk of evolution that comes in very handy!

Interestingly enough, it’s thought that goat milk is the most popular milk from any animal across the globe.

7. Goats should never keep grazing from the same spot.

Believe it or not, it’s never a good idea to encourage a goat to graze. They are likely to get sick or develop problems if they simply graze on grass. Instead, they should be given the chance to roam and forage.

Domestic goats can reach up to 250lbs in weight, though there are thought to be around 200 different breeds currently homed across the world. Mountain goats tend to be a little trimmer, weighing in at up to 180lbs.

9. Goats take care of themselves.

Goats tend to be very clean animals and will eat cleaner than most other farmyard animals. 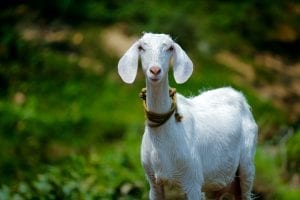 Goats will only ever eat vegetation as true herbivores. However, they will normally stick to a diet rich in grass, as well as various plants. However, let a goat into your house and they will generally have a munch on anything it doesn’t think is meat!

Unlike sheep, most goats won’t ever need shearing. Therefore, you can keep a goat without ever needing to get the clippers out!

12. Not all goats are born with horns.

It’s not uncommon for goats to be born without horns, though some naturally receive their stalks from birth. 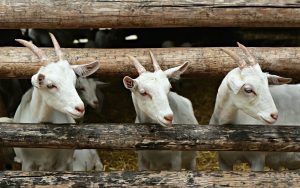 13. Goats are related to antelopes.

Goats are actually thought to be closer to antelopes in terms of species than sheep.

14. They have healthy life spans.

Goats will generally live to be around eight years old on a healthy diet, however, some have been known to live as old as 15.

15. Event the ancient pharaohs liked having goats around!

It’s thought that the ancient Pharaoh Cephranes was so enamored with goats that he chose to have a herd of them buried with him in his tomb – over 2,200 of the animals, in fact! 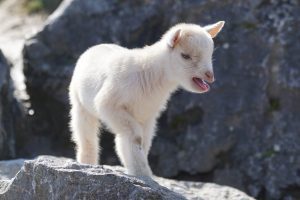 They can! They are very friendly in general - and they can help to keep your grass low!

Are goats expensive to keep as pets?

On the whole, you can expect to spend around $20 per week on keeping a goat - measure this with your cat and dog bills!

What smells do goats avoid?

Goats really hate the smell of cow mess - who can blame them, really!.

Do you know any funny facts about goats?  Share them in the comments below!