Hamsters are cute little critters! They are popular pets with children and adults alike and tend to be very popular with those who are looking for low-maintenance, exciting animals to keep at home. Often very easy to please, to keep healthy, and to entertain, there are various breeds of hamsters that continue to find their way to homes all over the world.

Here are a few fun facts about hamsters that might just surprise you. Have a read-through before you adopt one of your own!

1. There are probably more hamster species than you think.

2. We’ve not been keeping them for long!

Hamsters have only been pets in the US since the 1930s. Funnily enough, they were first imported into the country from Syria back in 1936.

3. Hamsters evolved all over the planet.

They live in the wild, too. In fact, you will find wild hamsters all over the world. You can find them scurrying around China, Greece, and Belgium. Therefore, it’s not unheard of to see a rogue hamster on the run on the continent! 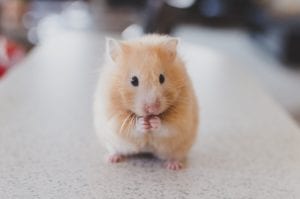 4. Hamsters really do stock up on food – it’s true!

A hamster is a food-hoarder by nature. They are able to cram pockets on the insides of their cheeks with food, meaning that they can easily access it for sustenance at a later time. They are much like squirrels in this regard.

Unlike many other creatures, a hamster’s teeth will never stop growing. Therefore, pet owners are advised to look for toys and treats which they can use to help wear down their teeth so they don’t get too long or pointy!

6. Hamsters can be quick learners.

7. They are pretty timid!

Hamsters tend to be shy, retiring creatures that will startle very easily. Therefore, it is always a good idea to move slowly around them and to use a soft tone of voice when speaking to them.

Hamsters tend to eat all fruit and vegetables, though they don’t make up the majority of their diet. It’s good to vary things a bit with prescribed hamster food.

Hamsters love exploring and running around. That’s why so many pet owners build mazes and set up wheels for them – they really are little bundles of energy! 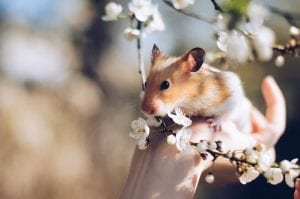 10. It’s rare you will see a hamster being too active during the day.

Hamsters are actually nocturnal, which means it is most likely that you will see or hear them during the night. If you sleep in the same room as a hamster, don’t find it too surprising to hear their wheel spinning around after dark!

Believe it or not, it is illegal for you to own a hamster in some states of the US. In California and Hawaii, for example, you won’t be able to take them home with you. There’s a very specific reason for this, and it’s because hamster breeding in the wild could cause serious issues for the states’ ecosystems.

12. A hamster in the wild will eat just about anything.

Wild hamsters are omnivores and are known to feast on frogs and lizards! However, domesticated hamsters will normally eat corn and nuts, though you should make sure to keep their diets fairly rich in protein. 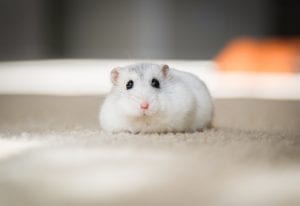 13. Hamster gestation is over and done will fairly quickly.

A hamster pregnancy is extremely short, in that it will generally last between two and three weeks.

14. Their names are German!

The word hamster actually derives from a German verb. The verb in question, ‘hamster’, literally translates as ‘to hoard’. That, of course, describes how hamsters generally handle their food!

Hamsters tend to prefer sleeping in small, tight spaces, which is why it is perfectly reasonable to set up little dens for them in the housing you set up. They like to feel safe, but to give them extra security, make sure you use paper shreddings or anything guaranteed to be free from dust. 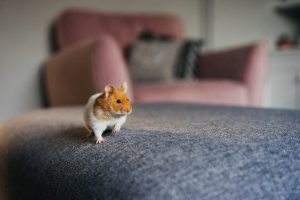 Hamsters have terrible eyesight! They are born without sight at all, and even when they grow up, they are remarkably short-sighted. Chances are it will only be able to see you if you’re up really close. Don’t frighten them!

On the whole, yes - they won’t need much caring for, and they are extremely cute!

Yes! However, it’s rare you’ll get bitten by a hamster, as they tend to only nibble when they are frightened. In any case, don’t encourage the behaviour!

Do hamsters ever need to bathe?

No - they are amazingly clean - though the odd spot clean may be necessary.

Do you know any fun facts about hamsters? Share them in the comments below!

This page was last modified on February 11, 2022. Suggest an edit