Hermit crabs are curious little critters that are probably best known for carrying their homes on their backs! You’ll find them in tropical reaches as well as in colder climes – and they don’t tend to be sought as food by fishermen. In fact, there’s probably plenty about these creatures that might just surprise you! Here’s some fun facts about hermit crabs to help inspire your curiosity.

Hermit crabs are decapod crustaceans from the family known as ‘Paguroidea’.
There are two groups in this family, determined by habitat in which they choose to live. One is aquatic, the other terrestrial. 1,100 species are included in these groups!

Hermit crabs live and work in teams. In the wild, they usually search for food by exploring in pairs or groups. They also sleep close to each other, often piling on top of one another!

Researchers suggest this is a form of protection to deter predators. Forming a sizable mound may put off a potential attacker – sometimes fooled into thinking the heap nearby is simply too big to tackle! 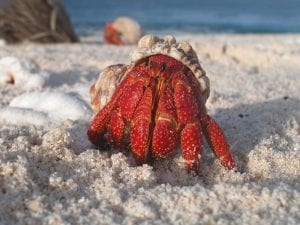 Studies show that, as hermit crabs grow, they search for replacement shells. They thoroughly check new shells, raising and turning them several times.

Sometimes they compete over a prospective new shell, too!

5. The mating process is a little odd.

Hermit crabs mate by pushing their stomachs together. Initiated by males, females then support sometimes hundreds of eggs simultaneously! As they grow, they begin to hang outside her body, attached to her abdomen until they hatch!

Hermit crabs are popular pets. They require a moist atmosphere to remain healthy, feeding once per day and some toys to play with! They enjoy exploring, so rocks, pieces of bark or rope keep them amused.

Hermit crabs have sweet teeth – they love bits of fruit or crushed cereal! As pets, they normally demand a varied diet.

8. Powdered food may sometimes be recommended.

If you keep hermit crabs as pets, keep in mind that they may sometimes have claws that are too small to grasp certain pellets. Therefore, you may need to buy them powdered food instead.

9. Be careful with hermit crabs when washing them.

Hermit crabs don’t necessarily spend too much time in water – they can drown! It’s a main reason why you need to be careful when bathing them as an owner.

On the whole, an adult hermit crab can expect to hold its breath underwater for up to an hour. Not that they have contests, or anything! 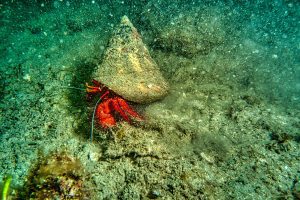 Hermit crabs do tend to be quite sensitive when it comes to temperature. Generally, they will thrive in conditions anywhere between 72 and 80 degrees Fahrenheit. They can go into hibernation mode if their temperature drops much lower, so be careful.

Hermit crabs can live to a ripe old age in the wild, sometimes up to 30 years of age. Of course their age will vary if you keep them as pets, so keep this in mind. They can often die around four or five years old despite being healthy.

12. How do you tell the genders apart?

Female hermit crabs tend to have dots on the underside of the bodies, whereas the males don’t. 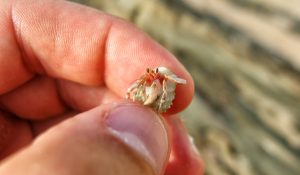 Hermit crabs have five pairs of legs! Two are used to grip their shells, two are for walking, and one is for grabbing food.

Is it bad to keep hermit crabs?

No, not always, but they tend to do well in large groups, meaning you should do best keeping several together, rather than just one.

You can easily set up a fish tank with wrasses, clownfish and gobies alongside your hermit crabs. However, you need to be careful with betta fish as they can be very aggressive.

How many hermit crabs should I keep?

It’s recommended that you try and keep around three hermit crabs at least - to keep them happy and engaged!

Do you know any fun or interesting facts about hermit crabs?  Share them in the comments below!