A hippopotamus may look cute and cuddly, but there’s far more to these majestic beasts than meets the eye. Take a look at these fun facts about Hippos and you’ll never look at them the same way again.

2. Hippos have to deal with intense heat.

They get so hot that they spend most of their day cooling down in lakes and rivers with just their eyes and nose above the waterline.

3. There are extra perks to cooling down.

As they sweat they secrete a red oil which protects them from sunburn and blistering. 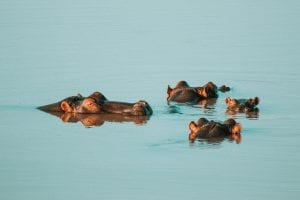 A male hippo can measure 3.5 m long by 1.5 m tall and weigh anything up to 3,200 kg. This makes them the second largest land animal alive today, second only to the elephant.

5. Sadly, there’s fewer around now than before.

Whilst they used to be all over sub-saharan Africa, today they’re largely confined to a small number of protected areas in the East.

They like to eat at night when it’s cooler and can easily chomp their way through 35 kg of grass in one sitting.

7. They’re kings and queens of capsizing.

Hippos are strong swimmers and can easily hold their breath for 5 minutes. When they’re underwater their ears and nostrils fold shut to keep every drop of water out.

A single dominant male can command a herd of up to 20 other hippos.

The other males in the group will typically be non breeding males, with the majority of the herd made up of the dominant male’s female mates and associated offspring.

When the dominant male wants to warn off challengers he opens his mouth fully to display his sharp teeth and lets out a series of loud grunts. He will also splash violently in the water.

Female hippos will typically give birth every 2 years.

11. They have long lives in the wild.

A wild hippopotamus will typically live for at least 40 years.

When hippos defecate they swing their tails from side to side to scatter their droppings and mark their territory. 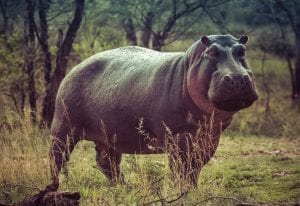 What makes hippos so dangerous?

It’s not just the fact that they have a fatal bite - they are very erratic and unpredictable - steer clear of a hippo on land.

Does the hippo have a predator?

Despite being built like submarines, hippos are prey for lions, crocodiles and hyenas - however, they tend to prey on young hippos, as the adults will crush them!

Not always, though it’s not unheard of - they mainly chow down on grass.

Do you know any fun facts about hippos? Share them in the comments below!