Hovercrafts are amazing inventions which allow you to traverse plains of water — in fact, they’re a real water glider – and there are plenty of things you should know about hovercrafts before you try and charter one for yourself! Take a look at a few fun facts about hovercrafts to clue you in on what you can expect.

A hovercraft works by effectively floating above water. This means that it runs with a special engine that forces the vehicle up above the water and which also propels it along. As you can imagine, that’s going to take plenty of thrust.

2. But – how does a hovercraft actually work?

It works by sucking in air from its rear fan(s), and the blowing or transferring this underneath. Effectively, it is a very clever way to take in air from one side of the vehicle and to transfer it elsewhere to provide a double thrust of sorts.

3. You can use hovercrafts off the water as well!

A hovercraft isn’t just ideal for using on water, as it will also work on land. It can be very useful to help you get across large patches of ice or even swampland, too. Some even use hovercrafts in desert situations where sand is too risky to traverse any other way. 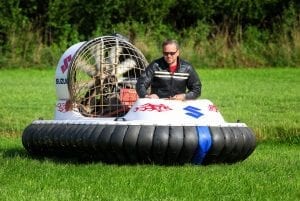 4. Hovercraft racing has been around for decades!

There have been many different engines put to use in hovercraft over the years. For example, some innovators and drivers have set up craft with lawnmower engines! However, heavier models for military use, for example, can use rows of engines with up to seven or eight of them working at once.

6. One hovercraft is likely to be very different from another.

Hovercrafts have a variety of different names and monikers, for example, you may see them referred to as skimmers from time to time. The reason for this should be pretty obvious – they skim across the water like stones!

7. Riding a hovercraft is a cushioned experience!

A hovercraft will slightly touch the surface of water or land it moves itself along. It rides on an air cushion of sorts.

8. You can use a hovercraft for many different reasons.

Hovercrafts are used for various different purposes, for everyday recreational use as well as for commercial and military reasons. For example, many people use hovercraft for surveys, dive rescue and recoveries, cross-terrain transport, swamp, and ice rescue, heavy equipment transfer, oil cleaning, bird rescue and more besides. Many people use hovercraft to get the thrill of flying without needing to take up any kind of formal license. It’s a really safe way to travel!

9. The hovercraft dates back to around the 50s.

Hovercraft have only really been around since the 1950s thanks to the innovator Sir Christopher Cockerell. However, the ideas and concepts behind hovercraft travel have actually been in motion since the 1870s. Thankfully, technology had progressed enough by the 1950s for Cockerell to perfect the ideas initially drafted by Sir John Thornycroft. 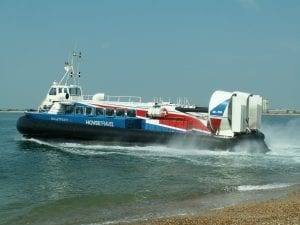 The fastest speed for a Navy warship was achieved by a hovercraft in the US forces in 1980. Weighing around 100 tons, the SES 100-B was able to speed up to a staggering 170 kilometers per hour.

Hovercraft can move quicker than you might think – despite how bulky and unwieldy some of them might look!

Generally, you can expect hovercraft to hit speeds of around 56 kilometers per hour, however, general max speed for lighter, more contemporary systems might reach up to 112 km/h.

12. There are many different records.

There is a separate record for the fastest hovercraft, and that belongs to Bob Windt. He claimed the accolade in 1995, sailing his own DiscoverHover One machine down Portugal’s Rio Douro. He achieved a blistering speed of 137 km/h on water – that’s truly eye-watering. 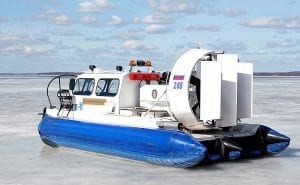 Other parts of the hovercraft include the hull and the skirt. A hovercraft hull is made from toughened material such as fibreglass or aluminium, whereas the skirt is made from a looser material built and coated to interact with water.

Hovercraft tend to be extremely bulky, which is why it’s all the more impressive that they can glide as smoothly as they do! You’ll find that some hovercraft can weigh in at up to 200lbs for recreational use, whereas military models drift into the tons. 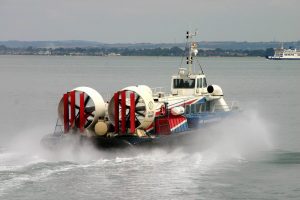 Can a hovercraft fly?

Technically, they do so by design! Hovercrafts can generally fly a few inches off the water.

Can a hovercraft sink?

You normally won’t have to worry about a hovercraft sinking if it comes to a stop, even if it is waterlogged.

Generally, you can expect the average hovercraft to consume around three gallons of fuel per hour, making it impressively efficient.

Do you know any fun facts about hovercraft?  Share them in the comments below!